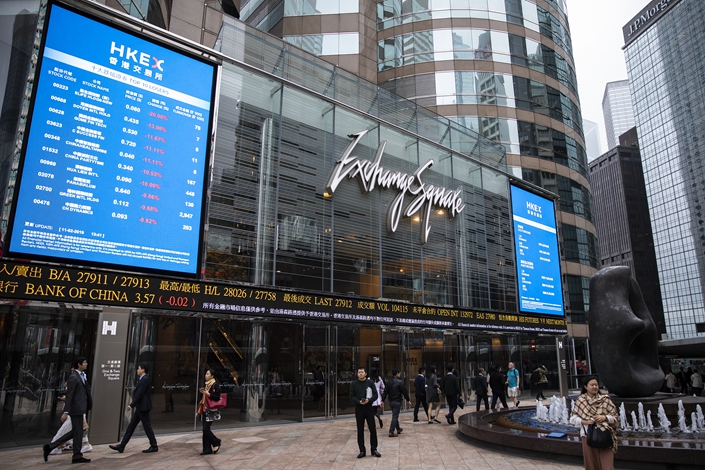 Hong Kong’s benchmark Hang Seng Index hit an intraday high of 30,280.12 on April 15, but has been trending lower for nearly four and a half months. It’s now down more than 15% from its peaks. Photo: VCG

The value of Hong Kong stocks bought by Chinese mainland investors has exceeded the value of the stocks they sold for 16 consecutive weeks, the longest streak for around a year and a half.

Amid volatility on the Hong Kong stock market, there has been a net inflow of mainland capital to the bourse via the Stock Connect programs — which link the region’s market and mainland exchanges.

The total size of the net inflow, which is calculated by subtracting the value of stocks sold from the value of stocks bought, reached HK$129 billion ($16.4 billion) since the streak began in mid-May, as of Thursday. That’s according to Caixin calculations based on information from data provider CEIC and Hong Kong Exchanges and Clearing Ltd., which operates the Hong Kong bourse.

During this streak, Hong Kong’s benchmark Hang Seng Index dropped 8.6% and was down 15.1% from an intra-day high of 30,280.12 on April 15, as it takes a beating amid ongoing China-U.S. trade tensions and social unrest.

A large amount of capital flowing into Hong Kong is not unusual. However, this is the longest streak since the 26-week run that ended in February 2018, after the market hit a record intra-day high the previous month.

The growing southbound flow is to be expected, given the falling stock prices in Hong Kong, an analyst working for a mainland-funded asset management company in the city told Caixin. The value of the net inflow in the first half of 2019 is still within the normal range, compared with what was seen before, the analyst said.

The value of southbound capital surged in August due to the sharp decline in Hong Kong stocks during the month, which provided investors with speculation opportunities, the analyst said. Also, the surge may have been influenced by the yuan’s depreciation, as investors are likely to have sought out overseas assets to offset the yuan exchange rate risks, they said.

In Depth: Why Hong Kong Faces a Recession

Historically speaking, as share prices in Hong Kong drop, more mainland capital flows in, according to a note by ICBC International Holdings Ltd. The spike in mainland capital can help stabilize the stock market, the note said. Since the start of August, the Hang Seng Index has dropped 7.4%.

Despite the streak, some analysts are gloomy about the market’s outlook. There has been an overall net outflow of overseas capital from Hong Kong since 2019 began, according to a report by French investment bank Natixis SA Thursday.

Based on the current economic situation, the Hang Seng Index may drop to 24,400, and if a global recession starts in the next few months, it may fall as far as 17,630, according to a report by investment bank Morgan Stanley.