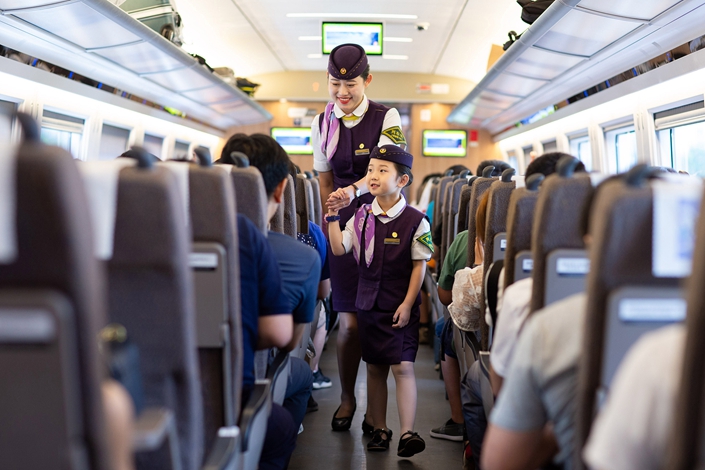 A child accompanies an attendant during her duties on Aug. 27. Photo: VCG

China’s services sector expanded at the fastest pace in three months in August as the growth of new business orders placed with services providers picked up, a survey showed Wednesday.

The Caixin China General Services Business Activity Index, which provides a snapshot of operating conditions in the country’s services sector, rose to 52.1 in August from 51.6 in the previous month. A reading above 50 indicates expansion, while anything below that signals a contraction.

The Caixin China Composite Output Index, which covers both manufacturers and services providers, inched up to 51.6 in August from 50.9 in July, in part driven by faster growth in the services sector.

The gauge for employment in the services sector rose to the highest since June 2018. Companies that hired additional workers generally attributed this to the expansion of capacity and the expectation of improving market conditions, according to the survey.

Total new business orders placed with services providers rose at the fastest pace since April, while their new export business expanded at a slower pace than the previous month.

Services providers’ input costs and the prices they charged rose at a faster pace than the month before. Zhong said this implied “an enhanced upward trend in prices.”

The measure for business activity expectations in the services sector increased to the highest since March with companies attributing the optimism to expectation of “improving market conditions, rising business targets and greater investment,” according to the survey.

“However, the Sino-U.S. trade conflict remained a drag, and business confidence remained depressed,” Zhong said. “Still, there’s no need to be too pessimistic about China’s economy, with the launch of a series of policies to promote high-quality growth.”

The services sector, also known as the tertiary sector, includes finance, real estate services, marketing, transportation and retailing. In the first half of this year, the sector accounted for nearly 55% (link in Chinese) of China’s gross domestic product.