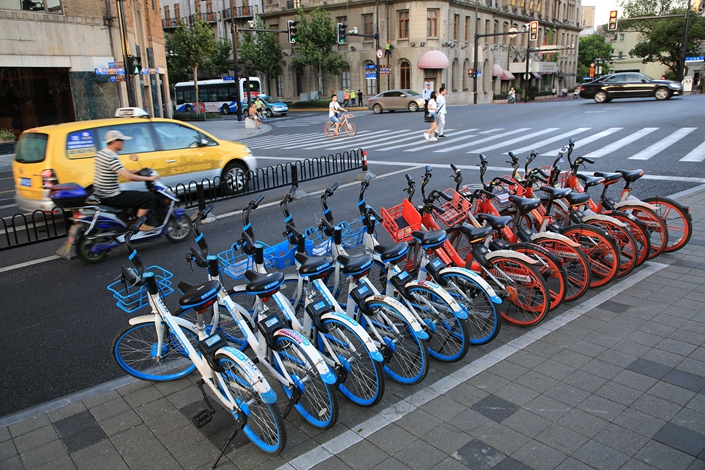 Shared bikes stand in a neat row on a Shanghai sidewalk on Aug. 2. Photo: VCG

Shanghai has come up with an assessment regime for bike-sharing firms, as governments around the nation try to get a grip on a sector that has gone from boom to bust in recent years and flooded streets nationwide with bikes in the process.

Local government departments — including Shanghai’s transportation commission, urban management bureau and public security bureau — jointly released on Monday a list of 25 criteria by which bike-sharing firms will be judged, saying that assessments will be carried out every six months.

The criteria include whether the companies’ bikes are parked in an orderly manner, the condition of the bikes, the companies’ compliance with government policy and their “corporate credibility.”

Companies that perform below a certain level twice will be forced out of the city’s market, Shanghai said.

In August 2017, the city capped the number of bikes on the city’s streets to prevent further overcrowding.

The new rules also specify how new bike-sharing firms can enter the market. First, companies must apply to the transportation regulator for a six-month trial. During the trial, they will be allowed to put bikes in no more than two of the city’s districts, with their quota set at no more than 5,000 bikes in downtown areas and 15,000 in suburban areas. If the trial is judged to be a success, they will be allowed to expand to the entire city.

Several other cities including Tianjin, Chengdu and Guangzhou have unveiled similar assessment regimes since last year.

Growth of China’s bike-sharing market has slowed down, and many of the first wave of startups have either gone bust or are struggling under a mountain of debt, leaving piles of rusting bikes sitting on the outskirts of cities around China.

The sheer number of dockless shared-bikes has been a headache for local authorities for a few years — Beijing cleared over 388,000 shared bikes from its streets in the first half of 2019 alone.