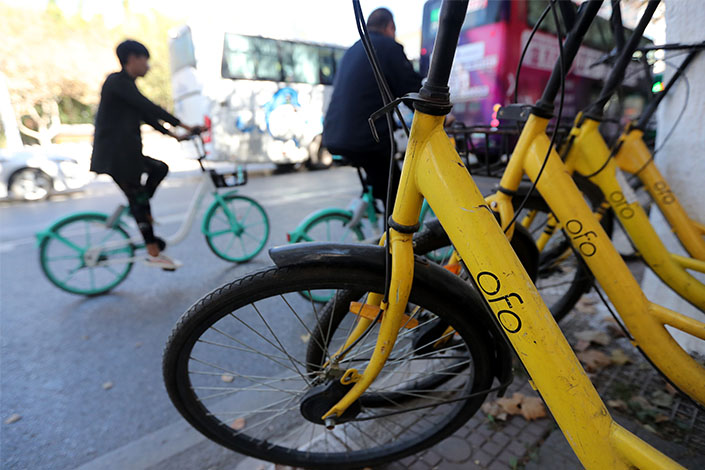 A top executive at one of the main operations arms of shared bike company Ofo has been barred from leaving China, the latest setback for a former superstar now struggling to stay in business after burning through millions of dollars in investor cash.

A Shanghai court took the action against Chen Zhengjiang, a top executive at Dongxia Datong (Beijing) Management Consulting Co. Ltd., for failing to perform his duties with regards to the company’s debt, according to a notice issued this week on a Shanghai court website. The order, which referred to Chen as an “executive” without a more specific title, was made following a request from a company that said it was owed 120,000 yuan ($17,300) by Dongxia Datong.

China occasionally takes such restrictive actions against financially struggling company executives to prevent them from leaving the country in the event of future criminal and civil complaints. It also occasionally restricts such companies and their executives from making big-ticket purchases and spending on other expensive items such as air and first-class rail tickets.

An Ofo spokeswoman had no comment on the latest court order.

Numerous Ofo executives, including founder Dai Wei, have been blacklisted by various Chinese court orders, a designation that bars them from engaging in spending that can include plane travel, staying in luxury hotels and sending their children to expensive private schools.

Ofo has become a poster child for a wave of boom-bust cases over the last five years in China’s shared economy sector, offering everything from Airbnb-style homestays to shared rides and even umbrellas and basketballs. Investors have collectively pumped billions of dollars into the space, even though some areas such as the shared bikes operated by Ofo never had a sustainable business model.

Unlike traditional municipal shared bike services, offerings from the likes of Ofo, Mobike and others allowed users to borrow bikes anywhere they could find them and then unlock them using GPS technology. After ending rides, users would lock their bikes wherever they wanted and be charged a small fee based on how long they rode.

Ofo fought a bloody battle with rival Mobike over the last three years, each raising hundreds of millions of dollars and using that money to put millions of loaner bikes on streets in China and around the world. But the cash stopped flowing abruptly as investors got tired of losing money and forced the companies to survive on their own resources.

Last year Mobike was acquired for $2.7 billion by online-to-offline services giant Meituan Dianping, which since then has been looking for ways to make the unit profitable. In December, Ofo made headlines when large numbers of people started lining up outside its offices demanding refunds of their deposits ranging from 100 yuan to 200 yuan.