By Du Caicai and Denise Jia 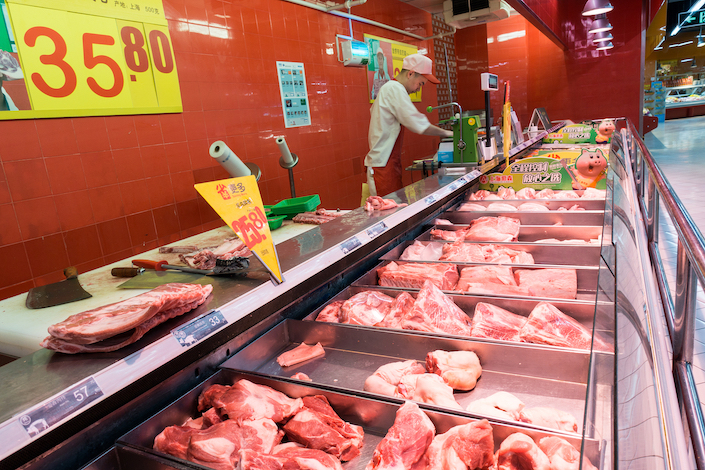 China vowed to meet its population’s meat demand by increasing pork production amid a devastating outbreak of African swine fever that has wiped out about a third of its hog herds and sent pork prices to record highs.

“To solve the meat consumption problem, we must stick to the principle of self-sufficiency on pork production,” said Yu Kangzhen, a vice minister for agriculture, at a press conference Wednesday in Beijing.

On Tuesday, the State Council issued guidelines to support the pork industry, outlining measures such as increased subsidies to boost domestic production, and setting a 95% self-sufficiency target for pork supply. Yu said that target was set because imports are far from meeting Chinese consumers’ pork demand.

Pork is the main meat consumed in China, accounting for more than 60% of the country’s total meat consumption. Since the first case of African swine fever, a deadly pig disease for which there is no cure or vaccine, was reported in August 2018, the virus has spread to every provincial-level region in China.

In July, the number of pigs dropped more than one-third from the previous year, official data showed. Meanwhile, the average pork price surged 46.7% year-on-year in August, the fastest pace in more than eight years, after a 27% spike in July, pushing consumer inflation to a 17-month high.

According to Yu, total global pork exports last year were 8 million tonnes, less than 15% of China’s production of 54 million tonnes.

“Even at its highest level, imports accounted for about 2% of China’s domestic production,” Yu said, “That’s why we set the 95% self-sufficiency target.”

Yu said the African swine fever situation is still “severe” and risks are still “very high,” even though the number of cases declined from last year.

At a meeting of the State Council Wednesday, Premier Li Keqiang emphasized that the pork supply is one of the government’s top priorities now.

China’s state planner also issued a series of measures to support hog production. It will issue subsidies of as much as 5 million yuan ($700,000) to support the construction of large pig farms.

Peng Shaozong of the National Development and Reform Commission (NDRC) said Wednesday at the press conference that the state planner has arranged 4.8 billion yuan to help counties treat pig and poultry manure.

The NDRC has also directed local governments to reserve frozen pork to ensure sufficient supplies for this week’s Mid-Autumn festival, as well as for the coming October holidays and Lunar New Year, Peng said.