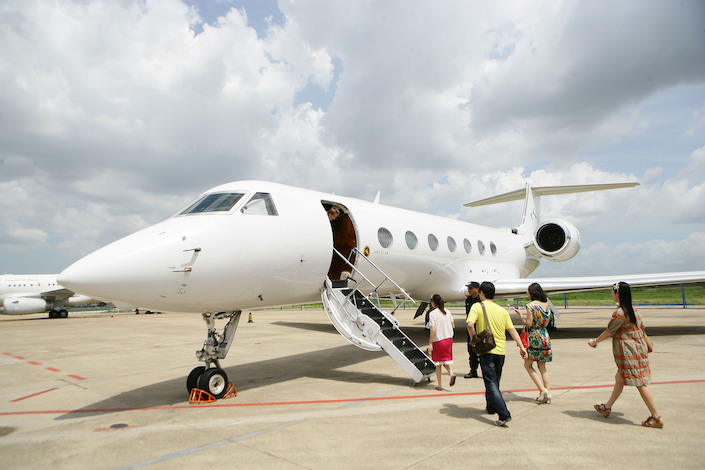 A Gulfstream G550 business jet has become a luxury icon for some of China’s wealthiest businessmen. But for cash-strapped solar energy conglomerate Hanergy Holding Group Ltd., it means a lawsuit.

A court document released Wednesday showed that a financial leasing company took Hanergy to court for millions of dollars of unpaid rent on a leased luxury jet, underscoring the solar firm’s financial plight.

A court ruling in December required Hanergy to repay 70.9 million yuan ($10 million) of unpaid rent to Comsys Wanyi (Tianjin) Leasing Company Co. Ltd. plus a daily default fee since the verdict was issued, according to the court document.

Founded by Li Hejun in 1989 as a hydropower producer, Hanergy later shifted its business focus to thin-film solar modules and quickly expanded its business to the entire industrial chain, including manufacturing and solar park development.

Li was the Chinese mainland's wealthiest man before losing about $14 billion of his personal fortune in May 2015, when shares of Hanergy’s Hong Kong-listed arm Hanergy Thin Film Power Group Ltd. collapsed amid investor concerns about the company’s debt overhang and unusual stock movements.

Floated in Hong Kong through a back-door listing program in 2013, Hanergy Thin Film saw its shares skyrocket 10-fold between 2013 and early 2015. But on May 20, 2015, a massive sell-off wiped out nearly half of Hanergy Thin Film’s market value within the first 70 minutes of trading.

In June this year, Hanergy Thin Film was officially delisted from the Hong Kong bourse after four years of trading suspension.

Once high-flying Hanergy and its affiliates have struggled to deal with a capital crunch over the years and have largely delayed wage payments, Caixin has learned. In early August, Hanergy’s controlling stake in its main cash cow Jinanqiao Hydropower Station in southwest Yunnan province was listed for auction by a court to repay debts. A Supreme Court information system showed that Hanergy still has 16 billion yuan of debts to repay under court orders.

According to the verdict regarding Hanergy’s aircraft lease dispute with Comsys Wanyi, the two companies signed a leasing contract on a Gulfstream G550 for 237 million yuan in June 2015. Hanergy agreed to pay 15.6 million yuan to 15.7 million yuan every quarter.

According to Comsys Wanyi, Hanergy paid a 15 million yuan deposit and 55.54 million yuan of rent by September 2016, including a partial payment in March 2016. Hanergy stopped any payments since November 2016.

Comsys Wanyi said it sent six requests to Hanergy demanding payment but got no response. In December 2016, Comsys Wanyi required termination of the contract and filed for arbitration with the China International Economic and Trade Arbitration Commission the next year.

Hanergy “maliciously” refused to return the aircraft, said a person close to Comsys Wanyi who declined to be identified. Comsys Wanyi seized the plane when it stopped in Las Vegas, the person said.

According to the court document, Comsys Wanyi stated that it was “forced” to take legal measures to repossess the plane in June 2017 when it landed at the Signature Flight Center in Las Vegas. The company said it spent 1.64 million yuan in related fees for the move.

Publicly available records showed that a court hearing was held in November on a financial leasing dispute between China Minsheng Financial and Hanergy.