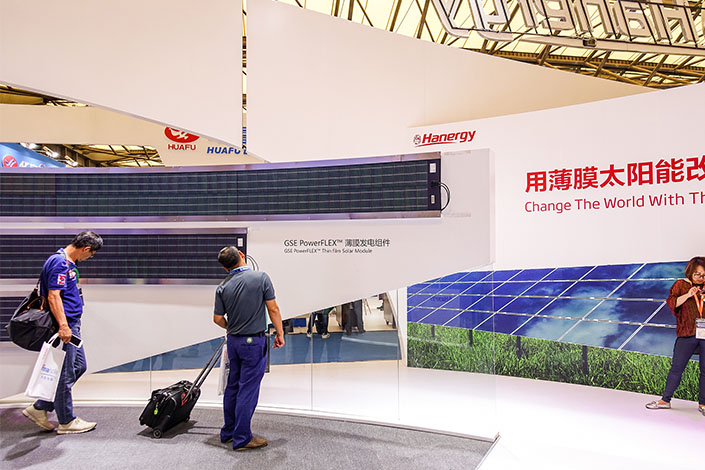 Visitors stop to examine the Hanergy booth at an exhibition in Shanghai on May 28. Photo: VCG

Four years after its shares were suspended, Hanergy Thin Film Power Group Ltd., the Chinese solar power equipment-maker tied to a prominent Chinese billionaire has finally accepted that its name will be erased from the Hong Kong bourse.

Hanergy Thin Film was officially delisted there at 9 a.m. Tuesday, the company said in a statement. That’s in line with its announcement last month that it would go private.

Shares in Hanergy were suspended in 2015 following an abrupt stock plunge in May that year that triggered an investigation by securities regulators.

The delisting came after the company failed to meet regulators’ conditions in seeking a resumption of trade. It was unable to come up with an acceptable resumption plan, Caixin learned from a source with knowledge of the firm, in part due to its failure to present an independently audited financial report. The company’s opaque ownership structure has also been of major concern, sources said. Hanergy Thin Film is still controlled by founder Li Hejun, who owns an 80% stake in the company, according to the sources.

Floated in Hong Kong through a back-door listing program in 2013, Hanergy Thin Film has undergone a roller coaster rise and fall over the past few years. The company saw its shares skyrocket in the two years before the crash, rising tenfold between 2013 and early 2015.

But then on May 20, 2015, a massive sell-off wiped out nearly half of the company’s market value within the first 70 minutes of trading amid concerns of stock manipulation and worries that Hanergy would be unable to pay off its debts. Li was the Chinese mainland’s wealthiest man before he lost about $14 billion of his personal fortune in the debacle.

Still, after the privatization, Hanergy Thin Film has said it would seek a listing on the mainland.

Shares belonging to existing shareholders will be temporarily transferred to shares of a British Virgin Islands-based unit of parent Hanergy Holding Group Ltd.

Another affiliate of the parent company would seek to float on the mainland and then buy shares from that British Virgin Islands-based unit, the company said last month.