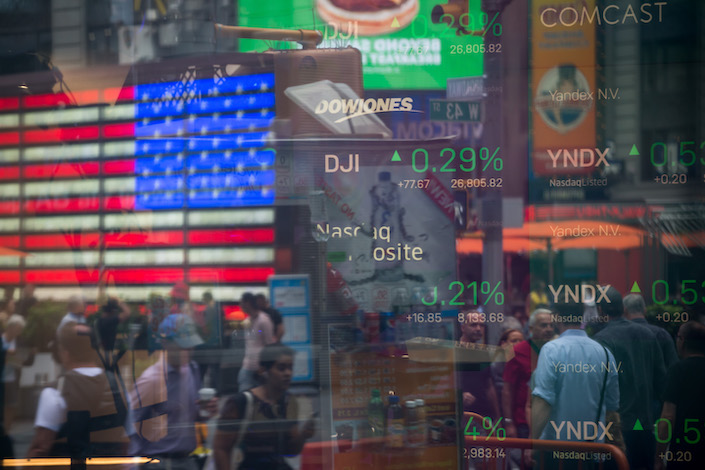 (Bloomberg) — Executives from the biggest U.S. financial institutions, including JPMorgan Chase & Co. and Goldman Sachs Group Inc., met with top regulators in Beijing in a sign that the trade war with the U.S. has done little to derail the opening-up of China’s $43 trillion financial system.

Among those attending meetings at the Ritz-Carlton hotel on the city’s Financial Street were Yi Gang, governor of the People’s Bank of China, and senior officials from the China Securities Regulatory Commission, according to an agenda seen by Bloomberg.

Even as the Trump administration’s trade war rages, China has continued to open its financial sector at an unprecedented pace, luring global banks seeking to compete for an estimated $9 billion in annual profits. While the policy has often been cast as addressing U.S. complaints that the Asian nation has been a one-sided beneficiary of trade, domestic motivations are also behind the push, said Michael Pettis, professor of finance at the Guanghua School of Management at Peking University.

“China is very determined to reform its financial markets and knows that without the major American players, it is very hard to talk about having a truly internationalized market,” he said. “It also makes sense for China to accommodate a very important source of lobbying support, especially as there’s so little in the U.S. right now.”

Chinese regulators can’t ignore the country’s financial market issues. Corporate bond defaults reached a record high last year, and the balance sheets of the nation’s banks are swelling with ever more bad loans. Publicly traded companies have come under increased scrutiny as a spate of poor disclosures — from inaccurate IPO applications to an accounting “error” that wiped out $4.4 billion — left investors wary. Officials and academics say an influx of foreign competitors could help the industry get into shape and sharpen the focus on just doing business.

“Opening up is a way of putting pressure on financial-system reforms, especially considering the many competing interest groups,” said Li Haitao, dean’s distinguished chair professor of finance at Cheung Kong Graduate School of Business in Beijing.

Foreign enterprises wouldn’t be burdened by the policy-oriented tasks, such as lending targets for private businesses or rural industries that domestic companies need to heed, Zhang Chenghui, former head of the finance institute at the State Council Development Research Center, said at a recent conference in Yichun, suggesting that local financial institutions may be allowed to shed these duties as the market opens to foreign competition.

Senior Wall Street executives attended a meeting with Chinese policymakers in Beijing in September 2018, people familiar with the matter said at the time. That meeting was chaired by former PBOC Governor Zhou Xiaochuan and John Thornton, chairman of Barrick Gold Corp.

China’s transition to a more consumption-driven economy has led to a shrinking trade surplus — a trend that could be accelerated by the trade war. As more and more Chinese are also lifted into the middle class and beyond, the need for managing wealth is growing.

Daniel Rosen, a partner at Rhodium Group LLC, an economic research firm based in New York, said the transformation of China and the limits of its policies will most likely mean “trillions of dollars” in capital outflows in the years ahead.

“To avoid balance of payments challenges, Beijing needs to attract correspondingly large capital inflows and is plunging ahead with financial sector opening with this long-term reality in mind,” he said.

Crucially, opening-up could also allow China to make friends with people in the right places at a time of heightened political tension.

barring a major economic slowdown or change of course — foreign banks and securities companies could rake in profits of about $9 billion a year in China by 2030. The expanding ties between Wall Street and the Chinese market could make some of its executives important voices for China in Washington.

Even so, opening up the financial sector may not go far enough in addressing the core concerns of the current U.S. administration.

“You would need a full slate of credible reforms across core areas of political and national security concerns before you moved the needle in D.C.,” said Jude Blanchette, chair of China studies at the Center for Strategic and International Studies in Washington. “We’ve seen these narrower measures pretty consistently over the last year, and they have not had an impact on the U.S. position.”

There are still significant hurdles in setting up shop in China. The latest central bank data showed that foreign participation in the local financial market is still small, accounting for just 3.1% of the stock market and 2.2% of the bond market. Foreigners held 1.6% of banking and 5.8% of insurance assets as of May.

“Certain business license application processes, such as those for majority ownership in securities businesses, still require large upfront capital commitments and face a lengthy review process, many of which disadvantage foreign investors,” the American Chamber of Commerce said in its 2019 China White Paper.

Foreign financial executives also complain about the difficulty in competing against government-controlled rivals with longstanding relationships.

Friday’s meeting could help set the stage for high-level trade talks next month. China and the U.S. are in close contact to prepare for the discussions, Commerce Ministry spokesman Gao Feng said Thursday without giving details.

In the meantime, more opening is expected in China’s financial sector. Most recently, regulators allowed foreign companies to be lead underwriters for all types of bonds and to control entities including wealth management companies and pension fund managers.

“Further liberalization of China’s financial services market is in the interest of China’s regulators because it raises the standards of the overall domestic market,” said Jake Parker, senior vice president at the U.S.-China Business Council. “The U.S. is effectively pushing on an open door in this area.”