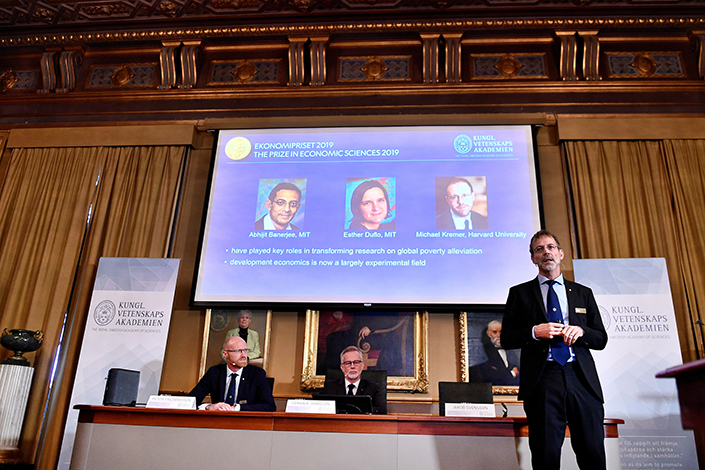 The three winners of the 2019 Nobel Prize in Economics get announced during a news conference at the Royal Swedish Academy of Sciences in Stockholm, Sweden, on Oct. 14. Photo: VCG

On Oct. 14, this year’s winners of the Nobel Prize in Economics were announced. Abhijit Banerjee, Esther Duflo and Michael Kremer won the prize for their work on fighting global poverty. Oct. 17 is the International Day for the Eradication of Poverty. The two appear to coincide, but in fact it shows that poverty reduction is a major problem facing society. The insights that the three scholars’ research methods and theoretical results can bring to China’s poverty alleviation efforts has caught the attention of academia and the public.

China’s poverty alleviation efforts have achieved worldwide recognition. Between 1978 and 2018, the number of people living in poverty has dropped from 770 million to 16.6 million, a contribution rate to global poverty reduction of more than 70%. The fundamental reason China has been able to achieve such a result is due to the rapid economic development brought by 40 years of the reform and opening-up policy, as well as the long-term importance that the central government has placed on the issue. The 19th Party Congress placed poverty alleviation as one of the three major battles in achieving a moderately prosperous society. While vigorously promoting poverty alleviation, the academic achievements of the three Nobel Prize winners are worth studying to learn how to better give play to the already great achievements.

China’s poverty alleviation efforts have gone through many stages, which have turned in recent years into “targeted poverty alleviation.” The central government has made great efforts to mobilize all forces across society to make progress in poverty alleviation, but overall it will still take the government’s leadership, the country as a whole, and concentration on major issues, supplemented by strict organizational and personnel measures. This model is in accordance with China’s current political and economic characteristics at this stage. China’s poverty reduction model has achieved remarkable results in just a few decades due to this model. However, this method may have other restrictions. For example, this method is not good at cultivating an endogenous economic development power in poverty-stricken areas; it is difficult to accurately calculate the cost-benefit ratio of massive investment; complex procedures have been necessary to solve the incentive problem among officials that have also caused headaches for grassroots organizations. There are tragic reports of local-level officials dying from the hardship of poverty alleviation efforts. Another question is whether the high intensity of investment of resources and energy is sustainable.

The economists’ use of field research was to observe and analyze the benefits of laboratory-style randomized, controlled trials. Their research was not satisfied with the correlation analysis of other researchers. Instead it prioritized finding causal relationships. It also required that all revenue assessments need to be combined with cost estimates. Obviously, if the top-down poverty alleviation method can be properly combined with a bottom-up approach followed by “random field experiments,” China’s poverty alleviation model will be more scientific, more effective and more sustainable.

In the future, poverty alleviation should pay more attention to the “bottom perspective.” The field experiments focus on specific projects, such as the impact of the construction of a reservoir on the income structure of people in the area, the effects of insecticide-treated mosquito nets on the malaria problem, and whether giving children anti-ascariasis medication will improve the attendance rate in class. These economists are more willing to spend their energy observing the life of the poor, understanding what they think, and how they see poverty reduction. This kind of equal perspective makes it easier to find the real needs of those living in poverty, resulting in more targeted support measures.

Additionally, the cost-benefit analysis should be further refined. In recent years, China has invested heavily in poverty alleviation. According to researchers’ estimates, in 2018 alone, the financial and policy support for poverty alleviation exceeded 1.2 trillion yuan ($169 billion). Officials from the State Council’s Poverty Alleviation Office predict that it will exceed 2 trillion yuan by 2020. How can this investment be used efficiently? Cost-benefit analysis is indispensable, and the Nobel Prize winners’ methods also have this advantage. In addition, their method is particularly wary of inappropriate policies due to cognitive errors. It believes that we can only formulate more effective policies, establish more reasonable mechanisms, and avoid corruption by carefully understanding the motives of those living in poverty, civil servants and other individuals. This clearly meets the needs of China’s poverty alleviation work.

After the announcement of this year’s winners of the Nobel Prize in Economics, there were many critiques in international academic circles. In fact, the winners themselves have been very clear about the limitations of their research and have listed six challenges, such as situational dependence, randomization and site selection deviation. The critics’ opinions are hardly beyond this range. Naturally, it is beneficial to carry out free academic discussions with critical thinking. However, for the Chinese government and academic circles, we should focus on this method with an open mind and try our best to absorb knowledge from international, cutting-edge research and combine it with the practice of China’s poverty alleviation.

The government aims to lift all rural poor people out of poverty by 2020. With strong leadership at the decision-making levels, we are confident that this goal can be achieved. It should also be noted that China will enter into a long-term war against poverty after winning this first battle: after the problem of absolute poverty is solved, China will face the problem of relative poverty. In fact, the difficulty of poverty alleviation is not falling but rising. How to prevent the poverty-stricken population from falling back into poverty, how to build more targeted and more powerful mechanisms to help the relatively poor groups are both problems that must be faced head-on. At the time of a decisive battle in poverty alleviation, the field experiments have won the prize, which will be helpful for China’s poverty alleviation efforts to open up to the future.