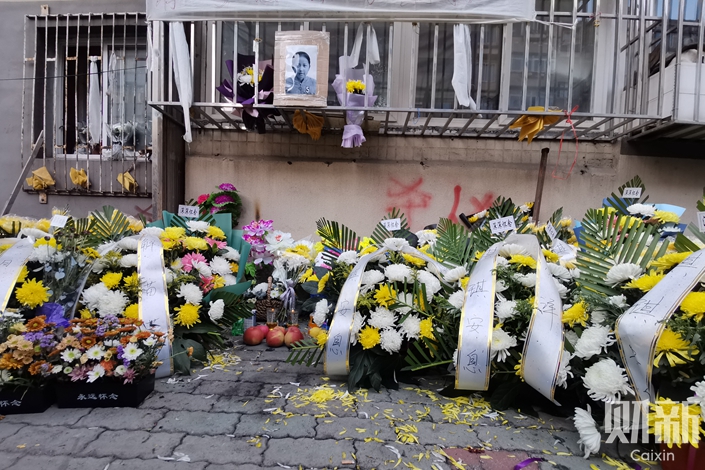 Flowers are placed in tribute to a murdered girl at her home in Dalian, Liaoning province, on Saturday. Photo: Qin Jianhang/Caixin

The case of a 13-year-old boy who confessed to killing a 10-year-old girl in the northeastern Chinese city of Dalian has reignited debate about how the country handles serious crimes committed by minors.

On Oct. 20, the boy confessed to killing the girl earlier that day. The girl was found in a bush near her home, Wang Jiuzhang, the girl’s father, told Caixin. Wang said her body had been found in a state of undress.

Wang said he had been told by the authorities that she had succumbed to her wounds after being repeatedly stabbed and there was evidence of sexual assault. A source with knowledge of the case confirmed that cause of death.

Local police announced Thursday that the boy would be subject to three years of “rehabilitation and reeducation,” during which time he will be in police custody.

Fourteen is the minimum age of criminal responsibility in China meaning the boy cannot be charged with a crime.

In a similar high-profile case in December last year, a 12-year-old boy who had been detained for killing his mother was released by police in Central China’s Hunan province, because prosecutors were unable to charge him with a crime.

Pi Yijun, a specialist in juvenile delinquency at the China University of Political Science and Law, described to Caixin at the time three kinds of punishment for minors who’ve committed a crime, and why none of them had been implemented in the Hunan case.

The first — being sent to a juvenile detention facility — was not available as the boy hadn’t been formally charged. He couldn’t be sent to a reform school as his actions were too serious, and these institutions only accept underage students who’ve committed minor infractions.

Pi said there were “few institutional provisions” for the third kind, known as “reeducation through custody” — which is what has apparently been applied to the Dalian boy in the recent case.

This option is now vaguely defined and exists “in name only” in many localities, as it used to be carried out in concert with the now-abolished reeducation through labor system, Tian Xiangsia, vice secretary of the Shanghai Youth Crime Prevention Research Association, told Caixin last year.

Unrelated to the recent case in Dalian, draft amendments to China’s laws on the protection of minors and on the prevention of juvenile delinquency were reviewed on Saturday at the bimonthly session of the National People's Congress (NPC) Standing Committee, the country's top legislative body.

At that session, NPC deputy Fu Yuqiang said the age of criminal responsibility should be lowered to 12, state-run broadcaster China Radio International reported (link in Chinese).

“The act of ‘releasing the tiger back into the mountains’ is unfair to victims and their families,” said Fu.

However Yuan Ningning, an expert on minor law at the China University of Political Science and Law who has been involved in drafting the amendments, told Caixin that lowering the age of criminal responsibility was not a good long-term solution, because incarceration can cause psychological trauma and lead to minors developing antisocial personalities.

In addition, laws which apply to everyone should not be impulsively revised based on individual cases, Yuan said.

Other lawmakers voiced concern about proposed amendments which would remove the option of “reeducation through custody.”

A previous version of the story incorrectly described the boy's punishment. He will be subject to three years of “rehabilitation and reeducation,” during which time he will be in police custody.