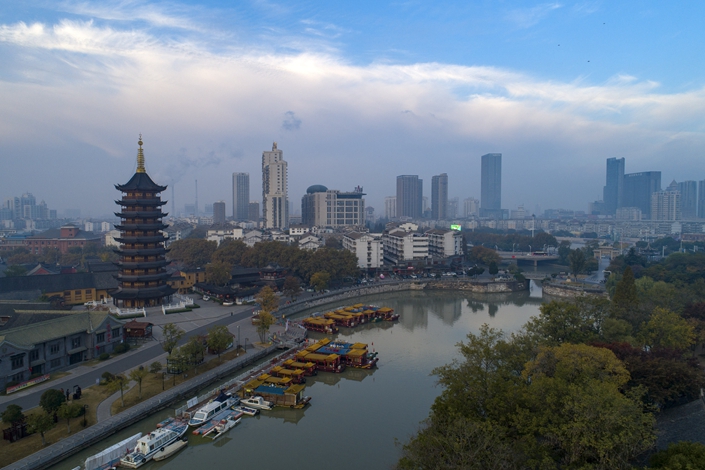 The Yangtze River Delta and Fenwei Plain regions should improve their air quality readings by 2% and 3% respectively for the coming autumn and winter seasons, according to action plans released by the Ministry of Ecology and Environment on Tuesday.

The two regions have been tasked with lowering their average daily concentrations of PM2.5, particulate matter with diameter of 2.5 micrometers or less that can cause a litany of health complaints. The autumn and winter period, which runs from Oct. 1 to March 31, 2020, typically sees elevated levels of pollution due to high heating demand and industrial activity.

The Yangtze River Delta includes East China cities such as Shanghai, Wuxi, and Hangzhou, and the Fenwei Plain encompasses an area of about 150,000 square kilometers (58,000 square miles) across the northern provinces of Shanxi, Shaanxi and Henan. The two areas have gotten off easy this year compared with pollution reduction targets for a 28-city region of northern China that includes Beijing, Tianjin, Hebei province and surrounding areas. That region must decrease its average PM2.5 concentration by 4% this autumn and winter season.

The average daily PM2.5 concentration in the Yangtze River Delta decreased 2.5% from January to September this year, down to 39 micrograms per cubic meter. However, PM2.5 concentrations in autumn and winter can be 1.8 times that of other seasons — during this period last year, 10 cities in the region failed to hit their pollution reduction targets, with five cities’ PM2.5 averages increasing from the previous year. In the Fenwei Plain, China’s coal and coking heartland, the average autumn and winter PM2.5 concentration is about twice that of other seasons.

The action plan for the Fenwei Plain involves targeted measures to promote upgrading of infrastructure in the coking and coal industries to be more environmentally-friendly, concentrate resources to promote coal treatment, and finish building infrastructure to switch nearly 2 million households from burning dirty coal to cleaner heating sources.

The region is also set to accelerate a transition from relying on roads for coal transportation to using rail, which has a lower environmental impact. Shanxi province in particular will focus on connecting key coal mining enterprises to railway lines.

The plan also calls to reduce pollution by adjusting and optimizing industry, energy, transportation and land use. The region must continue to implement ultra-low emissions technologies in the iron and steel industries and strictly control consumption of coal, one of the largest contributors to particulate matter pollution.

Both action plans call to control emissions of volatile organic compounds (VOCs) by formulating plans for enterprises with high VOC emissions, promoting the use of products with low VOC content, and using low VOC emission products in municipal engineering projects.