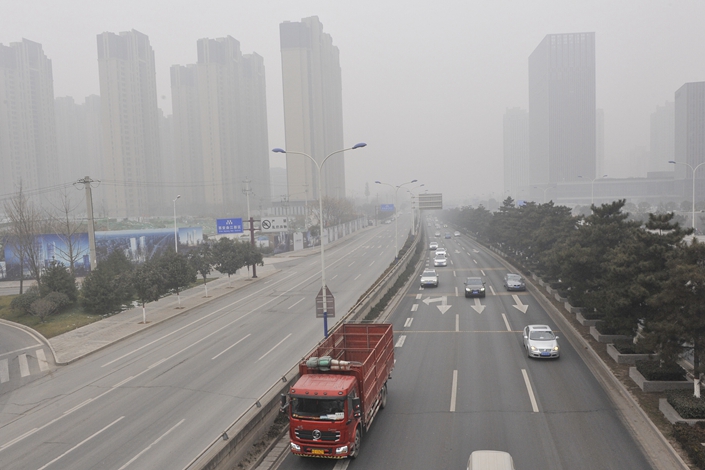 Key cities in northern China have set a 4% reduction target for fine particulate air pollution during this year’s fall and winter season, according to an action plan released by the Ministry of Environment and Ecology (MEE) this week.

The plan, which applies to Beijing, Tianjin, and 26 cities in Hebei, Henan, Shanxi, and Shandong provinces for the period from October to March, crystalizes measures foreshadowed in August guidance which emphasized it would not pursue a “one-size-fits-all approach.”

The plan targets PM2.5, or particulate matter with a diameter of 2.5 micrometers or less. Such particles, which can enter the bloodstream and internal organs after they are inhaled, cause both acute and long-term damage to human health.

This year’s action plan sets pollution control requirements for industry, energy, and transportation, and includes “emergency management” measures to cope with severe pollution. The ministry will sort companies into three classes depending on how much they pollute and manage them accordingly, the Wednesday announcement said.

Enterprises that fail to meet emissions requirements, cannot control their emissions or fail to complete air pollution prevention measures on time will not be included in the classification system and will be subjected to the strictest production limits.

The plan also requires Hebei, Shanxi, and Shandong to cut capacity in the steel, cement, iron, and coking industries, which are known for high emissions.

The 4% target would aim to cut the winter average to about 77 micrograms per cubic meter from last winter’s 82 micrograms — a relatively high base compared to the winter of 2017-2018, when the average was 78 micrograms.

China carried out a sweeping anti-pollution campaign in the winters of 2013 to 2017, during which local officials frequently ordered factories and even stores to shut down abruptly, disrupting local industry and daily life. The winter of 2017 to 2018 saw a significant drop in the concentration of PM2.5 pollutant particles, thanks to favorable weather patterns and blanket production curbs, but public anger over the curbs also grew.

However last year, the region missed its target of a 3% decrease. Between October 2018 and the end of March, the average PM2.5 concentration had increased 6.5% from a year before to 82 micrograms per cubic meter.

The Chinese government’s general target for PM2.5 pollution is a maximum annual average of 35 micrograms per cubic meter, three-and-a-half times higher than the World Health Organization’s safe level of 10 micrograms.

In September, MEE spokesperson Liu Youbin told reporters that cities that met their air pollution targets during the fall and winter period last year would be exempted from air quality improvement targets.

An official from MEE who was not identified in the official press release apparently told reporters on Oct. 17 that this year’s plan, the third action plan released by the ministry, is “firmly opposed” to the “one-size-fits-all” measures taken in previous years that required all high-emissions industries to shut down once they had reached a production quota.

In February, a comprehensive global review of the impact of air pollution on human health concluded that it damages most, if not all organs in the human body. Fine and ultrafine air pollution brings airborne poisons into direct contact with internal organs via the bloodstream, and can trigger inflammation responses when the body tries to fight the particles as though they are foreign bacteria or viruses.

The most damaging pollution appears to come from coal burning, the authors of the review concluded, finding so-called “toxic hitchhikers” — elements like arsenic, lead and cadmium, as well as compounds like sulfuric acid — can be picked up during the combustion process and be carried deep into the human lung on the surface of the particulate matter.