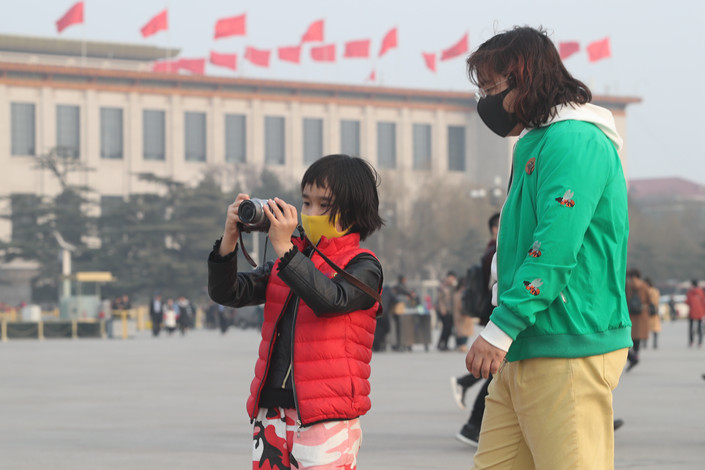 Visitors to Tiananmen Square in Beijing wear masks to protect themselves from air pollution on March 2. Photo: IC Photo

Three professors affiliated with Beijing Normal University calculated that if the average concentration of fine particulate matter in the air in 28 cities dropped to China’s national target, it would save the economy 16.46 billion yuan ($2.4 billion) per year.

The Chinese government’s target for fine particulate matter (PM2.5), which has a diameter of 2.5 micrometers or smaller, is a maximum annual average of 35 micrograms per cubic meter, three-and-a-half times higher than the World Health Organization’s safe level of 10 micrograms.

Focusing on Beijing, Tianjin and 26 cities in nearby Hebei, Shanxi, Shandong, and Henan provinces, researchers Yang Siyuan, Fang Delin and Chen Bin added the economic loss from death and disease caused by exposure to high PM2.5 concentrations. Seizing on the fact pollution varies by season depending on demand for heating — which is often produced by burning polluting coal — the authors compared the winter and summer periods from December 2013 to August 2016.

Overall they found the number of cases of PM2.5-related death and disease during the winter season was about three times higher than that of the summer. Beijing, Tianjin, and the Hebei cities of Baoding, Shijiazhuang and Handan reported the highest rates, while cities in Shanxi seemed relatively less affected.

Analyzing income levels, the cost of medical treatment and other factors, the researchers created a formula to calculate the economic impact on people affected by air pollution exposure. Per capita, this “welfare loss” declined in Beijing and Tianjin for the period studied, but climbed in the other cities. Rural families experienced a particularly pronounced welfare loss of between 13% and 48% more than their urban counterparts.

In February, a comprehensive global review of the impact of air pollution on human health concluded that it damages most, if not all organs in the body. Fine and ultrafine air pollution brings airborne poisons into direct contact with internal organs via the bloodstream, and can trigger inflammation responses when the body tries to fight the particles as though they are foreign bacteria or viruses.

The most damaging pollution appears to come from coal burning, the authors of the review concluded, finding so-called “toxic hitchhikers” — elements like arsenic, lead and cadmium, as well as compounds like sulfuric acid — can be picked up during the combustion process and be carried deep into the human lung on the surface of the particulate matter. “This scenario is most relevant to particles resulting from fossil fuel combustion, especially coal combustion, which contains many heavy metal constituents and high levels of sulfur.”

A study published in September estimated air pollution killed nearly 9 million people around the world in 2015 — even more than cigarette smoking. That was more than double previous estimates.

Airborne fine particulate matter was one of the prime targets of the “war on pollution” China declared in 2014. Major sources of PM2.5 are burning coal, emissions from heavy industry, and emissions from cars and trucks. Various initiatives have been launched in the 28 cities across six provinces around Beijing — labeled by the government as “the 26+2” — to cut back on emissions, such as production caps and a broad-reaching project to switch rural residents from burning coal to using gas for heating.

These seemed to be effective initially, with pollution levels dropping 11.8% year-on-year in 2018, though analysts from the environmental nongovernmental organization Greenpeace told Caixin good weather could have accounted for as much as half of that improvement.

That was before trade tensions rattled the Chinese economy, which prompted a relaxing of pollution controls in order to stimulate growth. China’s Ministry of Environment and Ecology revealed this month that the average PM2.5 concentration for January-April in the “26+2” cities had gone up 8% year on year. According to Greenpeace, coal consumption increased 13% in the six provinces between October and March from the previous period.

Ning Leng, a China Public Policy Postdoctoral Fellow at Harvard University’s Ash Center, previously told Caixin that the change reflects China’s economic circumstances. “Usually, emissions decrease, rather than increase, in an economic downturn. Here we see the opposite,” she said in December. “This shows an active and strong role of the Chinese state in pushing the economy up by all means.”