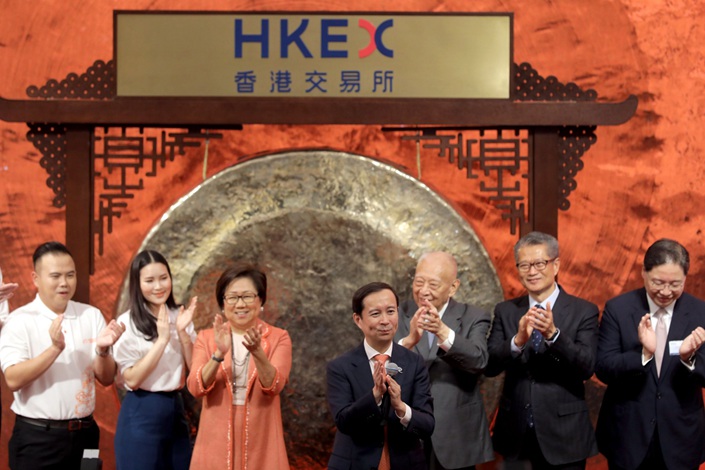 Alibaba Group Holding Ltd. closed up 6.6% in its Hong Kong debut, signaling strong investor interest for the Chinese e-commerce giant, as well as providing a boost for the Asian city that has been plagued with anti-government protests for months.

Chairman Daniel Zhang, lieutenants wearing Alibaba lapel pins and Hong Kong dignitaries were on hand to strike the opening gong Tuesday at a celebration of the city’s biggest stock listing this year. The company presented a Chinese-style painting to the exchange — a souvenir to go with the showy coming-out party.

Asia’s most valuable corporation raised about $11 billion in the financial hub’s largest issuance of stock since 2010, a triumph for a stock exchange that lost many of China’s brightest technology stars to U.S. rivals. The blockbuster debut by one of China’s most successful companies signals confidence in Hong Kong’s future even as pro-democracy protests rock the city, earning Alibaba goodwill in Beijing.

It’s also a homecoming of sorts for Alibaba, whose decision to hold its $25 billion initial public offering five years ago in New York dealt a blow to Hong Kong’s ambitions. Listing closer to home has been a long-time dream of billionaire co-founder Jack Ma’s. “We came home. We came back to list in Hong Kong,” Zhang said to applause. “It helped make up for our regret five years ago.’’

Its homecoming came amid growing China-U.S. tensions as the two countries clash over everything from trade and technology to investment. Investors on the Chinese mainland can currently access shares of some Hong Kong-listed Chinese companies under a stock connect program between the Shanghai and Hong Kong stock exchanges launched in 2014. But the current program only applies to companies that first list in Hong Kong. That means mainland investors for now can’t access shares of Alibaba, which chose the U.S. for its IPO.

Alibaba’s secondary listing will help the company better navigate the risks amid a deteriorating relationship between China and the U.S. The American government has been reportedly considering delisting Chinese companies from U.S. stock exchanges as part of a broader effort to limit U.S. investment in them.

“Now with the dual listing, Alibaba’s investors with U.S. shares can theoretically transfer them to the Hong Kong Stock Exchange,” Wu Biwei, an executive at Shenzhen-based brokerage Futu Securities, said at an industry forum Tuesday in Beijing. Wu said Alibaba’s homecoming would be a boost for other U.S.-listed Chinese tech companies opting for a similar move.

Alibaba is the third Hong Kong-listed Chinese company to take advantage of an IPO rule amendment implemented early last year that for the first time gave the green light to firms that have shares with different voting rights to list in the city.

A marquee name like Alibaba’s could draw investors and boost trading liquidity for Hong Kong Exchanges & Clearing Ltd., which just saw its biggest profit slump in more than three years following a failed bid to buy its London counterpart in September. Efforts to court Alibaba emanated from the very top, with Chief Executive Carrie Lam, Hong Kong’s leader, herself lobbying Ma. The Chinese company’s decision to forge ahead despite a recent escalation in protest-related violence pleased officials trying to persuade the world that the troubled city still has a future as a financial hub. Alibaba’s sale could tempt Chinese tech unicorns from Didi Chuxing Inc. to ByteDance Inc. to opt for Hong Kong over the U.S. if they eventually go public.

“Alibaba will be the leading light for bringing more companies in,” Andrew Sullivan, a director at Pearl Bridge Partners, told Bloomberg Television. “You may see some new money being allocated. The keen competitor is going to be Tencent, which has historically traded at a premium.”

Demand for Alibaba’s stock surpassed supply by several times and more shares were allocated to small investors. It’s a feather in the cap for Zhang, who took over as chairman from Ma in September. The former accountant is now spearheading the company’s expansion beyond Asia as well as into adjacent business lines from cloud computing to entertainment, logistics and physical retail. The stock trades under the code 9988 in Hong Kong, auspicious numbers in Chinese culture that connote prosperity.