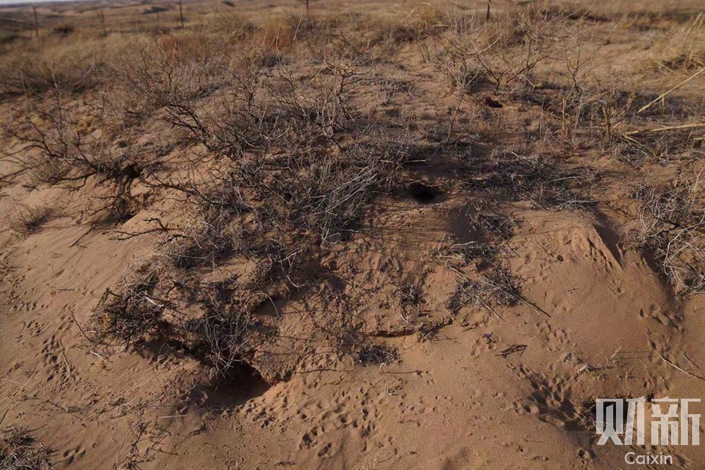 Rat holes are a common sight along a road in Inner Mongolia. Photo: Ding Gang/Caixin

Inner Mongolia authorities are scrambling to prevent the further spread of pneumonic plague, including by establishing a “firewall” for those leaving the region, after a local couple sparked a panic after being diagnosed in Beijing earlier this month, according to region’s emergency management authority.

The actions follow reports earlier this month of two pneumonic cases and a bubonic plague case originating in the region, and revelations that local disease control agencies and medical institutions failed to adequately respond to the public health emergency.

Documents obtained by Caixin show there were early warnings of a “fierce” plague epidemic in rodents, starting as early as in mid-August in the Sonid Left Banner region, where the couple contracted pneumoic plague.

Over a period of 11 days in August this year, 12 strains of the plague-causing Yersinia pestis bacteria were discovered in dead rodents in Sonid Left Banner. Rats and other rodents are the main carriers of the bacteria’s main vector. Legal protocols require disease control institutions to immediately report such cases to the local health department, which will then determine what action to take.

“We reported it,” a staff member of the Sonid Left Banner Center for Disease Control over the phone. When asked if the August cases were reported the same month they were detected, the staff member, who refused to give their name, hung up.

But a source with inside knowledge of the Xilingol League health department appeared to contradict that, telling Caixin that it had not received any early warnings of a plague epidemic in rodents. “Without timely notification, it’s impossible to carry out adequate prevention and control,” said the official, who requested anonymity due to the sensitivity of the situation.

Previously, a source at the Chinese Center for Disease Control and Prevention (CDC) also told Caixin the couple was transferred for specialist treatment after they were initially misdiagnosed in their home region. “We have these cases in Inner Mongolia,” said the source, who asked not to be identified for the same reason.

The two patients from the Inner Mongolia’s Xilingol League, who were diagnosed with pneumonic plague in Beijing on Nov.12, are in critical condition, according to the latest statement released by Beijing Municipal Health Commission on Nov. 21.

In the past few days, local authorities have “organized renowned medical experts, optimized the treatment plans and used both Western and traditional Chinese medicine to save their lives,” the statement said.

Meanwhile, anyone who had come into close contact with the two pneumonic plague patients in Beijing were released from medical observation on Thursday, it added.

The overall condition of the patient who was diagnosed with bubonic plague in Inner Mongolia’s Ulanqub city has been stable, the autonomous region’s health commission said Sunday, adding that anyone who had been in close contact with the patient has been released from medical observation.

Reeling from public fears of potential plague epidemic, the Inner Mongolia autonomous region’s emergency leading group on plague prevention has released a plan that includes establishing a “firewall” for those leaving the region and entering Beijing, as well as bolstering “three channels of defense” for preventing the spread of the disease — epidemic early warning systems, medical screenings and outbound traffic inspections.

In a visit to different parts of the region, Caixin reporters saw temperature scanners and checkpoints set up at airports and on roads. Vehicles transporting livestock, wildlife or wildlife products get reported to the local departments for public security, animal husbandry or forestry. Hospitals have stationed special personnel at entrances to monitor the temperature of anyone going in. A public information campaign about the infectious disease is in full swing.

People familiar with the plan told Caixin that any new cases of infection will be treated in quarantine and that the transfer of patients without permission has been prohibited. If a patient requires transfer, it will be done according to recommendations from the expert group.

As of 8 a.m. Thursday, all those who had come into close contact with the couple treated in Beijing had been released from quarantine, Caixin understands. In Xilingol League, 28 people remained under medical observation.

Back in Sonid Left Banner, Caixin saw a newly-stationed natural disaster and emergency prevention and control unit. Ground staff told Caixin that helicopters would be spraying pesticides and poison to control rats. As of 5 p.m. on Nov. 19, the rodent killing campaign involved nine helicopters, 26 planes and 37 tons of poison bait over nearly 100 square miles of grassland.

Jane Brophy, a medical sociologist at Melbourne University’s School of Government who specializes in the Chinese health system, said the way the case has been handled highlighted persistent problems such as “barriers to timely and effective treatment, which disproportionately affect those living in rural and remote settings.”

Brophy cited two other recent plague outbreaks — one in 2014 in Gansu, where three people contracted pneumonic plague and died, and another in Yunnan in 2005, where five people contracted it and two died. She said all told a similar story. “Even though this incident might be a storm in a teacup, it highlights the continuing disparity between quality of health care, facilities and access to medicines between rural or inner and urban or coastal China, and also the level of mistrust in health communications among the public,” she said.

Brophy added that when authorities revealed earlier this month the couple was being treated in Beijing’s Chaoyang Hospital, it reminded many of the “mismanagement of communication” around a SARS outbreak at the same hospital back in 2003. So it was a “perfect storm” to trigger public fears.

Residents unaware of the plague risk

Before the diagnoses earlier this month, residents of Xilingol League, which borders Hebei province, told Caixin that they were largely unaware of the plague risk there. “I was scared in the days after the news came out. If those people were infected, it’s scary,” said the owner of a lottery shop near the hospital where the patients were initially treated. “But the quarantine has been lifted. It’s all right now.”

The owner of a pharmacy near Xilingol League Hospital told Caixin it seemed like many locals had “forgotten” about plague as it had been more than a decade since the last diagnosis.

Periodic human outbreaks were common in Xilingol League in the first half of the 20th century, with peaks in 1901, 1917, 1926, 1930, and a two-year outbreak that began in 1942. But since then the number of recorded cases has dramatically declined: Only four have been recorded since 1949, with the last in 2004.

“There haven’t been health campaigns about plague prevention and control, such as (the importance of) not eating wild rabbit and other animals,” the pharmacy’s owner said.

A herdsman from Sonid Left banner told Caixin that he remembered plague cases from his childhood but knew nothing about its transmission, symptoms or effective prevention. It was only after the two cases of pneumonic plague were diagnosed that local authorities began raising awareness, he said.