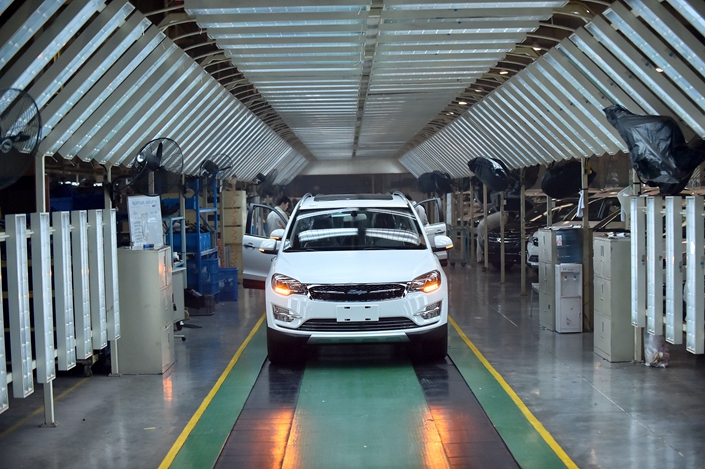 Zotye was hit by a financial crunch in 2018 and missed payments to dealers. Photo: VCG

The gate of Zotye Automobile Co. Ltd.’s plant in Yongkang, Zhejiang province, was blocked in late October by nearly 100 people demanding money. The automaker is accused of missing months of payments to dealers.

Only a couple of years ago, Zotye was a star business in Yongkang, contributing more than 1 billion yuan ($142.3 million) in tax revenue to the local government every year. In 2017, Zotye ranked eighth among China’s domestic automakers, behind the Warren Buffett-backed BYD Co. Ltd.

But the company was hit by capital crunch in 2018, separate sources close to the matter told Caixin. Zotye’s production of new-energy vehicles has been halted since October 2018, and salary payments to many of its workers were delayed this year, sources said.

People told Caixin that Zotye stopped paying dealers of its luxury brand Traum in May and its sales network has completely collapsed.

The plight of Zotye reflects the challenges facing China’s domestic automakers in a slowing market. Experts said a looming industry reshuffle will wipe out most of the small players like Zotye in the world’s largest auto market.

The good old days of freewheeling growth in China’s car business have come to an end as the economy continues cooling. The country’s auto sales have been losing steam since last year with the first annual contraction of 2.8% in nearly three decades. In the first 10 months this year, car sales dropped a further 9.7% from the same period last year.

Under downward pressure, the market is becoming increasingly divided. While global giants such as Volkswagen AG and Toyota Motor Corp. pour in more money to secure their footholds in China, many smaller domestic manufactures are slipping into difficulties and losing ground.

During the first 10 months this year, domestic auto brands accounted for 38.9% of China’s total passenger car sales, down 3.1 percentage points from the same time last year and down from 43.9% in 2017, according to the China Passenger Car Association (CPCA). Sales of domestic brands dropped 17.5% to 6.7 million vehicles.

China’s homegrown auto brands enjoyed rapid expansion between 2015 and 2017 thanks to strong domestic demand and supportive government policies such as purchase tax cuts. But growth hit a wall in 2018.

Sales of several Chinese automakers have fallen off a cliff this year. In the first 10 months, Zotye’s sales plunged 30% to 147,000 vehicles. Chongqing-based automobile and motorcycle manufacturer Lifan Industry Group Co. Ltd. sold 452 cars in October, forcing the company to halt part of its production. Other homegrown brands including Horki, owned by Dongfeng Yueda Kia Motors Co. Ltd. and Luxgen Motor Co. Ltd., as well as Enranger of Weichai Holding Group Co. Ltd., reported less than 1,000 sales this year through October.

“It’s like after so many years of effort, we are back to the starting point,” said one domestic automaker executive. “It is horrible.”

The outlook may grow even dimmer. As China moves to fully open its auto sector by allowing foreign companies to take complete control of local ventures by 2022, the country’s fledgling domestic brands will face greater threats from stronger global rivals, analysts said.

“The competition will be brutal,” said an auto company source.

China’s auto market has become increasingly concentrated as the 10 biggest players — mostly China-foreign joint ventures — control more than 90% of the market. The concentration is likely to continue, said Shi Jianhua, deputy secretary of the China Association of Automobile Manufacturers (CAAM).

“(Small players) on the margin will be squeezed out if they can’t make it through,” Shi said.

After rounds of negotiations with outraged dealers, Zotye in early November agreed to repay half of the arrearages over the next eight months while restructuring the business of Traum, people close to the situation told Caixin. The decision indicated that Zotye would give up the Traum brand, they said.

When Zotye launched Traum in a high-profile debut in 2017, the company was at the peak of its growth along with many of its domestic peers. China’s government in late 2016 had halved the purchase tax on low-emission passenger cars to stimulate sales. The policy, which benefited most of the domestic automakers, was in effect until late 2017.

The policy-fueled growth didn’t last long. A report by McKinsey & Co. found that the stimulus policies sapped future growth in China’s auto market as they encouraged some buyers to advance their acquisition plans. Purchases affected by the policies may total 7 million vehicles, according to the report.

Meanwhile, a crackdown on financial risks tightened availability of consumer loans that served as a main financing channel for auto purchases in smaller cities, McKinsey said.

Under the direction of the Yongkang city government, four local banks in August jointly provided 3 billion yuan to support Zotye in repaying loans and resuming production. The Yongkang government will “definitely rescue” Zotye because of the size of the company, a city official said.

Another person close to the matter said Yongkang’s state-owned asset administration provided guarantees for 10% of the rescue fund offered to Zotye. A due-diligence study found that although Zotye is encountering liquidity risks, it still has abundant assets, the person said.

But whether Zotye can put its business back on track remains a question, especially at a time of a broad market slowdown. Analysts have projected continued contraction of China’s automobile market in the following year.

CAAM estimated that the country’s auto sales this year would drop 8% from last year. Lang Xuehong, deputy secretary of the China Automobile Dealers Association, said sales will decline a further 10% next year.

Analysts said an industry shakeout is approaching that will eliminate many weaker players. Data from the Ministry of Industry and Information Technology showed that China has more than 50 auto manufacturers producing 118 brands.

Many of them soon may not exist. China’s market can accommodate no more than 20 companies including foreign-funded joint ventures, said an auto industry policy expert who predicted that the number of surviving domestic automakers will be around 10.