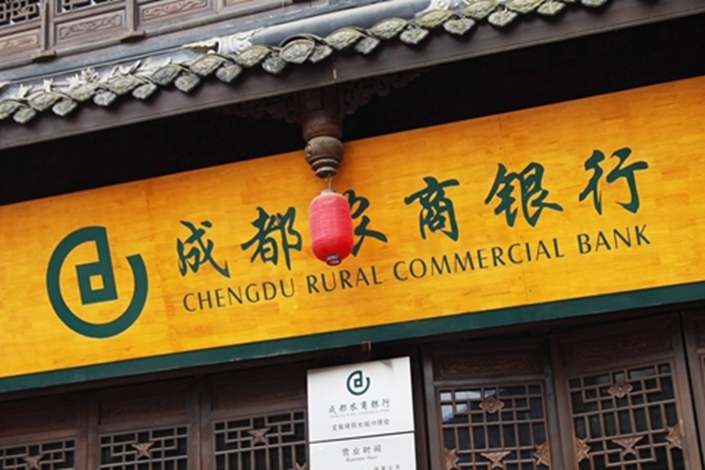 Fallen Chinese financial giant Anbang Insurance Group Co. Ltd. will probably transfer some of its shares in a bank based in the southwestern city of Chengdu to an investment firm owned by that city’s government, Caixin has learned.

Chengdu Xingcheng Investment Group Co. Ltd., an investment vehicle controlled by the city government, is expected to lead the purchase of a 35% stake in Chengdu Rural Commercial Bank Co. Ltd., according to sources familiar with the matter. The deal will likely be announced before the end of the year, they said.

The sale is part of efforts by China’s insurance regulator to dismantle Anbang. It has been systematically selling off Anbang’s assets since taking over the scandal- and debt-ridden conglomerate last February. The regulator has vowed to dispose of unnecessary financial licenses held by Anbang that don’t do much to augment the value of its core insurance business. Anbang founder Wu Xiaohui was sentenced to 18 years in prison last May for fundraising fraud and embezzlement.

A former chairman of Chengdu Rural Commercial Bank, Fu Zuoyong, was recently put under investigation and expelled from the Communist Party. The anti-corruption body of Sichuan province, where Chengdu is located, said in a statement (link in Chinese) on Saturday that he is suspected of taking bribes and other wrongdoings, but did not specifically mention his involvement with Anbang.

In December of last year, Anbang’s 3.5 billion shares in the bank were put up for sale for 16.8 billion yuan ($2.4 billion), which meant the price per share represented nearly 120% of the bank’s end-2017 net asset value per share (link in Chinese). Despite initial interest, the deal fell through and was terminated in January, likely because potential buyers led by state-owned liquor producer Wuliangye Yibin Co. Ltd. could not agree with Anbang on the price.

Chengdu Rural Commercial Bank has not yet published its 2018 annual report, but it made a net profit of 4.6 billion yuan on assets worth 705.6 billion yuan in 2017, according to that year’s annual report (link in Chinese). Extensive audits are necessary to determine how much Anbang may have embezzled from it through interbank business and other deals.