By Qin Jianhang and Mo Yelin 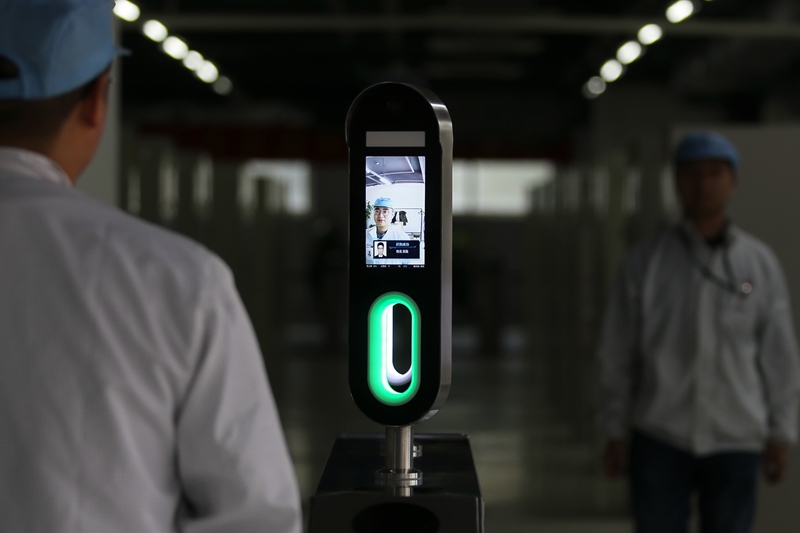 In the narrow space behind an elevator door, a worker stands on his yellow toolbox tinkering with something, tools scattered on the ground. A local resident asks what he’s up to, and he says he’s installing a new device. “It projects advertising. But inside, there’s a hidden facial recognition system.”

This scene played out in September in the Changning district of Shanghai where an untold number of such systems have been quietly rolled out. Some building managers have had the cameras installed for free in return for giving the companies that make them advertising space.

Few places in the world have embraced facial recognition technology with quite the fervency of China.

Sophisticated cameras capable of identifying, verifying and tracking people are seen everywhere from hotels and airports to train stations and shopping centers. The technology is used to access colleges, residential communities, and businesses. Since 2018, tech giants have promoted its use to let people pay for goods and services without the aid of a smartphone.

But the fast rollout of the technology and its increasing penetration into unconventional spaces is facing a growing pushback from people worried their data will be abused. It has sparked debate on limits and boundaries, and on the trade-off between safety, convenience, and data privacy.

One major fear about facial recognition systems is their secret commercial use, where they silently collect personal data without knowledge or consent. Some legal experts say the sector needs strict regulation and licensing, and that laws have failed to keep pace.

China’s surveillance network is the world’s largest, with more than 20 million cameras deployed at the end of 2017, according to the state-owned TV network CCTV. Facial recognition has long been touted as way to improve public security and, in the private sphere, to access new heights of convenience.

Internet giants Tencent and Alibaba have pioneered its use in payment systems that could one day replace the nation’s ubiquitous QR code mobile payments.

And it’s big business. The facial recognition market is expected to be worth 12 billion yuan this year, up from last year’s 10 billion yuan ($1.4 billion), according to a report from Shenzhen-based Zhongshang Industry Research Institute.

But the technology is increasingly worming its way into unexpected places. Since early last year, China has seen a series of boycotts by students and parents of its use in schools. One high-profile case concerned Maanshan No.2 High School in Maanshan, a city in East China’s Anhui province.

At the end of last year, it was revealed that surveillance equipment was to be deployed in Maanshan No. 2’s classrooms after students posted pictures of boxes of the equipment on social media. This included facial recognition cameras and electronic screens, a Caixin investigation found. A student described how cameras were to be set up to record students in class — catching them sleeping and playing on their phones, for instance — and would then display their behavior on the screen.

But the school aborted the plan after protests, Caixin has learned. Some students said they tried tampering with cameras using paper and tape.

It’s not just students: The general public’s views on these technologies appear to have shifted too. Earlier this year, what is believed to be the first major study of Chinese public opinion on the technology found almost 80% of survey respondents were worried about data leakage. The survey, published by (link in Chinese) Beijing-based Nandu Personal Information Protection Research, showed about the same number favored the option of using traditional ID methods instead of facial scans to verify their identity.

One major concern is the increasing use of hidden cameras, said He Yanzhe, a researcher at China Electronics Standardization Institute (CESI), a nonprofit institution under China’s Ministry of Industry and Information Technology. “It is really scary. It means our facial data is no longer under our own control,” he said.

Authorities’ embrace of facial recognition technology can lead to the inappropriate deployment of such hidden cameras. A Caixin investigation found that the secret elevator cameras deployed in residential communities in Changning, Shanghai were part of an ongoing “smart city” project initiated by the municipal government.

A local government official, who was granted anonymity given the sensitivity of the issue, told Caixin that facial recognition cameras would eventually be deployed in all the elevators in Shanghai.

They’re also hidden in shopping malls, according to a surveillance camera dealer who asked not to be identified. Such facial-recognition powered cameras are typical placed at a mall’s front gate, and used to track customers entering or existing the building, and that the data could use used to analyze their shopping habits.

Anyone can purchase such cameras, and their use is not regulated by a specific Chinese law, the dealer said.

Another issue regarding the facial recognition is that the technology is increasingly imposed on the public without alternative options. This was well illustrated in the high-profile case last month of a professor who sued a zoo in Hangzhou, East China Zhejiang province, which had forced visitors submit to face scans in order to enter.

Guo Bing, a law professor at Zhejiang Sci-Tech University, took the zoo to court alleging it had violated Chinese consumer rights law by failing to gain his permission before gathering his personal information.

More than just a face

Fears about facial recognition and personal data leakage have been fueled by cases of facial data being bought and sold online.

In September, the Beijing Youth Daily exposed a website where up to 2,000 people’s facial data was being sold. That included around 50 to 100 pictures of each individual, which were marked with additional information such as their gender and emotional state. Two people affected told the newspaper they had no idea their data was being sold.

The unknown risks involving facial recognition become more pronounced when taking into account its potential to be packaged with other types of personal data, such as healthcare information, which consumers have ceded over through their use of certain mobile apps and websites, legal experts told Caixin.

Powered by the machine learning algorithms, a camera will be able not just identify people, but to judge them, according to CESI’s He Yanzhe. They may be able to tell whether someone is sick. This is more than just a privacy issue, but rather an issue of people being monitored, he said. “For any one being caught with a camera, there will be a psychological burden and a sense of fear.”

Other experts say the blind promotion of facial recognition technology could drive social discrimination. When cameras are made to make judgments, the consequences could be unimaginable if mistakes are made, said Duan Weiwen, a researcher at Chinese Academy of Social Sciences.

Wang Xixin, a law professor at Peking University, pointed to a facial recognition security check plan currently under consideration by Beijing’s municipal transport department. This would establish a database that groups public transport users into different categories. Based on that database, those deemed dangerous would be flagged to security officers for special checks.

This so-called “categorized security check system” is touted as being more efficient, but it could raise the chance of discrimination, said Wang.

Current regulations that apply to cases of collection and utilization of facial data are largely based on other existing laws such as those related to consumer rights and general personal data protection guidelines. There are no Chinese laws that specifically address the scope of facial data, revealing a big gap between regulation and industry’s fast development.

The Chinese Academy of Social Sciences’ Duan suggested that China should designate facial recognition as a technology that requires strong regulation. “To put it simply, a camera should only be allowed to be deployed with permission, and according to law,” he said.