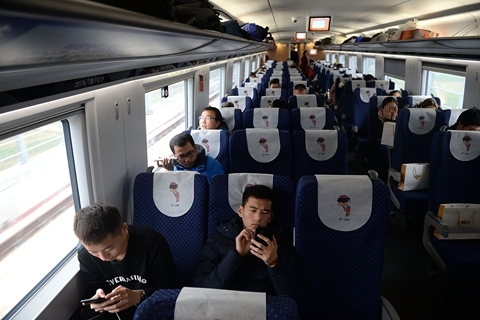 Trains running on the Guangzhou-Shenzhen-Hong Kong Express Rail Link, a line that stretches 141 kilometers and serves seven stations, are able to provide superfast 5G mobile service even when they go through tunnels or stop at railway stations, state broadcaster CCTV reported Saturday.

“I just used the 5G network to watch a video and there was no buffering,” a passenger told CCTV at the Shenzhen North Railway Station.

More than 300 5G base stations are set to be built along the rail line, the report said.

China is accelerating the nationwide rollout of 5G networks, which should be able to improve industrial uses of the internet and enable autonomous driving. By the end of November, the country had set up some 113,000 5G base stations.