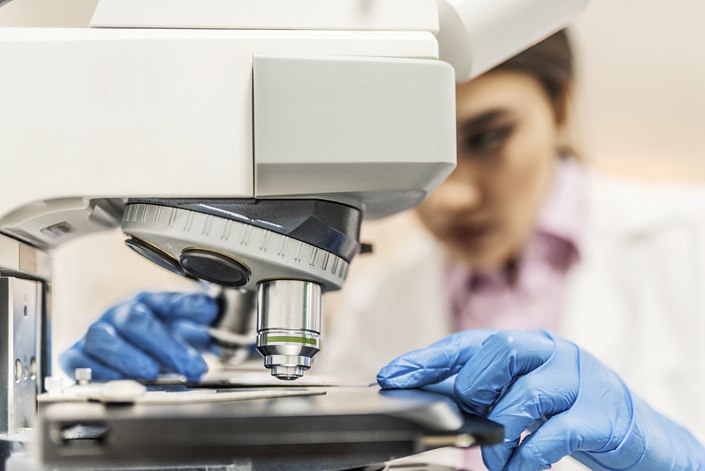 Speaking to Caixin journalists Tuesday, Shi Zhengli dismissed such claims as the work of “conspiracy theorists who don’t believe in science.” Photo:VCG

The deputy director of a high-security virology laboratory in the stricken city of Wuhan has again trashed unsubstantiated claims of a link between the facility and the coronavirus outbreak that has killed hundreds across the country.

As researchers around the world rush to publish their findings on the previously unknown pneumonia-causing virus, some social media users have claimed with little evidence that the epidemic has ties to the Wuhan Institute of Virology, which according to public records houses China’s only “P4” laboratory. P4 facilities operate at the highest biosafety level and commonly work with pathogens that are easily transmissible, cause severe or fatal illnesses, and often have no known vaccines or treatments.

Some internet users have postulated that the new coronavirus leaked from the institute and infected people in Wuhan, killing hundreds of people in the 18 million-strong city. Others have gone further, claiming that the virus itself is a manmade biological weapon.

Speaking to Caixin journalists Tuesday, Shi Zhengli, who is second-in-command at the institute’s P4 lab and also heads its P3 lab, dismissed those claims as the work of “conspiracy theorists who don’t believe in science.”

“I hope the investigation by the country’s specialist departments can clear this up for us,” said Shi, who specializes in the origins of emerging and severe illnesses, and helped trace the source of the deadly SARS virus. “My own words aren’t convincing enough. I can’t control what other people think and say.”

Officials believe the true source of the virus may be Wuhan’s South China Seafood Market, where many animal varieties were sold. Scientists hypothesize that the virus may be borne by bats, which can then pass on the pathogen to humans, perhaps via an intermediate organism like snakes.

In 2017, a team of researchers including Shi confirmed that the virus that causes severe acute respiratory syndrome (SARS), which infected thousands across Hong Kong and southern China in 2002 and 2003 and killed 774 people worldwide, originated in bats.

On Jan. 23, her team published some initial findings on the new coronavirus on BioRxiv, a free online repository of preliminary science papers used by biologists to rapidly share information and avoid the often-cumbersome peer review process during times of crisis. The research concluded that the new coronavirus’s genetic makeup bears a nearly 80% resemblance to the SARS virus and a 96% resemblance to a virus called “RaTG13” collected from horseshoe bats, indicating that the winged mammals may also be the natural source of the pathogen.

Multiple other experts told Caixin it was extremely unlikely that the virus was manmade.

“There is no evidence for genetic engineering of the virus,” Trevor Bedford, an infectious disease expert at the U.S.-based nonprofit Fred Hutchinson Cancer Research Center, told Caixin. “Gene editing would swap in large pieces of genetic material. We don’t see this. Instead, the changes that exist are small scattered changes consistent with evolution.”

Richard E. Ebright, a molecular biologist and laboratory director of Rutgers University’s Waksman Institute of Microbiology, echoed Bedford’s comments, saying there was “no basis to suspect the virus was engineered.”

Ebright cited the example of the SARS coronavirus, which first entered the human population as a natural incident in 2002, before spiking for a second, third, and fourth time in 2003 as a result of laboratory accidents.

“The novel 2019 coronavirus is nature punishing the human race for keeping uncivilized living habits. I, Shi Zhengli, swear on my life that it has nothing to do with our laboratory,” she wrote. “I advise those who believe and spread rumors from harmful media sources, as well as those who believe the unreliable so-called academic analysis of Indian scholars, to shut their stinking mouths.”

Shi was referring to a widely discredited paper published last week on BioRxiv by a group of India-based scientists who claimed some genetic sequences of the new coronavirus bore an “uncanny similarity” to those in HIV, a conclusion subsequently used in a widely shared social media post to claim that the virus was “designed.”

As of 10 a.m. Friday, 31,211 people were confirmed to have been infected by the new coronavirus across the Greater China region, of whom 637 had died. A total of 266 cases have been confirmed overseas, with one death.