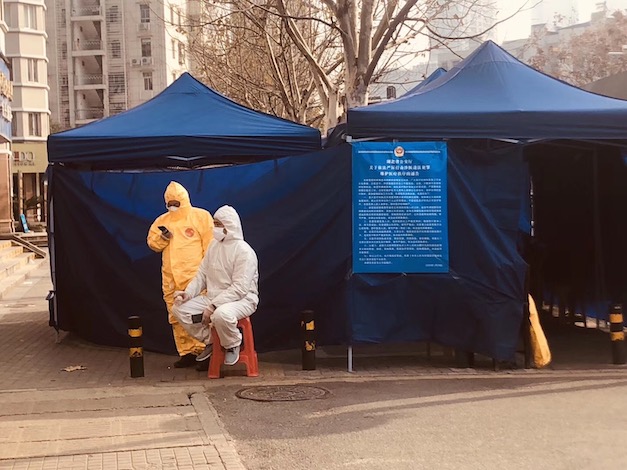 On Feb. 10, Hubei required all residential communities to strictly manage their entrances by registering all visitors and allowing entry only after body temperature tests.

The Zhangwan district in Shiyan city enacted wartime controls starting Wednesday by closing all buildings. Residents will not be allowed to leave their homes except those who work in epidemic control or basic livelihood services. Daily necessities will be supplied to buildings at fixed times and fixed prices, according to a statement from the district government.

It was the first wartime control order issued in China since the outbreak of the new coronavirus, known as Covid-19. As of Thursday morning, the deadly virus had killed 1,368 people and infected more than 50,000 in China.

On Thursday, a top leadership meeting chaired by Premier Li Keqiang required the cities of Xiaogan and Huanggang to apply equivalent quarantine and medical rescue measures as those applied in Wuhan, where the virus first broke out and has hit hardest. Wuhan and the whole of Hubei province must implement stricter controls on transport to curb the virus’s spread, the leadership group said.

Zhangwan, a district with more than 410,000 people, is the second-worst-hit area in Shiyan city. The district reported 137 confirmed cases as of Wednesday. Shiyan, with 562 confirmed cases, ranks 11th among Hubei cities.

Under the Zhangwan district order, people who force their way into or out of closed areas will be detained, according to the government’s statement. The special control measures are to last at least 14 days but may be lifted earlier or extended, depending on the virus situation, the government said.

On Thursday morning, Hubei, the epicenter of the coronavirus outbreak, reported nearly 15,000 new cases in one day as health authorities revised diagnosis standards by allowing for the use of CT scans in addition to nucleic acid tests.

The spike in the number of new cases fueled concerns that controlling the epidemic, especially in the worst-hit region, still faces significant challenges despite a recent decline in the growth of new cases outside Hubei.

Before the release of the latest data, the World Health Organization said Wednesday that the number of cases of infection in China had stabilized but that it was too early to say the epidemic was slowing.

On Feb. 10, Hubei required all residential communities to strictly manage their entrances by registering all visitors and allowing entry only after body temperature tests.