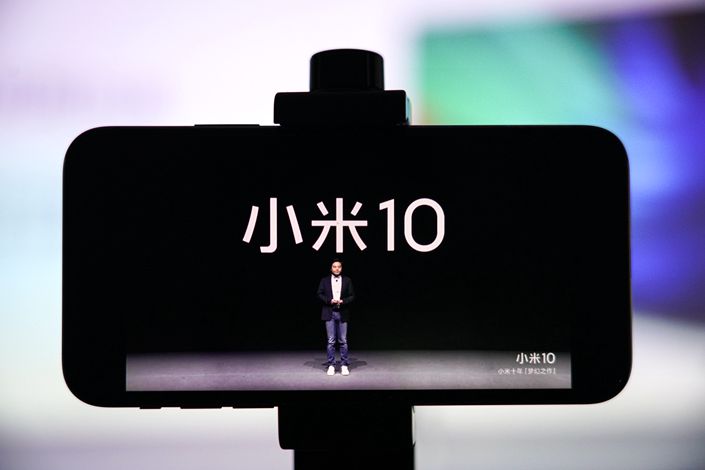 Xiaomi Inc. is pushing the envelope with the launch of a new series of smartphones with some of its highest prices ever, aiming to move further into the higher-margin premium market dominated by Apple and Samsung.

CEO Lei Jun launched the company’s Mi 10 series through a livestreaming event on Thursday, eschewing the usual live audience debut as China frowns on such gatherings during the coronavirus outbreak. Touted by the company as its “official foray” into the premium smartphone market, Mi 10 series phones will start at 3,999 yuan ($573), and sell for as much as 5,999 yuan.

The new phones support 5G wireless technology; have a 6.67-inch AMOLED display, and are equipped with the Qualcomm Snapdragon 865 chipset.

Mi 10 models start at a full 1,000 yuan more than Xiaomi’s last premium series, the Mi 9 — which started at 2,999 yuan at their launch a year ago. That same year in January, Xiaomi said it would spin off its low-cost Redmi brand as part of an effort to shed its image as a low-end smartphone maker.

While Xiaomi wants people to think of its phones as high-tech and cutting-edge, the vast majority of its sales came from low-end models at the time of its IPO in 2018. Such phones have helped make Xiaomi a favorite in developing markets like India, but are also famous for their thin profit margins due to stiff competition.

The phones are generally as good as, if not better, than comparable rival products, said Jia Mo, an analyst at consultancy Canalys. “They could be attractive to those who are now considering buying a 5G handset,” he said. However, Xiaomi’s reputation as a budget phone-maker means it’s not clear if consumers would be willing to pay such a high price, Jia added.

The company could also face difficulties delivering the new phones due to disruptions created by the ongoing coronavirus outbreak. Lei said on Thursday that supply could be “tight” for next week or two due to such disruptions.

Xiaomi’s push into the higher-end comes as sales are falling in its important home market. Last year the company’s China shipments fell 21% to just 38.8 million units, giving it market share of 12.4%, according to Canalys. That contrasted with strong growth for Huawei, whose China shipments surged 35% to 142 million units, giving it 26.5% market share.

Its woes at home caused Xiaomi’s stock to sink to an all-time low late last year, as investors worried about the loss of share in its most important market. But the stock has bounced back by more than 50% from its low point last November, as investors gain more confidence in its global strategy.