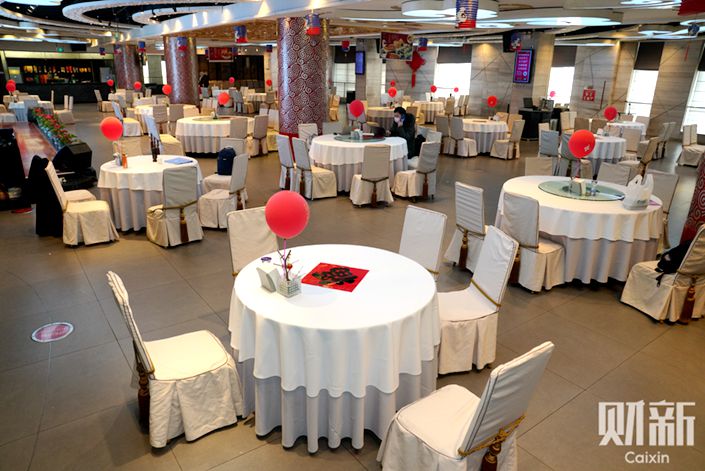 It will likely take two to three months for the sector to return to pre-outbreak normality, the China Cuisine Association estimated. Photo: Cai Yingli/Caixin

Around 95% of caterers experienced major losses over the Lunar New Year, according to an industry association survey, with the ongoing coronavirus outbreak spoiling what would normally be an annual high point for the sector.

The report released by the China Cuisine Association said the impact of the coronavirus outbreak on China’s restaurants, fast-food joints and snack stands will be several times greater than that caused by the SARS outbreak of 2002 and 2003. Besides losses over the holiday, businesses are likely to face serious cash flow issues and difficulty obtaining financing in the coming months.

About 78% of the businesses surveyed said the size of their operating losses over the Lunar New Year exceeded their revenue during last year’s holiday. Around 9% said their loss was equivalent to over 90% of the 2018 revenue figure, while 7% reported losses of between 70% to 90%, and 5% said their losses were below 70%. The report didn’t specify if any businesses among that 5% avoided losses.

While payroll costs made up an average of 60% of expenses for the period, losses were also caused by the fact that caterers buy extra stock in the run up to the busy season, much of which has gone to waste, the report said.

The Lunar New Year is normally a high point for the country’s catering industry, with the sector taking in 724.4 billion yuan ($103.6 billion) out of 4.6 trillion yuan of its annual revenue over the holiday, according to National Bureau of Statistics data.

The association’s report said that 93% of restaurants have closed at least some of their locations amid the outbreak, which has generated massive economic disruption, with many Chinese people simply staying at home if possible. Although 23% of catering businesses have continued to provide delivery services, that has done little to offset their losses, the report said.

It will likely take two to three months for the sector to return to pre-outbreak normality, the report estimated. The China Cuisine Association has called for (link in Chinese) greater support to the industry, including via state subsidies, waiving rents, and more loans from banks.