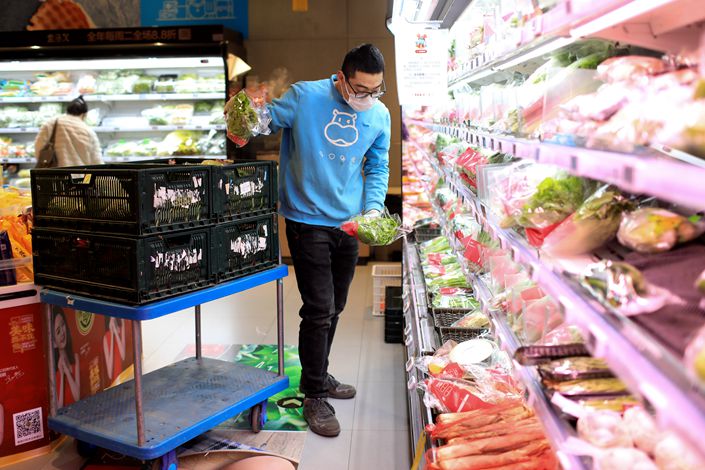 A worker restocks the produce shelves at a supermarket in Beijing on Feb. 10. Photo: IC Photo

The impact of the coronavirus on China’s services economy has been huge, but it hasn’t been evenly spread.

As consumers dine at home, by choice or not, the country’s restaurants are struggling while grocers are finding themselves short of staff in the face of a spike in demand. Some companies have decided to team up to tackle this issue, with out-of-work catering staff being reallocated to supermarkets.

After e-commerce giant Alibaba Group Holding Ltd. struck the first such partnership, retailers including Walmart Inc. and the Beijing-based Wumart Stores Inc. have followed suit. According to Caixin’s calculations, nearly 10,000 employees from a dozens of catering companies have been temporarily transferred this month.

Alibaba took the lead early this month, when its Hema grocery unit announced it had partnered with several restaurant chains, temporarily hiring their employees to help meet surging online grocery orders. Since then, Hema has hired over 1,500 people, including 1,000 from Xibei Group, which operates a chain of restaurants specializing in hearty northwestern Chinese cuisine. Since the coronavirus outbreak spread nationwide in January, Xibei has mostly shuttered its 400 restaurants in China, though a few are still offering takeout.

Wumart, one of China’s largest supermarket chains that purchased a majority stake in German wholesaler Metro’s Chinese operations last year, has hired nearly 2,000 restaurant workers in the capital city since Feb. 7. Under its agreement with the restaurant operators, the workers can return to the restaurants at any time, as long as they give Wumart three days’ notice, a company spokesperson told Caixin. Wumart will take responsibility if any workers are involved in work accidents, the spokesperson said.

These workers have been spread throughout the company’s nearly 600 stores in China, where they will be packing goods, collecting payments and assisting in-store customers.

As of Feb. 17, Walmart had temporarily hired about 5,000 workers from nearly 60 companies, most of which are restaurant operators.

As part of the deals it signed with companies to hire their employees, the workers’ choice to temporarily work at Walmart won’t pose any affect on their long-term relationship with their original employer, a spokesperson from Walmart told Caixin. Walmart has said all these new workers have to go through checks to make sure they aren’t returning from epidemic-stricken areas, or that they have been in contact with coronavirus patients, before starting work.