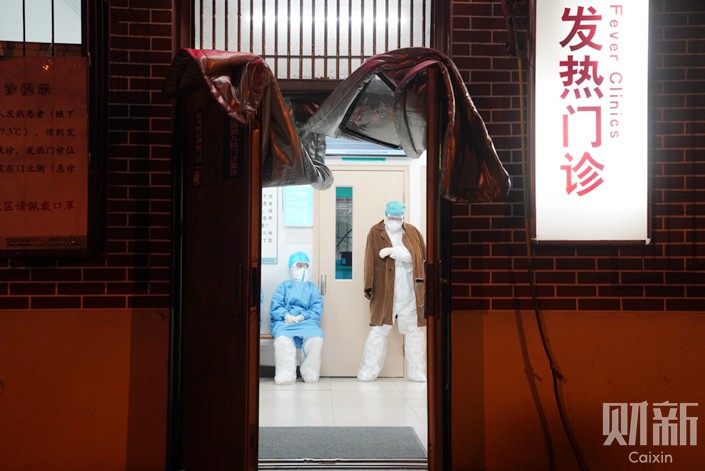 The patient, surnamed Huang, arrived in Beijing early Saturday after her release from Wuhan Women’s Prison, which has been ravaged by the ongoing Covid-19 epidemic. She has since been transferred to a district quarantine center. Photo: Cai Yingli/Caixin

Chinese authorities have launched an investigation after a former prisoner at a disease-hit prison in the locked-down city of Wuhan managed to travel to Beijing, where she tested positive for the deadly new coronavirus.

The patient, an elderly woman surnamed Huang, arrived in the Chinese capital in the early hours of Saturday following her release from Wuhan Women’s Prison, which has been ravaged by the ongoing Covid-19 epidemic. She was able to leave the central Chinese city despite showing flu-like symptoms and having to navigate stringent transportation restrictions designed to prevent the disease from spreading.

The case not only raises questions about the effectiveness of China’s citywide quarantines, but also marks the second time in a week that its opaque prison system has come under scrutiny for its handling of the epidemic. On Friday, the justice ministry announced that more than 500 Covid-19 infections had occurred among inmates and guards in several jails nationwide.

According to the Beijing Center for Disease Prevention and Control, Huang began experiencing intermittent fevers and throat discomfort on Feb. 18, one day after her release from the prison, where at least 230 Covid-19 cases have so far been confirmed. In spite of the outbreak, Huang’s family claim prison officials encouraged her to leave as soon as possible.

Although Wuhan on Jan. 23 suspended public transportation networks in a bid to curb the virus’s spread, prison officials told Caixin that police transported Huang to a highway junction outside the 11 million-strong city, where family members picked her up.

Caixin understands that both Wuhan and other quarantined cities in the surrounding province of Hubei have previously made special arrangements for freed prisoners who do not have residency in the same city. For instance, on Feb. 13 three former inmates in Wuhan were granted emergency permits to leave the city and return to their homes elsewhere, according to the People’s Court Daily, a newspaper run by the country’s highest court.

A person familiar with the matter said Huang’s family did not know she had a fever or that there had been a Covid-19 outbreak at the prison until the news was announced partway through the car journey to Beijing. They arrived in the capital at around 2 a.m. Saturday. The family claim they had their temperatures taken at the entrance to their apartment complex and were allowed inside.

However, the complex’s management denied this, saying that either the family had not undergone a temperature check on entering the compound, not all family members had been tested, or there had been a problem with the electronic thermometer.

Huang’s family reported her symptoms later on Saturday, management said. She has since been confirmed to have contracted Covid-19 and has been transferred to a district quarantine center along with her relatives, Caixin understands.

A family member who requested anonymity told Caixin that the family had acted “reasonably and lawfully” throughout the incident and had not sought to hide Huang’s symptoms from officials. “We’ve done absolutely nothing wrong,” the family member said.

A message (link in Chinese) published Wednesday on the justice ministry’s official website said that the government had launched a cross-departmental investigation into Huang’s journey from Wuhan to Beijing. The same day, Ying Yong, the recently appointed Communist Party secretary of Hubei, called for the case to be dealt with swiftly and stringently.

At a news conference Friday, Xiao Sa, the head of an office that monitors disease control work in Beijing, said “gaps existed in the entire process” of Huang’s journey into the 21 million-strong capital, according to a message published on the website of the Central Commission for Discipline Inspection, the Communist Party’s top graft-buster. The investigation is continuing, the message added.

This article was updated on Feb. 28 to include new details about Huang’s journey from Wuhan to Beijing.