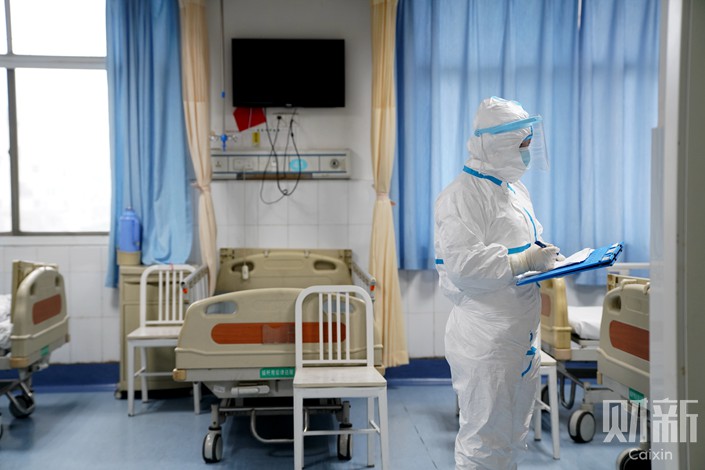 Hubei authorities have blamed hundreds of uncounted cases of Covid-19 in the province’s jails for a discrepancy in the figures they released Friday morning.

Observers were left scratching their heads after China’s National Health Commission (NHC) reported 220 more cases of Covid-19 in Thursday’s one-day total for Hubei than the province’s own authorities did.

In their regular Covid-19 updates on Friday, China’s top health body said 631 new cases of Covid-19 were found Thursday in Hubei, while the Hubei Provincial Health Commission put the figure at 411. They both reported 319 cases in Hubei’s capital of Wuhan where the outbreak was first identified.

Contacted for clarification this morning, a spokesman for the NHC said the gap was a question for provincial authorities.

In a release after lunch Friday, Hubei authorities said hundreds of cases among prison inmates were not previously counted because the prisons were not connected to the province’s infectious disease reporting system.

Hubei officials said 271 cases of Covid-19 had been identified after officials received a report from prison authorities late Thursday, and after “careful review and confirmation,” the province had added 220 cases to its tally, because 51 had been included in previous statistics. It also added 10 suspected cases, one of which is in a juvenile detention center (link in Chinese).

Of the new cases, 230 were in Wuhan Women’s Prison, while 41 were in Shayang Hanjin Prison elsewhere in the province, the nation’s top prisons official He Ping told reporters at a press briefing in Beijing this afternoon (link in Chinese). He also reported cluster outbreaks in prisons in Shandong and Zhejiang provinces.

It remains unclear how the NHC obtained the figures for its daily report while Hubei appears to have been left out of the loop.

But it’s not the first time discrepancies in China’s coronavirus figures have raised eyebrows. The NHC released a sixth round of diagnosis and testing guidelines on Wednesday. On Thursday, China reported 399 new infections in its Wednesday one-day total, down from 1,749 the day before. It was first time the figure had dropped below 1,000 in 24 days and the smallest daily increase in 27.

The previous guidelines had relaxed the diagnostic criteria for Hubei, allowing “suspected cases” to be confirmed if a chest X-ray indicated pneumonia. Under those rules, identifying a suspected case required two clinical signs — things like fever, difficulty breathing and a low lymphocyte count — down from three clinical signs. That applied whether or not the person had an epidemiological history, meaning they had been in contact with infected people, outbreak sites or wild animals.

Officials said the central government made that change to ensure patients were treated promptly and reduce the risk of people who actually had the virus being sent home to infect others.

The new guidelines released Wednesday reversed it, bringing Hubei back into line with other provinces but once again altering the formula for suspected cases. Across China, a suspected case of Covid-19 can now be diagnosed in one of two ways.

Chinese health experts were brought out this week to ease concerns about the accuracy of the main test used to confirm coronavirus cases after the director of the Chinese Academy of Medical Sciences appeared to tell state broadcaster CCTV earlier this month that they produced false negatives up to 70% of the time.

International experts too have stood by the accuracy of such tests, telling Caixin issues were more likely to be caused by under-pressure health workers taking swabs incorrectly or storing them for too long before testing them, or by unanswered questions about the virus itself.

The sixth diagnosis and treatment plan hints at this issue, saying that in order to increase the accuracy of nucleic acid detection, samples should be sent for testing as soon as possible after they are collected — including sputum from ordinary patients, and lower respiratory tract secretions from patients who were undergoing intubation.

John Nicholls, a clinical professor in pathology at the University of Hong Kong, said what’s known about the nature of the virus suggests taking samples from too high in the throat could fail to diagnose active cases of Covid-19.

“There is increasing evidence that the virus is not as abundant as influenza in the upper respiratory tract and so if a sample is taken from this area rather than lower down in the respiratory tract it will lead to a false negative,” Nicholls told Caixin.

Ian Mackay, a virologist at the University of Queensland in Brisbane, said he suspected sampling issues were responsible for the doubts raised around the use of NATs to diagnose Covid-19, saying much was still unknown about where in the body the virus that causes it appears, and when, during the course of infection. He said the tests were “very mature, reliable and well-known technology.”

“I’m still backing NATs as the most sensitive and reliable way to detect the virus when present,” he said.