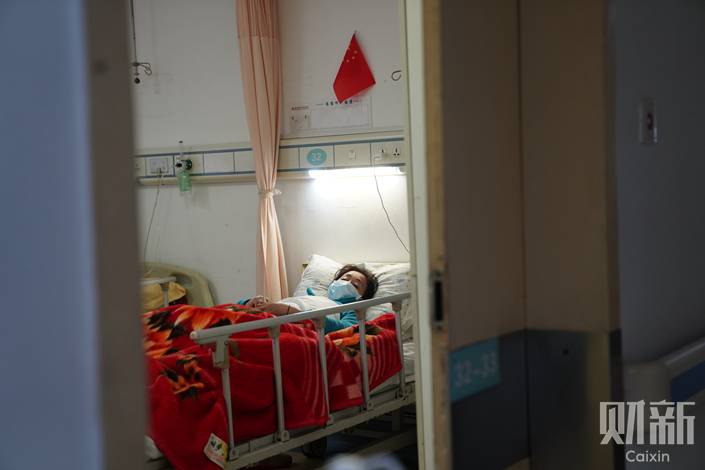 The protein sequences of the new coronavirus are anywhere from around 75% to 99% identical to the SARS virus. Photo: Ding Gang/Caixin

Scientists around the globe have been scrambling to decode the new coronavirus and figure out how exactly it infects humans in order to develop antiviral drugs or a vaccine, both urgently needed.

One of the approaches is to investigate the striking similarity between the virus that causes Covid-19, officially known as SARS-CoV-2, and its coronavirus cousin — SARS-CoV, which causes severe acute respiratory syndrome (SARS). In 2002 and 2003, an outbreak of SARS killed more than 700 people globally, most of whom lived in Hong Kong or on the Chinese mainland.

Researchers are also hoping to determine whether experimental SARS treatments that had been developed but later shelved after that outbreak was contained could also help treat Covid-19.

After Chinese scientists shared the genome of the SARS-CoV-2 virus in a global database, experts at the U.S. National Institute of Allergy and Infectious Diseases (NIAID) and the University of Texas at Austin began delving into the make-up of the new coronavirus. The result of their work was published on the journal Science’s website on Feb. 20.

They identified the structure of an important protein on the surface of SARS-CoV-2. The information will aid in the design of candidate vaccines and the development of treatments for Covid-19, the NIAID said in a press release.

Seen in a 3D map, the SARS-CoV-2 virus is spherical and has mushroom-shaped proteins called spikes protruding from its surface, giving the virus a crown-like appearance.

The spikes can rearrange themselves to bind with human cells, allowing the virus to infect them. The researchers believe infections can be prevented or slowed if this process is disrupted.

The researchers confirmed that the original spikes stabilized in their pre-fusion conformation are more likely to preserve targets for infection-blocking antibodies induced by a vaccine, the NIAID said.

The new data supports the NIAID’s approach to create a gene-based vaccine for Covid-19, which will also be useful in approaches to create other vaccines, including protein-based vaccines, as well as other nucleic acid or vector-based delivery approaches, it said.

NIAID and biotechnology company Moderna Inc., based in Cambridge, Massachusetts, are developing a messenger RNA vaccine, which directs the body’s cells to elicit an immune response.

Although the new research confirmed a structural similarity between SARS-CoV-2 and the original SARS-CoV, the paper also showed that some antibodies developed to target SARS-CoV do not bind to the new coronavirus, indicating antibodies that recognize SARS-CoV will not necessarily be effective in preventing or treating Covid-19.

Recent reports show that the two respiratory viruses bind to the same receptor on the host cell, but SARS-CoV-2 binds more easily than SARS-CoV, which could potentially explain why SARS-CoV-2 appears to spread more efficiently between humans, according to the press release.

Jason McLellan, an author of the paper and an associate professor of molecular biosciences at the University of Texas at Austin, told Caixin in an email that these 3D maps of the protein’s structure are being used by researchers around the world.

Zhou Qiang, a researcher at Westlake University in Hangzhou, East China’s Zhejiang province and his team dove deep into research on a membrane protein, called angiotensin-converting enzyme 2 (ACE2), which some suggest is the cellular receptor for the new coronavirus.

Like other coronaviruses, SARS-CoV-2 uses the receptor binding domain (RBD) of the surface spike glycoprotein (S protein) to engage ACE2, according to a paper Zhou’s team posted on Feb. 19 on bioRxiv, a website where scientists can share early research that hasn’t been peer reviewed.

The team determined “the structure of the full-length human ACE2” bound to the RBD of the SARS-CoV-2, which will be helpful for understanding how the virus attacks its target, according to Zhang Linqi, director of the Center for Global Health and Infectious Disease at Tsinghua University in Beijing.

Daniel Lucey, a senior scholar with the O’Neill Institute for National and Global Health Law at Georgetown University, told Caixin that Covid-19 might become the first pandemic coronavirus pneumonia. There are four other coronaviruses that do not cause pneumonia or lower lung infections, but rather upper respiratory infections or colds, Lucey said.

What if SARS research had not been shelved

Karla Satchell, professor of microbiology-immunology at Northwestern University in the U.S., said that the protein sequences of SARS-CoV-2 are anywhere from around 75% to 99% identical to SARS. “But even one or two or three small changes can really dramatically affect the function of a protein. More certainly can affect how well a drug or a vaccine might work,” she said.

Satchell’s work started from translating the virus’ digital model into DNA and proteins in test tubes on which experiments could be conducted. Instead of using the actual SARS-CoV-2 virus, which could put researchers at risk of exposure, the professor’s team has employed synthetic methods to produce the virus’s DNA.

After her team got a DNA sequence, she said, they put the sequence into a bacterium that can be grown in the laboratory and produce the protein. “And that process is what we’re really interested in.”

Satchell said the protein constitutes the structure of the virus and drives the virus to duplicate itself.

The professor said that although the key protein is already known, it could take six to nine months from successful testing to clinical trials to develop effective antibodies against the virus.

Satchell added that the earlier SARS research should not have been shelved. There had been potential to develop a vaccine or antiviral drugs from that work, but it never came to fruition, she said. If that research had been carried out, then it would have been easier to address Covid-19 challenges now.