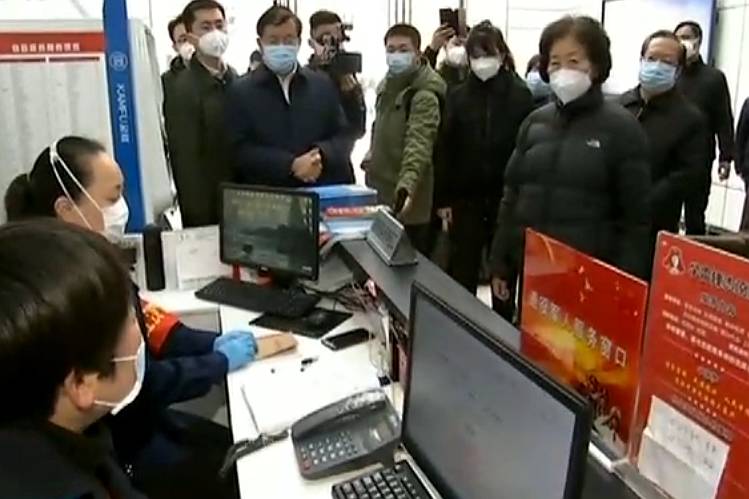 Jeers from nearby buildings that greeted a top Beijing official visiting Wuhan are shining a spotlight on the frustration that many local residents feel living under lockdown in the embattled city at the center of the Covid-19 outbreak.

The incident that made rounds on Chinese social media occurred when Vice Premier Sun Chunlan led a group of government officials to Wuhan’s Qingshan District on Thursday to survey local conditions, including how various communities were coping with the situation. All major transport links to the city have been cut since late January, and many residents are currently not allowed to leave their building compounds as part of Wuhan’s efforts to bring the outbreak under control.

In videos of the incident posted online, taken from upper floors of some of the surrounding apartment buildings, the official group can be seen walking through a tree-landscaped area to the sound of jeers coming from other buildings. One can be clearly heard yelling out, “Fake, it’s all fake!”

In typical fashion, official broadcaster CCTV covered the event in its evening news broadcast, spotlighting difficulties everyday people were facing and how Sun had urged provincial and city officials to take care of problems and not avoid difficult issues. She called on them to put an end to “formalism” and bureaucracy, and encouraged them to work in a practical way, seek the truth and sincerely work to solve problems to raise satisfaction among local citizenry.

Following that incident, some residents of the 12-building, 3,000-unit complex, called Zhongjian Kaiyuan in Chinese, told Caixin that life under lockdown wasn’t always the upbeat picture of harmony and people working together it was sometimes made out to be.

“During the outbreak, property management companies haven’t taken disinfecting work seriously. When central leaders come, (local officials) make a special effort” to show them how everyone is working for the benefit of local residents, one resident told Caixin. “But the reality is that food delivery is often inadequate. Look at how quickly they’ve worked now to put on a show.”

Wuhan has emerged as the major focus of the outbreak, as well as Central China’s Hubei province, of which Wuhan is the capital. The Covid-19 virus is believed to have first emerged in the city, possibly at a seafood market that also sold wild animals but has since been shuttered. Of the more than 80,000 cases of Covid-19 on the Chinese mainland to date, the majority have been in Hubei province, many of those in Wuhan.

While many Chinese cities have instituted restrictive measures to curb the virus’ spread, Wuhan’s are some of the strictest, with residents frequently not allowed to leave their building complexes. To meet their needs, food is often brought in from outside and other services are made available using community workers and volunteers from charitable organizations.

A resident of the complex told Caixin that people only realized a VIP was visiting when they looked outside on Thursday morning. “Ever since the outbreak began, there hasn’t been anyone on the streets,” the resident said. “But that morning suddenly there were cars being towed, and the street was being disinfected and swept. There were also guards at some of the main gates forbidding people to leave. … So we figured a leader was coming.”

A number of residents told Caixin of a wide range of problems since the outbreak began, including failure by their buildings and local authorities to make timely reports of new infections. They also complained of poor property management since their complex was sealed off, and said disinfection of elevators was inadequate. They also pointed out that 10 yuan ($1.44) food vouchers given as part of the relief effort were distributed via an online chat group for the community, even though some residents had been kicked out of the group previously.

A woman who answered the phone at the complex’s building management office said public areas were disinfected twice a day, once each morning and afternoon. When asked why some residents felt a need to personally disinfect the elevators, she said: “Disinfecting it themselves makes them feel more relaxed.”

Despite the complaints, many residents also acknowledged the work the building management was doing, and added it was inappropriate to use standards for normal times during such a stressful period. Many praised community and charity workers for performing tasks like bringing vegetables and other important daily items to their homes.