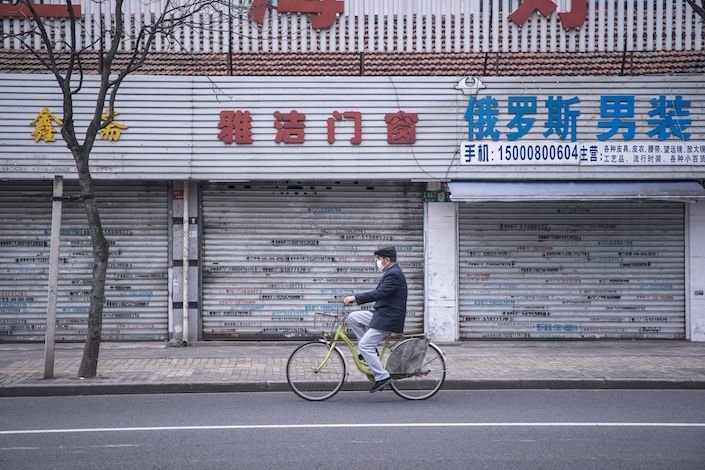 A man wearing a protective mask rides a bicycle past shuttered stores in Shanghai. Photo: Bloomberg

(Bloomberg) — The maker of the TikTok app is preparing to roll out a Google-like suite of office collaboration tools as soon as this month, according to people familiar with the plans, as it works to expand beyond short video sharing.

ByteDance Inc. became the world’s most valuable startup on the strength of its viral consumer apps like TikTok and news aggregator Toutiao, but in April last year it quietly released a remote-work app called Lark (Feishu in China) that combined elements of Slack, Dropbox, Google Docs and Skype.

Now the company is preparing to release a suite of tools marking an overhaul of its approach to work software, focusing on cloud-based file management and document and spreadsheet editing à la Google’s G Suite. The rollout will begin in China, the people said, asking not to be named because the matter is private. A ByteDance representative declined to comment.

The global market for collaborative apps grew from $14.8 billion in 2018 to $16.5 billion last year, according to IDC data. Even with strong incumbents like Microsoft Corp. and established players like Slack Technologies Inc., the sector has room for growth. ByteDance has the added incentive of a sudden spurt in demand in its home market.

The Covid-19 outbreak pushed millions of Chinese workers out of offices and into the realm of video conferencing, messaging and other online tools to keep business going. DingTalk from Alibaba Group Holding Ltd. was the most downloaded free app on China’s iOS App Store for weeks, followed closely by Tencent Conference.

Though free to use, these apps help their parent companies keep users locked within their ecosystems, which is why Tencent Holdings Ltd. is upgrading its work apps like WeChat Work in the lockdown period, helping teachers as well as workers.

ByteDance has similarly responded swiftly to soaring demand. In February, the company offered enterprise users its premium Feishu — which translates to “flying message” — free during the outbreak. That helped it record a daily peak of more than 22,000 downloads on Apple Inc.’s iOS App Store across China, according to Sensor Tower. The company also launched a standalone video conferencing app called Feishu Conference.

Feishu and Lark will continue to serve power users. The new tools will be bundled into a standalone app, one person said, and may instead appeal to casual consumers who need specific features and functions.

Though tiny compared with the leading competitors, ByteDance has been considered a threat. Tencent reacted by blocking the sharing of links to Feishu on its super-app WeChat, just as it does with ByteDance’s mini-video platform Douyin, TikTok’s Chinese twin.

A Tencent spokeswoman didn’t immediately respond to a request for comment.

ByteDance has taken a number of steps to diversify its revenue sources. It’s testing the music-streaming waters with a service called Resso in emerging markets, is getting into search and has plans to launch a big push into mobile gaming with its own development studios this year. Collaborative apps are just another avenue promising long-term growth.

“The enterprise software market in China is lagging the U.S. by at least 10 years,” said Eric Ye, co-founding partner of Eminence Ventures Ltd., a Shanghai-based investment firm focused on the industry. “It has a long way to go in terms of market acceptance and willingness to pay.”

“The Chinese giants want to do everything,” Ye said. “If they have found one area where the business model is proven, everybody wants to get in on the act, copying and competing with each other.”

ByteDance originally created Feishu-Lark as an internal tool, but the enterprise wing of its app factory is becoming instrumental to its bid to expand beyond consumer tech. The division now has a team of more than 1,700 people, led by Vice President Xie Xin, who reports directly to Chief Executive Officer Zhang Yiming, said the people familiar with its operations.

While Feishu and Lark are run by separate legal entities ― one in Beijing and the other in Singapore — and store user data separately, many staffers on Xie’s team work on both projects, they said.

So far, Lark has gained only modest traction in its biggest overseas markets including the U.S., Singapore and India. By focusing on the local China market first and targeting individual users, ByteDance will try to capture the latent demand in the country that’s been catalyzed by the coronavirus, said the people familiar with its plans. It also won’t have to compete with Google’s original G Suite, which has the advantage of incumbency and billions of accounts to advertise to.

“We expect this kind of business to be heavily loss-making in the near term,” said Ke Yan, a Singapore-based analyst with Aequitas Research. “Probably the market structure will eventually be oligopolistic and there will only be a few players left with the deep pockets for investment in infrastructure, software development and marketing.”