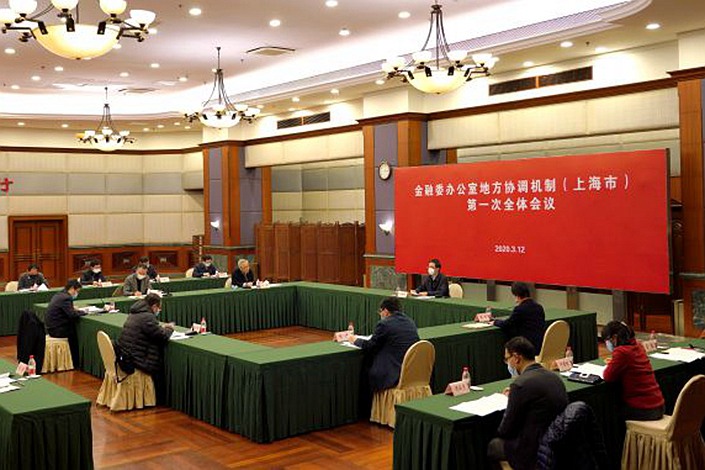 Even as China’s financial regulators focus on fighting the coronavirus and getting the country back to work, they aren’t neglecting their other responsibilities and tasks.

Despite the disruption caused by the epidemic, the general office of the Financial Stability and Development Committee (FSDC), a cabinet-level cross-agency committee that oversees the sprawling financial sector, has already set up local coordination mechanisms at eight provincial-level central bank branches, less than two months after the initiative was first announced.

The aim of the local groups is to improve coordination among local regulators as part of the government’s strategy to rein in financial risks. They are chaired by the heads of central bank branches, although they will be answerable to the FSDC’s general office.

As of Thursday, the general office of the FSDC had set up local coordination mechanisms at eight provincial-level central bank branches –– in Shanghai and the provinces of Guangdong, Jiangsu, Gansu, Sichuan, Shaanxi, Shandong and the Inner Mongolia autonomous region. The general office of the FSDC is chaired by PBOC Governor Yi Gang, while the committee itself is headed by Vice Premier Liu He.

Jin Penghui, a deputy director of the PBOC’s Shanghai headquarters and head of the PBOC’s Shanghai branch, has been named as the convener of its coordination mechanism, according to a Thursday statement (link in Chinese) from the Shanghai PBOC. Members include officials from the municipality’s finance department, and the local branches of the banking, insurance and securities watchdogs, as well as those from the local financial regulatory bureau and Shanghai’s development and reform commission.

“The local coordination mechanism of the FSDC can be understood as a limb of the FSDC at the local level, a subordinate body,” a source from a provincial-level branch of the central bank told Caixin. “The FSDC has responsibility for financial coordination, and even has the power to hold local authorities, financial institutions and relevant regulators accountable for wrongdoings or mistakes.”

The establishment of regional FSDC coordination mechanisms is a key step in the implementation of a policy laid out in the 2017 National Financial Work Conference to strengthen central and local financial collaboration. The committee is responsible for strengthening financial supervision coordination and addressing regulatory shortcomings, but it has taken time to work out how the body implements its local supervisory and accountability responsibilities.

One of the primary tasks of the new local coordinating mechanisms at the moment is epidemic control and ensuring the implementation of relevant financial policies to support enterprises as they resume work and production. Financial risk prevention and control is also a top priority with a focus on strengthening regulatory coordination as well as information and data sharing among local authorities.