China Cracks Down on Imported Infections Amid Rush of Returnees 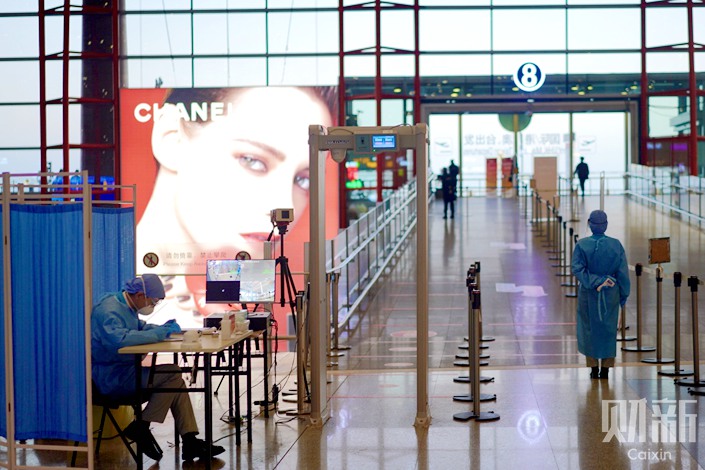 Police in Beijing opened an investigation of a Chinese woman who allegedly concealed symptoms of the new coronavirus infection while returning to the city from the United States as China grapples with a rising number of imported cases.

The 37-year-old woman, who was identified only by her surname Li, has lived in Massachusetts with her husband and son. The three arrived at the Beijing Capital International Airport March 13 on an Air China flight from Los Angeles.

Li is among 123 imported coronavirus cases recorded by Sunday night since the first such case was reported in late February involving a Chinese citizen returning from Iran. The rising number of imported cases reflects a renewed threat facing China as new infections increase outside its borders even as the domestic outbreak ebbs.

In response, authorities are cracking down on behavior that may violate provisions of China’s Criminal Law related to impairing the prevention and treatment of infectious diseases, according to Pan Xuhong, the deputy director of the Beijing Public Security Bureau. The crime is often subject to less than three years but could involve as much as seven years of imprisonment for especially severe violations.

The Beijing Public Security Bureau pledged tougher enforcement to punish people who intentionally conceal Covid-19 symptoms and the risk of exposure to the disease. China’s Supreme Court and top Procuratorate issued a new guideline Monday elaborating on violations that could lead to criminal charges related to disease control and customs declarations during the outbreak.

In addition to Li, several other individuals who were confirmed with infection after returning from abroad also face criminal investigation for concealing health conditions, including the patient in the first imported case, a 23-year-old translator who returned from Iran, and a Henan resident who returned from hard-hit Italy.

Li’s behavior created a significant risk of infection to fellow travelers, Pan said. She was confirmed with the infection shortly after arriving at Beijing and was sent to a hospital. Her husband and son were placed in isolation for observation, according to Beijing’s disease control authority. A total of 59 others who had contact with Li were also quarantined.

Li had shown symptoms consistent with Covid-19 since two weeks ago after one of her colleagues who attended a meeting with her in late February was diagnosed with the disease. However, Li didn’t report her condition when she boarded the flight and took medicine to control fever and avoid detection in temperature screening, officials said.

Li told Chinese officials that she was unable to get tested for the new virus in the U.S.

China reported 16 new cases of infection on the mainland Sunday, including 12 imported cases, according to the National Health Commission. The daily rise of imported cases exceeded the number of locally transmitted cases for a third day.

All four new domestic cases were reported in Wuhan, the epicenter of the outbreak, while the 12 imported cases included three from Spain, three from Italy, two from the Philippines, and one each from Thailand, Switzerland, the U.K and Egypt, according to local health commissions.

Since March 11 when the World Health Organization declared Covid-19 a global pandemic, China has had about 120,000 daily border entries via land, sea and air transport, the National Immigration Administration (NIA) said Monday. During that period, about 20,000 people entered China daily via international flights, with around 10% being foreign nationals, according to the NIA.

On Sunday, the Beijing municipal government decreed that all travelers from outside the Chinese mainland, regardless of nationality, will have to stay in designated isolation centers for 14 days upon arriving to prevent people from spreading the disease to their families and within their communities. People with special circumstances can request home isolation.

Beijing Capital International Airport said all inbound flights should dock in a designated area and all travelers should receive temperature and other checks.