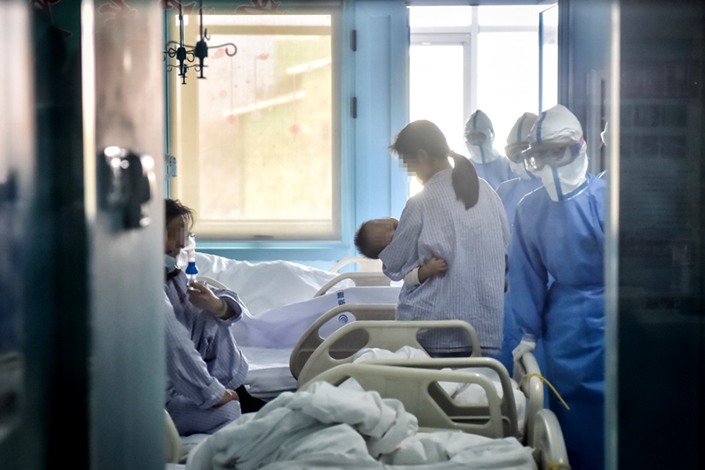 Patients at a ward in Beijing Ditan Hospital on Feb. 3. Photo: Xinhua

Younger children are more likely to suffer severe symptoms than older ones after contracting Covid-19, according to a new study, as it added to a growing body of research showing that children suffer from the disease less severely than adults.

The latest study on pediatric Covid-19 was one of the biggest to date, with researchers from the pediatric division of the medical school at Shanghai Jiao Tong University analyzing 2,143 cases that occurred between Jan. 16 and Feb. 8. The results were published in the journal Pediatrics.

Of the cases in the study, the average age was 7 years old, with 379 cases involving children 1 year old or younger. Boys accounted for 1,213 cases, or 56.6% of the total, while girls made up the remaining 930, or 43.4%. The research showed the number of cases increased through the end of January and peaked on Feb. 1 before starting to come down. It also revealed a clear trend of movement of infections from Hubei into areas surrounding the province.

Of the cases studied, 4.4% had no symptoms, 50.9% had only mild symptoms and 38.8% had moderate symptoms, accounting for 94.1% of all cases. The remaining 5.9% were serious and critical cases, which was well below the 18.5% ratio for adults who suffered more serious symptoms. One death among the group was a 14-year-old boy from Hunan who died on Feb. 7.

Other research has found similar results, though no one is sure exactly why children seem to suffer from the virus at much lower rates of severity than adults. The authors of the latest paper proposed that children could suffer less because they are generally more pampered, and thus tend to have less contact with sick people and other viral sources.

Children may also be less sensitive to the virus because the ACE2 receptor proteins in their tissue — the pathway through which the virus infects human cells — are less mature and have less binding ability, the researchers said. They added children also tend to suffer more respiratory infections in winter than adults, which may give them better ability to fight off disease.

While the virus more broadly is less severe in children than adults, it can be more troublesome for small children, especially infants. The data showed that children less than 1 who got the disease suffered severe to critical symptoms 10.6% of the time. The ratio went down after that, to 7.3% for children ages 1 to 5, to just 3% for those 16 and older.

Several other studies have showed that children tend to have longer incubation and longer virus-shedding periods than adults. Family cluster infection is the major cause of cases in children, which can trigger community outbreaks if not identified in time, researchers warned.