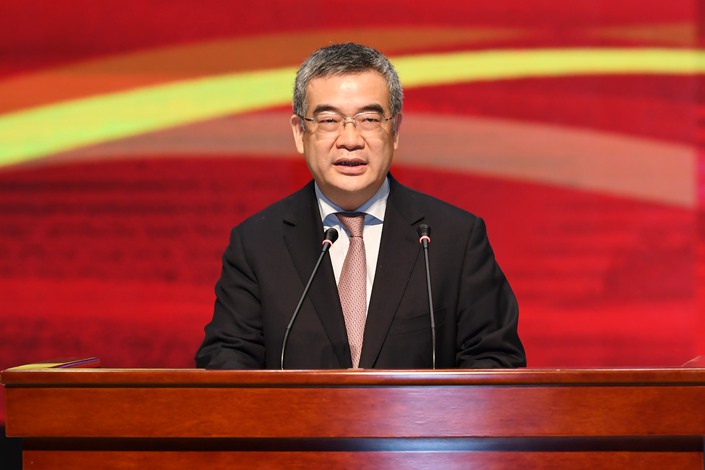 On Friday, Citic Group announced (link in Chinese) at a management meeting that Zhu has taken over as party chief, replacing Chang Zhenming. Zhu will also succeed Chang as chairman shortly, sources with knowledge of the matter told Caixin.

Zhu, 52, joined Bank of Communications Co. Ltd., one of the country’s biggest state-owned commercial lenders, in 1993. Over the next two decades, he climbed the ladder to become an executive vice president of the bank in 2013.

In 2015, Zhu was made an executive vice president of Bank of China Ltd., another big state-owned commercial lender. In June 2016, he became a vice governor of Southwest China’s Sichuan province, making him one of the earliest examples of the recent trend of veteran financiers being given provincial leadership roles.

In July 2018, Zhu was appointed deputy governor of the PBOC in charge of its financial stability, credit information system and state treasury bureaus. A source close to the central bank said that Zhu excels at coordinating with his superiors and subordinates and that he “has rich grassroots experience and is very pragmatic.”

A regulator told Caixin that it seems to be “an important task to have the deputy governor of the central bank lead Citic Group at the moment.”

Citic Group, formerly China International Trust Investment Corp., which was established in 1979 with the support of late state leader Deng Xiaoping, is wholly owned by the Ministry of Finance. It held a 58.1% stake in Hong Kong-listed Citic Ltd. at the end of 2018, which had HK$8 trillion ($1 trillion) in total assets at the end of June 2019.

Zhu’s top priority will likely be defusing some of Citic Group’s financial risks, such as the debt problems of its Shenzhen-listed subsidiary Citic Guoan Information Industry Co. Ltd., the sources said.

Zhu said at a forum in November 2018, not long after joining the PBOC, that China is in a critical period of economic restructuring and upgrading, and there are both opportunities and challenges for financial holding conglomerates. At that time, the PBOC and other regulators had just rolled out draft regulations for financial holding companies, including a pilot program to test the regulations on five financial companies.

Chang Zhenming, 63, who stepped down as party secretary, was appointed the conglomerate’s party chief and chairman in 2010, and has been with Citic Group for 34 years.