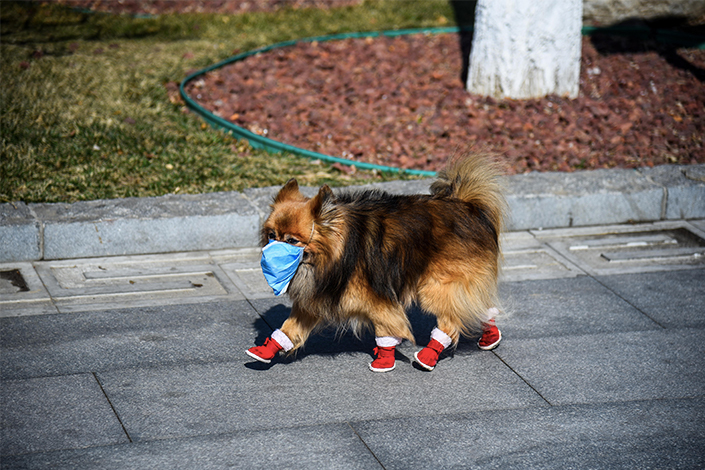 A dog has been outfitted with a mask for its walk in a park in Beijing on March 9. Photo: IC Photo

A second dog in Hong Kong has tested positive for traces of the virus that causes Covid-19, even as six other quarantined animals have continued to test negative.

The positive results from the second dog deepen a mystery about the new coronavirus that has frightened pet owners and baffled scientists trying to figure out how household pets can repeatedly test positive for the virus even though experts say there is no evidence they can transmit it to humans or fall ill themselves.

Hong Kong’s Agriculture, Fisheries and Conservation Department (AFCD) said Thursday a German shepherd with an infected owner had repeatedly tested positive for the virus, prompting the department to call on sick pet owners to hand over their dogs and cats to be quarantined and tested.

No positive results have been obtained from the other quarantined animals, which include a mixed-breed dog from the same household in Pok Fu Lam, a French bulldog from Tseung Kwan O and three short-haired cats from a house in Yau Tong, according to the AFCD. None has shown signs of the disease.

Positive nucleic acid tests such as those performed on the animals can confirm the presence of traces of the SARS-CoV-2 virus, which causes Covid-19, but do not mean the virus is whole, alive, transmissible or causing disease, experts say.

“Pet owners should always maintain good hygiene practices and under no circumstances abandon their pets,” the AFCD said.

The fresh case follows the death on Monday of a Pomeranian quarantined on Feb. 26 that tested “weak positive” for the virus five times, before testing negative on March 12 and March 13. It was returned to its owner on March 14.

“The amount of virus in the sample from (the German shepherd) was higher” than that of the Pomeranian, the AFCD said.

Like the other animals, the Pomeranian did not exhibit symptoms associated with infection in humans during its two-and-a-half weeks in quarantine. Its cause of death was undetermined because the owner had been unwilling to allow an autopsy, an AFCD spokesperson said, but the dog was “geriatric and (had) chronic illness.”

Experts say there’s no way of knowing what symptoms a dog might display if it somehow contracted Covid-19.

Investigators who sequenced viral samples from the Pomeranian and its owner found the sequences were very similar, and concluded the owner had infected the dog. The news prompted some dog-lovers in coronavirus-stricken areas to start fitting their pets with face masks.

Sanjaya Senanayake, a virus expert at the Australian National University, told Caixin previously that it was likely the dog was not actually infected with the disease, but had simply licked up some bits of virus that its infected owner had coughed and sneezed around the house.

But Thomas Sit Hon-chung, assistant director of inspection and quarantine at the AFCD, pointed to the longevity of the virus traces in the dog’s system, and the fact tests were based on both oral and nasal swabs, suggesting more than just surface contamination. “If it was contamination, the dog’s nasal or oral mechanism should have a way to clean (the body of) the viruses,” Sit said.

Blood tests for antibodies that would have shown the Pomeranian’s immune system fought the infection returned negative, the AFCD reported on March 12. But the samples were taken on March 3, which the department noted may have been too early in the course of infection for such antibodies to develop. Furthermore, in rare cases humans infected with other types of coronavirus do not develop antibodies, it said.

The German shepherd was tested again Friday but the results are not yet known. All the animals are quarantined at a government facility at the Hong Kong Port of the Hong Kong-Zhuhai-Macao Bridge. The AFCD said it would continue to test the animals.

In total, 11 dogs and cats had been quarantined at the facility as of Friday, with four returned to their owners after their tests came back negative. None has showed any sign of the disease.

Those so far released include a shiba inu and an exotic shorthaired cat.

Sick pet owners should restrict their contact with animals, but there is no evidence pets can transmit SARS-CoV-2 to humans or be sickened by the virus, the AFCD said.

Despite testing thousands of samples from domestic dogs and cats, U.S. veterinary diagnostic company IDEXX Laboratories Inc. announced last week that it had found no positive results in any of them.