Editorial: Certainty Is Needed as China Returns to Work 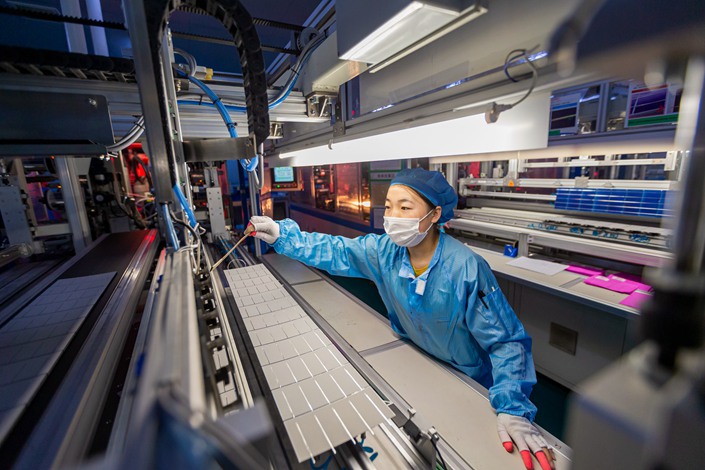 We now have preliminary confirmation of the potential impact of the Covid-19 pandemic on China’s economy. Data recently released by the National Bureau of Statistics show that value-added industrial output, fixed-asset investment (excluding agriculture), and total retail sales respectively fell by 13.5%, 24.5%, and 20.5% year-on-year nationwide during January and February.

At the same time, in a bid to undo some of the losses caused by the epidemic, governments at all levels in China have been continuously ramping up economic stimuli, and many regions have accelerated efforts to get businesses up and running again. While we understand this sense of urgency, the outbreak still hasn’t passed. The damage it has wrought cannot be fixed by the state simply slapping on a Band-Aid.

Although the central government has said it will “speedily establish a suitable social and economic order that operates alongside epidemic control,” we must guard against sweeping and politically expedient approaches to returning to work. Short-term stimulus policies are necessary, but developing breakthrough systemic reform is even more important.

Governments in China now find themselves in a dilemma. If they fully return to work and relax restrictions on the movement of people, they might set off a second wave of the epidemic or a “backflow” of infections from abroad. But if they maintain the strict disease-control measures of the outbreak’s initial phase, they may worsen the government’s fiscal situation, throttle cash flows to many businesses, and severely damage people’s livelihoods. On March 18, the Politburo Standing Committee required provincial-level jurisdictions to become the units used “to promote the restoration of economic and social order” and encourage a return to work according to individual levels of risk, a principle we think is correct.

What makes people uneasy about returning to work is that some local governments seem to be lurching from one extreme to the other. After the Lunar New Year holiday, some businesses tried to rev themselves back up only for local authorities to restrain them through a litany of approval procedures. But soon afterward, the tone of national policy noticeably shifted, and many areas again started urging companies to get up and running again.

Recently, a local government notice uploaded to the internet “in error” indicated that businesses that cannot return to work as quickly as possible will be treated as if they have violated the spirit of central government policy. Localities have published their official production rates, but indexes like energy use, numbers of returnees, and subway use don’t seem to add up. Top Communist Party and government officials everywhere should weigh up the pros and cons and tailor policies to local conditions on the principle of respect both for medical expertise and for the desire of businesses to return to production. On this issue, the government should play a service and support role, not merely a supervisory one.

Evidently, accurate judgments about the epidemic must form the basis of all policymaking. China has now managed to stabilize its outbreak, but medical personnel in the disease-hit city of Wuhan and the surrounding province of Hubei still face an onerous task. In other areas, population flows and concentrations are perhaps rebounding from the epidemic, while the spread of Covid-19 overseas increases the risk of China “importing” cases from abroad.

Economic and social targets must be set with the outbreak in mind and with as much certainty as possible. Many people have suggested revising down China’s economic growth target for this year. Given the obvious current and future impact of the virus, the central government must state its position on this as soon as possible so that localities, businesses, and residents can reset their expectations.

Recently, governments have released policies aimed at stabilizing the economy and securing people’s livelihoods. The key is how these policies are implemented. Even more importantly, we must accelerate the pace of reform and opening up. Top leaders already recognize that without stronger reform, they can’t easily secure foreign trade and investment. In many ways, domestic trade and investment is similar.

Wider-ranging reforms cannot be avoided. The Covid-19 epidemic has already furnished us with experience and lessons. It has revealed the systemic and mechanism shortcomings that persist in China’s medical, disease prevention, social security, public warning, and emergency response sectors, which can only be resolved through an across-the-board overhaul.

For instance, there is no doubt that the medical and elderly care industries are rife with malpractice and risk, but attempts to reform them in recent years have stagnated amid disputes over how those issues should be resolved. The epidemic has already come at huge fiscal expense, something that has been explained away as much-needed flexibility during a national emergency, but in the end, we still need to clearly define rules and responsibilities, a lack of which continues to blight the current medical insurance system. In addition, many elderly people, especially those with underlying conditions, have died during the epidemic. Evidently, we need to place elderly care and pension reform back on the agenda.

Another example is how to implement the principle of competitive neutrality. Among all types of market actors, small and midsized businesses are undoubtedly the hardest hit by the epidemic. Back when the outbreak first erupted in China, many such businesses said they didn’t have enough cash to last three months.

Currently, governments are encouraging financial institutions to give more support to private and small-scale businesses to tide them through their cashflow problems. It’s hard to judge the outcome of that move just yet, but we hope it will at least avert widespread bankruptcies and in turn stabilize employment and society as a whole. In future, we must stop discussing competitive neutrality on paper and ensure we enact it in practice.

Many market actors think that the economic policies governments have enacted since the epidemic began make sense. However, economic policy needs other kinds of active cooperation backing it up, not conflicting with it. Despite taking a hit from the epidemic, the Chinese government has repeatedly said it will accelerate opening to the outside world. We must bear in mind that such openness not only includes economic openness, but also social and cultural openness; not only systemic and policy openness, but also an open mentality. In dealing with the outside world, we need to carefully craft and protect an image of a responsible superpower. Reckless and small-minded words and deeds only serve to damage that reputation.

Controlling the Covid-19 epidemic is a huge test for China’s governance system. In this test without papers, getting the country back to work is the most important question of all. As the outbreak casts a shadow over global demand, domestic markets will be the bread and butter of businesses seeking a return to work. But when it comes to raising demand at home, stimulus policies have limited effects and there is little room for maneuver. Breakthroughs in systemic reforms are the best hope for fanning this demand, but the window for enacting them is closing.