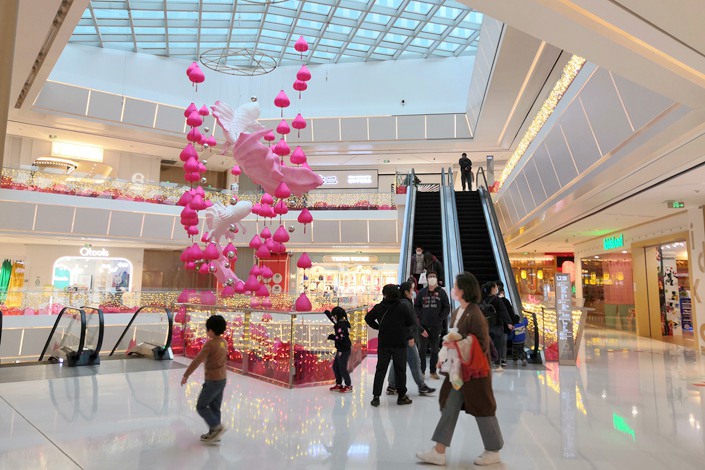 Shoppers in a mall in Shanghai's Pudong New Area on March 22. Photo: VCG

Vouchers, subsidies, and even helicopter money … all are being touted as ways to help the world’s second-largest economy and its 1.4 billion people recover from the impact of the coronavirus epidemic.

Many local Chinese governments are offering vouchers for consumers to spend on activities and companies are giving coupons offering discounts on goods. One member of the country’s top political advisory body has even proposed a 2,000 yuan ($283) one-off payment to the entire population

But some economists say they doubt such efforts, however well-intentioned, will be effective because they cannot compensate for the drop in income suffered by millions of people furloughed or unable to work during the crisis. Nor can they overcome concerns that the virus may reappear, which affect consumer confidence.

The epidemic has not yet passed and residents still have a certain degree of fear, Liang Zhonghua, a macroeconomic analyst at Zhongtai Securities Co. Ltd., told Caixin. Some economic activities such as offline services and tourism are still suffering from disruption and will remain weak, he said. In addition, the value of the coupons being issued is nowhere near large enough to compensate for income lost during the outbreak, he said. As a result, they will have a limited impact on consumption, he added.

But dozens of local governments have decided that doing something is better than doing nothing.

Three major cities in eastern China — Nanjing, the capital of Jiangsu province; Jinan, the capital of Shandong province; and Ningbo, a port city in Zhejiang province — have issued coupons with a combined face value of more than 400 million yuan to encourage spending on leisure and tourism. The coastal city of Qingdao in Shandong launched a 100-day “consumption season” focused on promoting 10 major sectors such as shopping, dining, tourism and sports using retailer discounts and government subsidies.

Jiangxi province has announced plans to trial 2.5-day weekends in the second quarter where visitors to top tourist attractions and some rural tourist spots will get a 50% discount on Friday afternoons.

Local governments in some larger cities are trying to boost spending on big-ticket items produced locally. Changsha, the capital of Hunan province in Central China, said earlier this month that anyone buying a car made by certain local factories will get up subsidies of as much as 3,000 yuan. The promotion runs until June 30. Foshan, a city in Guangdong province, is offering subsidies (link in Chinese) of 2,000 yuan to 5,000 yuan to each local car buyer who meets certain conditions.

The National Development and Reform Commission, the country’s economic planning agency, has said that while it supports efforts to boost consumption, it has urged local governments to consider the funding implications before embarking on any initiatives.

But a finance and tax researcher, who declined to be identified, told Caixin that vouchers can only provide a temporary fillip to consumption. The best boost will come from providing people with a sustainable income through employment which improves their propensity and ability to consume, he said. Consequently, helping businesses get back to work is crucial. “Stable employment means stable income, and when household income is stable, consumption will naturally stabilize,” he said.

Shan Yuxiao contributed to the story