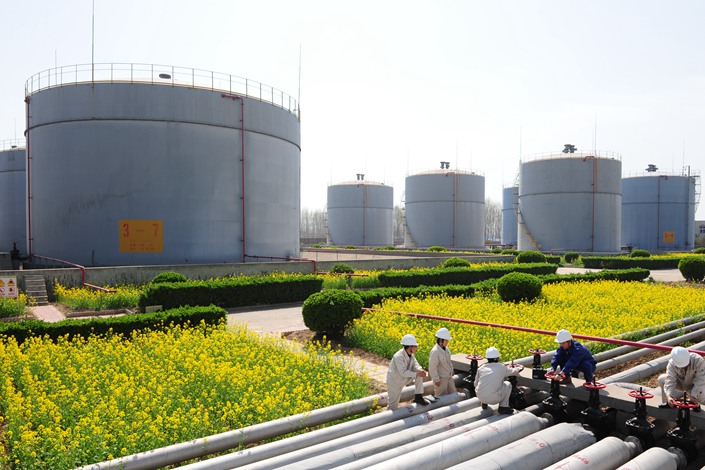 Chinese ports have added around 1.5 million tons of commercial crude oil to their stockpile since Match 7. Photo: IC Photo

As oil prices have dropped to an 18-year low, China’s oil storage sector has seen demand soar as companies hoard the fossil fuel.

Since March 7, the day after talks between oil-producers cartel OPEC and Russia collapsed and prices began to plummet, Chinese ports have added around 1.5 million tons of commercial crude oil to their stockpile, data from energy information provider OilChem China showed. That represents an increase of about 5%, bringing the total to 29.45 million tons.

“All of China’s coastal storage tanks and those near rivers are all booked, wherever they are in the country,” a manager at a Chinese oil storage company said. The same situation is playing out in South Korea also, he said, with virtually all tanks either already loaded with oil or booked to be filled soon.

“Traders, refiner and suppliers are all flocking to find any available tanks,” he added.

The spike in inventory came as the world’s oil-producing countries, led by Saudi Arabia, dramatically raised their output to win market share. This has seen China’s oil and oil product inventory, already larger than usual due to a number of flight cancellations since the start of February, grow even larger

“Major trading companies have been scrambling to rent as many tanks as they could over the past two weeks,” a manager with an international trading company said, which has seen the cost of rental rise more than 10%.