China Should Just Give Its People Cash, Experts Say

By Wang Su and Guo Yingzhe 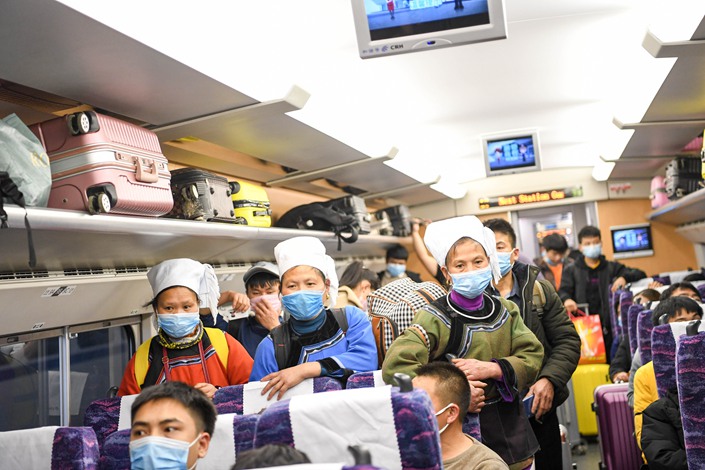 Migrant workers from Guizhou province prepare to get off a train in Guangzhou, Guangdong province, on March 13. Photo: People.VCG

Chinese economists have called on the central government to provide direct cash transfers to low-income families as they find it difficult to make ends meet amid the Covid-19 pandemic.

Since the novel coronavirus broke out in China at the end of last year, millions of people have lost their incomes as factories and stores were shut down to contain the virus. While businesses in the country are now gradually resuming work as the outbreak eases, employment is taking another hit as overseas demand plummets while the virus spreads overseas.

The official surveyed urban unemployment rate rose to 6.2% in February, up 0.9 percentage points from the previous month, and economists anticipate it may worsen in the coming months given sluggish economic projections.

Other countries including the U.S. have offered cash subsidies to individuals and families affected by the epidemic, and some economists suggest China follow suit. Gan Li, an economics professor at the Southwestern University of Finance and Economics, has called for the government to provide a one-time cash transfer to low-income people to help tide them over and stabilize consumption. Gan suggests the subsidy cover some 176 million people at a cost of 286 billion yuan ($40.3 billion), raised by issuing special-purpose sovereign bonds.

The Politburo, the 25-member top decision-making body of China’s ruling Communist Party, decided last week to sell such debt and run a higher fiscal deficit to prop up the country’s virus-hit economy. But where the money raised will go remains unclear.

No country, under this kind of shock, can only take measures on the supply side, Gan said. “Businesses cannot be saved without demand. We don’t know what is going on in any given company, whether it should be saved or not, but we know how to protect residents,” he said.

Yu Jiantuo, a deputy secretary-general of the China Development Research Foundation, said in a Caixin article (link in Chinese) that direct cash transfers are a more effective solution than the consumption vouchers issued by some local governments to boost spending in hard-hit sectors like tourism and catering. He said what individuals and families affected by the epidemic need now is cash. “How many families want to travel when they are worried about buying rice, vegetables and meat?”

Coronavirus patients, residents of Hubei province and those who were already struggling before the outbreak face the greatest difficulty.

Some coronavirus patients remain unable to work even after recovering, as they have been labeled by authorities as presenting health risks and faced discrimination in the labor market.

And those living in Hubei, even if they have not contracted the disease, are experiencing income shocks as the province at the epicenter of the outbreak was shut down longer than other regions. Its agricultural products could not be sold during the shutdown, and as the province opens back up, must be sold at lower prices. Many migrant workers in the province have not yet returned to their workplaces.

For many poor families nationwide, the epidemic has exacerbated financial difficulties by cutting off their income sources, many of which were already unstable. Some have run out of money and are resorting to online lenders or maxing out credit cards to pay for daily necessities.