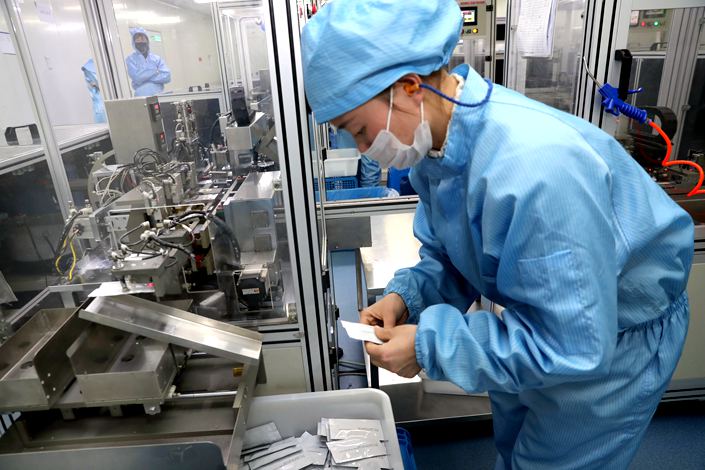 A worker on the production line for coronavirus antibody detection kits in Nantong, Jiangsu province, on March 19. Photo: People.vcg

China has banned the export of coronavirus test kits and other medical supplies that do not meet the country’s own standards.

The decision follows controversies in several virus-stricken nations over the poor quality of some tests and medical supplies exported from China.

China’s Ministry of Commerce, General Administration of Customs, and National Medical Products Administration (NMPA) announced in a joint statement this week that from Wednesday, Chinese customs will only allow the export of medical supplies which are certified by the NMPA. Customs previously allowed the export of medical supplies that had been certified by medical regulators in other countries, but not by the NMPA.

Exporters will also be required to declare to customs that their goods meet the quality standards of the importing country or region.

The clampdown came after the Dutch health ministry told hospitals to hand back 600,000 defective face masks imported from China, and Slovakian and Turkish officials questioned the effectiveness of Chinese tests they had purchased.

But the greatest backlash has been in Spain, which has recorded a fifth of the world’s Covid-19 deaths.

Chinese authorities last week distanced themselves from a coronavirus antigen test produced by Shenzhen Bioeasy Technology Co. Ltd. that was used in Spain, after Spanish microbiologists found it only had a “sensitivity” of 30%.

That means the test only correctly identifies 30% of people who actually have the virus, rendering it less reliable than flipping a coin.

The allegations were revealed by Spanish newspaper El País, which reported that the Spanish government had returned 58,000 tests to Bioeasy. The news came amid an escalating Covid-19 crisis in the country, which has been reporting around 8,000 new cases of coronavirus each day for the past week and had more than 104,000 total as of Thursday, with 9,300 deaths.

The Chinese Embassy in Spain said Bioeasy was not on a list of qualified suppliers that China’s Ministry of Commerce had given to Spain.

In an explanatory note to the Shenzhen Stock Exchange, Bioeasy representatives said the tests had obtained European Union CE certification authorizing their sale, and alleged that Spanish health workers may be using the kits incorrectly.

The company said the products were not sold in China because they had not been approved by the NMPA.

While the advent of bedside testing for coronavirus would help combat the pandemic, reliable rapid antigen tests have not yet emerged.

There are three main types of Covid-19 tests with different uses. Nucleic acid tests (NATs), which identify genetic traces of the virus, are considered the gold standard when it comes to accuracy, but must be done in a lab. Antibody tests look for the substances the body's immune system creates to fight the disease, and can be done quickly at the bedside, but are only useful later in the course of someone’s infection or to identify those who have recovered from the disease. Antigen tests detect the virus’s proteins and can also be done quickly at the bedside, but are generally less sensitive.

Efforts to develop effective antigen tests for Covid-19 have so far proved disappointing, said one industry veteran who pointed out that none have yet been approved by China’s regulator. To skirt China’s long approval process, the NMPA has granted emergency approval to 23 coronavirus tests, including 15 nucleic acid tests and eight antibody tests.

But with so many tests now available in China, the regulator has slowed down emergency test approvals, according to industry sources who Caixin chose not to identify because they were describing internal government deliberations.

With Europe in the depths of a coronavirus crisis it was an obvious market for manufacturers of tests not approved in China, regardless of how well their products worked.

Easier to get certified in Europe than China

When Bioeasy was questioned about its tests, it pointed to the fact they had obtained a European Union CE mark authorizing their use in the jurisdiction. But in that jurisdiction, unlike implantable medical devices, most medical tests only require a pledge from the manufacturer that they work.

A person in charge of one test-maker in East China’s Shandong province told Caixin the company had entrusted a European distributor to apply for a CE mark on its behalf. They said it took about 40 days, and cost them about $14,000.

He said that in China, without the emergency channel, it would have taken about two years to get certification, and up to around $420,000 for expenses including trials.