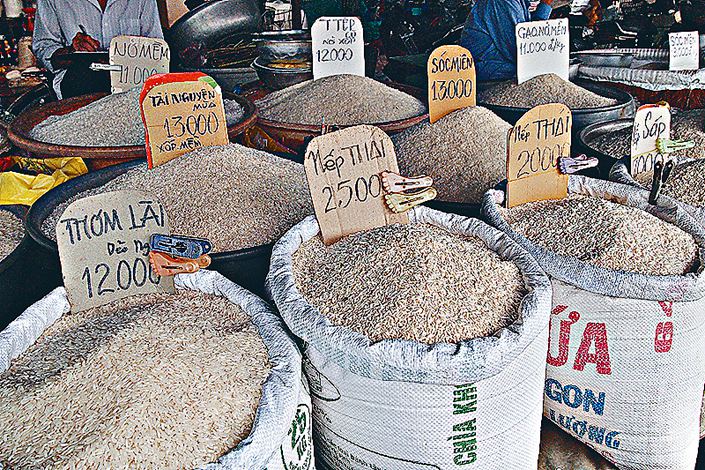 Rice for sale at a market near the Mekong river in Vietnam. Photo: VCG

Multiple countries have limited or formally restricted agricultural exports in recent weeks, due to fears that coronavirus outbreaks at home and abroad could cause shortages in their domestic markets.

Cambodian Prime Minister Hun Sen announced Monday that the country will suspend exports of white rice and rough rice — or whole rice grain — starting on April 5 to ensure local food security amid the Covid-19 pandemic, allowing only fragrant rice to be traded.

Around 40% of the Southeast Asian nation’s 620,000 tons of rice exports last year were shipped to China, data from the Cambodia Rice Federation show.

Vietnam, the world’s third largest rice exporter, stopped accepting new rice supply contracts from overseas on Saturday but hasn’t rolled out any specific export restrictions. The nation, which accounts for 15% of the world’s rice trade by volume, shipped 6.37 million tons of rice abroad in 2019, data from its Ministry of Industry and Trade shows.

Hanoi’s restrictions on rice trading came after orders from overseas spiked. A statement from Vietnam’s government shows there was a 31.7% year-on-year jump in Vietnam’s rice export volume in the first two months of this year, to 928,798 tons. “If exports keep rising at this pace, Vietnam would face the risk of shortages for domestic consumption,” it said.

Kazakhstan has also adopted a similar strategy by suspending exports of 12 kinds of food products including wheat and sugar since March 22 to secure domestic supply, while Egypt has issued a notice saying it is suspending exports of all kinds of legumes for three months starting Saturday as “part of preventive measures.”

Besides growing overseas demand, locals stocking up in fear of shortages to come have also created short-term shortages. “I used to buy 10 kilograms of rice at a time, but this time I brought 50 kilograms of rice,” a woman living the Cambodian capital Phnom Penh told Caixin.

Thailand Deputy Prime Minister Jurin Laksanawisit announced on March 26 the country was banning the export of eggs for seven days due to a shortage in the domestic market, then extended the ban for a further 30 days on March 30.