By He Jingwei, Di Ning and Matthew Walsh 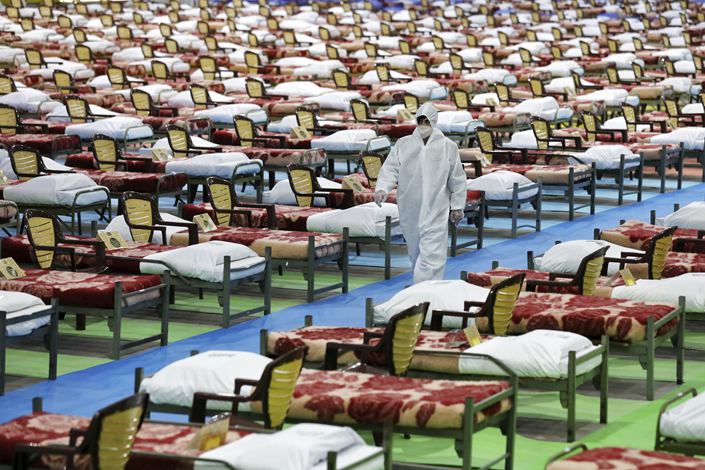 A medical worker walks through a makeshift hospital at the international exhibition center in Tehran, Iran, on March 26. Photo: Xinhua

As the novel coronavirus pandemic threatens to overwhelm health care systems around the world, many countries are taking a measure that may seem more suited to war zones than city centers.

In recent weeks, as the epicenter of the outbreak has shifted to Europe and North America, governments in hard-hit nations like the United States, Italy and Spain have set up so-called field hospitals in major cities to relieve the burden on existing medical infrastructure.

This comes after Chinese public health officials credited the construction of emergency hospitals with playing a key role in eventually containing the spread of the virus in the 11 million-strong city of Wuhan, where the world’s first outbreak occurred.

In New York City’s iconic Central Park, a tent hospital containing 68 beds officially opened on Tuesday. Other American cities, including Seattle and Miami, are also preparing makeshift hospitals. The U.S. had logged more than 216,000 cases as of Thursday, more than any other country’s official count, according to a tally kept by Johns Hopkins University.

British Health Secretary Matt Hancock said at a press conference Tuesday that the 100,000-square-meter ExCel London conference center is being converted into an emergency hospital that from next week will be able to treat an initial 500 patients. Authorities in the U.K., where about 30,000 people have been diagnosed with Covid-19, the pneumonia-like disease caused by the novel coronavirus, worry that the capital may not have the capacity to treat an expected rise in the number of patients with severe breathing difficulties.

The concept of field hospitals comes from battlefield scenarios, in which medical units routinely set up modular medical centers away from the frontlines to provide flexible emergency care for wounded soldiers in a changeable situation where the threat to life is high.

Before Covid-19, China already had extensive experience adapting field hospitals for civilian use during disasters. After the 2008 Wenchuan earthquake killed tens of thousands and injured many more in the southwestern province of Sichuan, a temporary field hospital operated by a unit of the Chinese military treated nearly 10,000 injured people and performed some 432 operations in the space of a month.

The authorities opened similar facilities in Wuhan on Feb. 5 as the number of Covid-19 cases in the city continued to soar. Most field hospitals occupied existing buildings and were used as a large-scale, low-cost way to prevent people with mild symptoms from having to quarantine at home and risk spreading the virus to others around them.

By the end of February, Wuhan housed 16 field hospitals and had treated a total of 12,000 people. The hospitals suspended service on March 10, by which point the city’s official caseload had plateaued.

In a Sunday broadcast, Lu Shan, a professor at the University of Massachusetts Medical School, said field hospitals had eased the strain on China’s public hospitals and helped to separate people with severe disease from those with lighter symptoms or no illness, making them one of China’s most valuable lessons from fighting the Covid-19 epidemic.