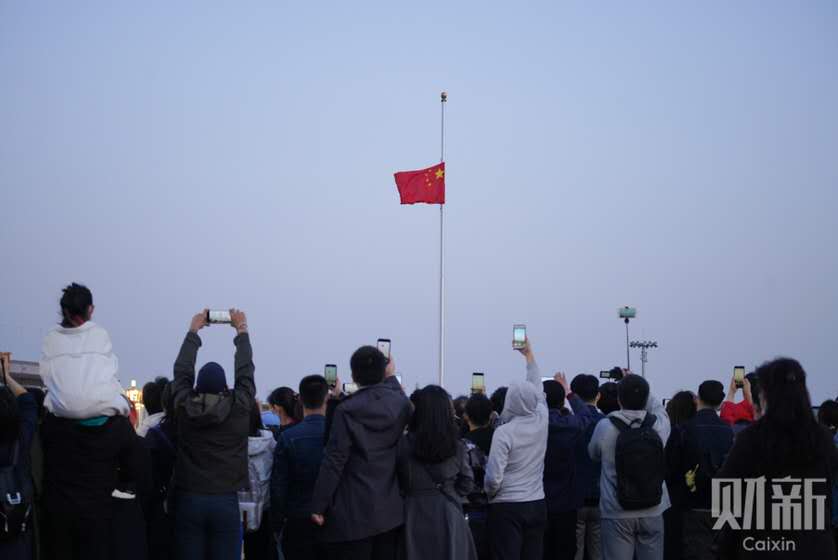 A crowd takes photos of a flag lowered to half-staff during a memorial ceremony for China's Covid-19 victims in Tiananmen Square, Beijing, Apr. 4, 2020. Photo: Caixin

It’s traditionally a day for Chinese families to come together, visit the tombs of their ancestors, and honor the dead with ritual offerings of gifts, food and drink. But due to the country’s deadly coronavirus outbreak, this year’s Qingming Tomb Sweeping Day has been a more distant affair than usual.

Across the country, authorities have restricted access to grave sites in a bid to avoid a resurgence in the spread of coronavirus, which causes the respiratory disease Covid-19. Officials suspended group gatherings and encouraged families to conduct “online” tomb-sweeping instead.

This year’s festival, which lasts for a two-week period centering around Saturday, falls at a particularly poignant time, as China comes to terms with the anguish of an epidemic that has so far infected about 83,000 people and killed more than 3,300, according to official figures from the National Health Commission. Local governments nationwide have begun easing weeks-long quarantine restrictions as the number of new domestic cases has dwindled.

But constraints in many areas were still stringent enough on Saturday to prevent people from marking the festival as freely as usual. At Beijing’s Babaoshan Revolutionary Cemetery, where many of modern China’s most consequential figures are interred, a trickle of visitors tended to the graves (link in Chinese) after authorities barred people from visiting in large groups.

A similar order was in place in the central city of Wuhan, where the virus was first detected and where 2,570 people had died (link in Chinese) from Covid-19 as of Saturday, according to the municipal health commission.

With officials in the city of 11 million having started to loosen quarantine controls ahead of a formal rollback of transport restrictions there starting Wednesday, mourners have been queuing for hours outside crematoriums to collect the remains of people who died during an epidemic that overwhelmed local health care systems. A truck driver interviewed by Caixin last week described (link in Chinese) delivering thousands of commemorative urns to a Wuhan crematorium, although it remains unclear whether the containers indicate a higher-than-reported Covid-19 death toll in the city.

Like everywhere else in China, Wuhan observed (link in Chinese) a three-minute memorial on Saturday for those who have died in the epidemic. At 10 a.m., people in the city fell silent while air-raid sirens and train klaxons wailed as if in mourning and drivers pulled over and added their horns to the cacophony.

Across the country, national flags flew at half-mast, entertainment events were suspended, and many internet websites — including Caixin Global’s — decked out their homepages in somber black-and-white.

With many grave sites closed or open by appointment only, some dutiful descendants turned to modern technology to pay their respects to the dead. More than 13 million people in China used (link in Chinese) so-called online tomb sweeping platforms on Saturday, according to the Ministry of Civil Affairs.

Cemeteries in 19 Chinese cities, including those in the commercial hub of Shanghai, held “cloud tomb-sweeping” ceremonies in which staff held online broadcasts of themselves paying tribute to the deceased, local news outlet Shanghai Daily reported.

Virtual tomb-sweeping has grown in popularity in recent years thanks to a surge in online services geared toward workers residing in cities far from their ancestral homes. The Covid-19 outbreak has made them a feasible alternative to other means of paying one’s respects remotely, such as by hiring people to sweep the grave on the family’s behalf.