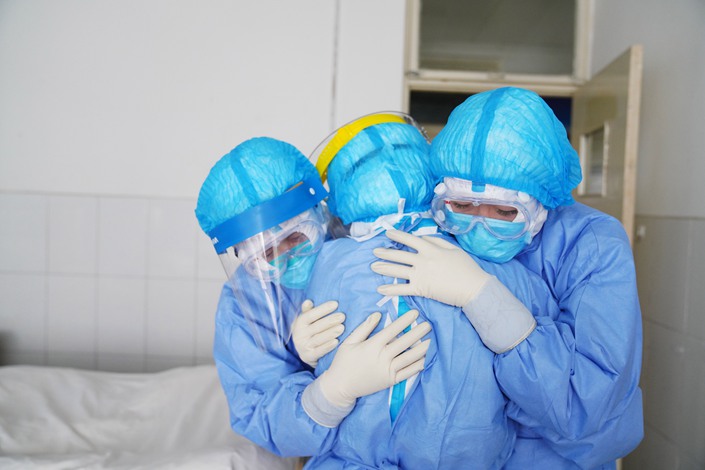 After Covid-19 ripped through Wuhan, killing thousands and sparking an unprecedented months-long lockdown, the central Chinese city is now cautiously navigating a path back toward normality. But although the risk of catching the pneumonia-causing virus seems to be receding, the epidemic’s mental health impacts will likely linger for a long time to come.

As officials gradually dismantle a strict citywide quarantine ahead of a planned reduction of interprovincial transport restrictions on April 8, many Wuhan residents, as well as the city’s former Covid-19 patients and medical workers, are reeling from psychological wounds inflicted by the virus, which had infected more than 50,000 people in the city and killed at least 2,553 as of Tuesday, according to the Wuhan Municipal Health Commission.

The experiences of people in the city that recorded the world’s first Covid-19 cases late last year carry lessons for the more than 170 other countries and regions afflicted by what has become a global pandemic. They also raise questions about the capacity of China’s nascent mental health sector, which has long been blighted by a lack of qualified personnel, restrictive laws and a cultural tendency to ignore or minimize psychological distress.

Disasters like life-threatening epidemics, which can overwhelm the capacity of communities to respond, are frequently associated with lasting mental health issues. Research conducted after an outbreak of SARS (severe acute respiratory syndrome) sickened thousands and killed 774 people worldwide almost 20 years ago indicates that the disease caused enduring post-traumatic stress, anxiety, and depression among frontline medical workers and recovered patients.

Those two groups are now similarly vulnerable as the threat of Covid-19 abates. As the disease rapidly accelerated in January and February, Wuhan’s overwhelmed hospitals were forced to ration beds, tests and medical supplies. Overstretched doctors described wards crammed with sick patients, exhausted colleagues helpless to save the dying, and bodies lying around for hours before undertakers could remove them.

Early research suggests those experiences have impacted medical workers’ mental wellbeing. In an unpublished online survey conducted by Peking University medical psychology professor Guan Ruiyuan, around one-third of 311 respondents who served as frontline medical workers in Wuhan’s Covid-19 epidemic — a group of mostly female doctors, nurses and support staff — said they had experienced some kind of psychological issue. Another third said they thought they would benefit from some kind of online or telephone-based mental health counseling.

Using World Health Organization evaluation criteria, Guan estimated that between 33% and 39% of respondents were experiencing anxiety, depression, and/or somatic symptom disorder, which is when psychological distress manifests as physical symptoms such as pain. The most common complaints included exhaustion, sleeping poorly, and feelings of tension or unease.

Research into the psychological impacts of Covid-19 remains at an early stage, complicating efforts to draw clear conclusions. But some initial signs suggest that large numbers of Chinese medical personnel may be dealing with epidemic-related mental health issues. Last month, a preprint paper co-written by Liu Zhaorui of Peking University’s NHC Key Laboratory of Mental Health and posted for review on the website of medical journal The Lancet said that one-sixth of medical workers in China may have experienced some kind of psychological distress during the country’s Covid-19 epidemic.

As the outbreak took hold in February, teams of mental health professionals were dispatched to hard-hit areas across Hubei, the province where Wuhan is located, to provide online, phone-based, and face-to-face counseling for frontline medical workers.

Zhuo Kaiming, a 39-year-old physician at the Shanghai Mental Health Center, was one of them. When he and four colleagues arrived in Wuhan on Feb. 26, he quickly saw that frontline medical staff were unprepared for the physical and emotional onslaught awaiting them.

For some, those experiences triggered potential mental health issues that had long lurked in the background, according to Zhuo. One medical worker, whose mother has a chronic illness, described feeling intense guilt about concealing the nature of their work in Wuhan so as not to alarm their family. Others treated elderly Covid-19 patients who reminded them of their parents, leading to profound distress when some of those patients later died.

Many recovered Covid-19 patients also spent weeks in psychologically stressful environments. In Wuhan, stringent quarantine restrictions prevent patients hospitalized with severe symptoms from seeing their families in person. Additionally, many people who self-isolated at home with milder symptoms voiced fear that their conditions will deteriorate or that they might pass on the disease to their loved ones.

Other recovered patients have come home only to find themselves ostracized by the communities in which they live. Last week, a 70-year-old man surnamed Li told Caixin that friends and family members had shunned him since returning from the hospital where he was treated from Covid-19, perhaps out of fear that he still poses a risk to their health.

While the tribulations of patients and medical workers tend to grab headlines, research suggests that the dramatic measures taken in Wuhan and other parts of China to curb the spread of the epidemic may yet contribute to more widespread mental health complaints among the general public.

In February, researchers at King’s College London published a study in The Lancet concluding that living under prolonged quarantine can trigger post-traumatic stress symptoms, depression, feelings of anger and fear, and substance misuse that can persist after the measures end.

Multiple mental health professionals told Caixin Global they had witnessed heightened interest in mental health services and psychological knowledge from ordinary citizens since the start of the Covid-19 epidemic, even though many such people had not experienced physical health problems.

Zhao Jialu, a partner in charge of the psychology team at the Shanghai-based psychology services platform KnowYourself, said a team from the company had began providing free consultations for Covid-19 patients, medical workers, and people trapped in the center of the outbreak.

While KnowYourself users initially gravitated toward services for feelings of anxiety, fear, and uncertainty, as the virus continued to spread they increasingly began looking for help with feelings of fatigue, loss and hopelessness, Zhao said.

Zhu He, the head of the operations team at Sunshine Partner, a Beijing-based charity offering free phone-based counseling that is affiliated with the city’s Communist Youth League, told Caixin Global he experienced a similar uptick in demand.

In late January, Sunshine Partner began serving three neighborhoods in Wuhan with a combined population of around 600 people. So far, counselors have logged more than 20,000 hours of calls covering over 400 individual cases, with a large proportion of queries coming from young people and women, said Zhu, adding that the number of daily calls has begun to fall as the situation in the city has improved.

“The lack of interpersonal contact and communication can have many negative effects on people’s health, family relationships, and other personal connections,” Zhu said.

Experts warn that China’s fledgling mental health care sector may not be able to cope with a significant rise in psychological complaints.

According to a 2017 WHO report, the country has just 2.2 psychiatrists per 100,000 people, compared with 10.5 per 100,000 in the United States. China’s lack of mental health professionals is compounded by a restrictive law that only permits qualified psychiatrists to treat people with mental health complaints, as well as a longstanding stigma against psychological disorders.

“Even without Covid-19, I would say the shortage of mental health professionals in China is shocking. So are the numbers of people who need help and who don’t even know that they can seek help,” said Shi Xiuxiong, a Shanghai-based psychotherapist who runs two popular podcasts on mental health. “When you lay Covid-19 on top of that, it’s an even more staggering situation.”

Shi, who worked as an early-response mental health worker in the aftermath of the 2008 Wenchuan earthquake that killed at least 69,000 people, said the epidemic may present more complex mental health challenges than that disaster.

“After the earthquake hit, people quickly came together to rebuild their communities. But with Covid-19, we still don’t know what’s going to happen,” Shi said. “There’s a lot more unpredictability and uncertainty.”

That kind of prolonged stress is compounded by social distancing measures that fray the emotional ties that bind people together, Shi added. “High stress and low social support are key factors in impaired mental health. I think we might see a general increase in all sorts of mental health problems.”

Although the Covid-19 outbreak now presents a far lower threat to public health in China than it did a month ago, the possibility of new outbreaks, perhaps driven by a surge in so-called imported infections, makes the virus a lingering menace. Meanwhile, officials are scrambling to mitigate the economic damage of an epidemic that has decimated GDP growth and may lead to vast numbers of bankruptcies and layoffs.

For now, counselors can only offer temporary ways to ease the uncertainty. Volunteers at Sunshine Partner continue to spend hours consoling Wuhan’s distressed, occasionally suggesting that callers read books, play games, or record short videos of themselves in isolation to drive away negative feelings.

But Shi, the psychotherapist, says the help mental health professionals can offer is limited.

“I’d like to say we can do a lot, but in this kind of situation you realize that each therapist is just one person,” Shi said, explaining that even if there was 100 or 1,000 people in his team, it wouldn’t be enough because the “scale of the disaster is way beyond our capacity.”