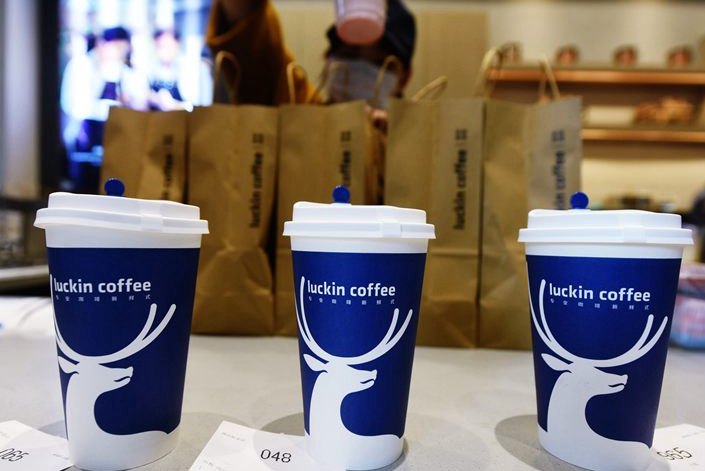 An entity controlled by the chairman of Luckin Coffee Inc. defaulted on a $518 million loan facility and another company he controls had its credit rating lowered, in the first signals of a looming credit crunch for the scandal-plagued former Starbucks challenger.

Luckin, which grew at lightning speed to overtake Starbucks as China’s biggest coffee chain by store count in just two years, has been making headlines since late last week when it announced its chief operating officer may have inflated its sales by 2.2 billion yuan ($310 million) in the final three quarters of last year. Its shares have tumbled 83% since then, wiping out more than $5 billion in market value.

Shares have also plunged nearly 40% over that period for Hong Kong-listed rental car specialist Car Inc., also founded and controlled by Luckin founder Lu Zhengyao, additionally known as Charles Lu. The latest developments could have implications for both Luckin’s and Car Inc.’s ability to secure the funding they need to continue operations as the scandal plays out.

One of the latest developments saw investment banking giant Goldman Sachs announce late Monday it was taking action after one of Lu’s affiliates, Haode Investment Inc., defaulted on a $518 million margin loan facility. Besides Goldman, other members of the syndicate behind the loan included Morgan Stanley, Credit Suisse and Barclays, the South China Morning Post reported, citing Goldman.

Goldman said it had instructed Credit Suisse to “exercise the lenders’ rights” in relation to 515 million Class B shares and 95 million Class A shares that had been pledged as collateral against the loan. Based on the company’s prospectus that states each American depositary share (ADS) represents eight Class A shares, and that each class B share can be converted into one Class A share, the pledged shares would be worth about $335 million, based on Caixin’s calculations using the company’s latest stock price.

“It demonstrates that the founders are highly unlikely to mount a personal rescue of the company,” he said. “Company cash flow is likely to decrease as consumers fail to add money to pre-paid cards. Banks and professional investors are highly unlikely to risk additional capital on Luckin at this point. The company might live off of its existing balance sheet until that becomes untenable, at which point productive assets are likely to sold and a larger pool of unproductive outlets are liquidated. The fraud could perhaps be forgiven, but the busted business model seems dispositive.”

In a separate but related development, Moody’s Investors Service said it was downgrading Car Inc.’s corporate family rating and senior unsecured rating to B2 from B1, and has placed the ratings on review for further downgrade.

“The downgrade and review for further downgrade reflect our concern that Luckin Coffee’s announcement could impair Car’s access to funding and operations,” said Gerwin Ho, a Moody’s vice president and senior credit officer, in a Monday note announcing the moves. “The action also factors in the potential challenge facing Car’s senior management in implementing its corporate strategy, since Luckin Coffee and Car share the same chairmanship.”