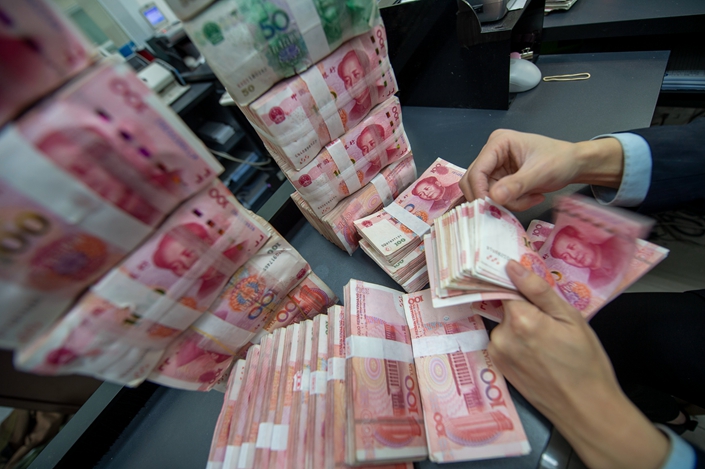 At a March 27 Politburo meeting, China’s leaders decided to ramp up monetary and fiscal responses to the Covid-19 pandemic, including issuing special sovereign debt, authorizing a higher fiscal deficit and allowing local governments to sell more bonds. But the meeting did not make clear how the money raised from STBs would be used.

Some analysts suggest STBs could be used to fund financial institutions that can in turn bail out firms that have been impacted by the pandemic.

The money could be used either to replenish the capital of commercial banks so they can increase lending to hard-hit small and midsize firms, or to provide financial institutions with capital to buy equity in the companies, Zhu Baoliang, chief economist of the State Information Center, a think tank linked to China’s top economic planning body, told Caixin. When the companies recover, the banks can sell the shares for cash, he said.

Xu Lin, chairman of the U.S.-China Green Fund, a private equity fund, said the STBs could also be used to start a national bailout fund, which would invest in companies with solid business performance and promising futures that have been put into difficult positions due to the pandemic.

STB issuance may surpass 1 trillion yuan ($141.5 billion). Economists from Nomura International Ltd. in Hong Kong estimated that the value of special treasury bonds could be between 2 trillion and 4 trillion yuan, equivalent to around 2% to 4% of GDP.

Zhao Quanhou, a researcher at the Chinese Academy of Fiscal Sciences, a think tank associated with the Ministry of Finance, said STB funds should not only flow to commercial banks, but also be used to guarantee companies and other financial institutions. It is reasonable for the financial authorities to help commercial banks and guarantee companies, as they have been instructed in recent years to take on public responsibilities by lending more to small businesses and the agricultural sector, he added.

Some analysts have suggested the authorities use STBs to directly fund businesses and individuals by providing cash transfers, investing in infrastructure, and more. But Zhao and Zhu disagree with that view, saying that as the STBs are excluded from the official fiscal deficit, they should not be used on one-time expenditures such as consumption stimulus because government fiscal revenue could not be relied on to repay the debt.

Zhao said that judging from policymakers’ intentions, international fiscal rules and the history of STBs, the money raised from selling the special bonds should flow into certain assets which can both generate income and have relatively high liquidity.

Over the past 20 years, China has issued special sovereign bonds several times. The latest issuance took place in 2007, when 1.55 trillion yuan of STBs were issued to purchase foreign exchange to set up China Investment Corp., the country’s sovereign wealth fund.

As for who will buy the STBs, economists have made a number of different predictions as the plan remains unfinished. Feng Xuming, a researcher at the Chinese Academy of Social Sciences, another state-backed think tank, said that the majority of STBs could be sold privately to state-owned banks, while a small share would be publicly issued.

A previous version of this story contained incorrect comments from Feng Xuming.