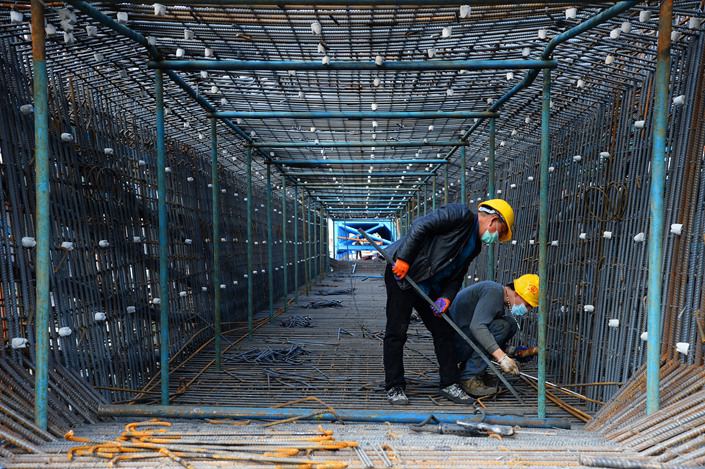 A crew works on the construction of an intercity railway line in Suzhou, East China’s Jiangsu province. Photo: People.vcg

China’s local authorities will be allowed to pump up sales of special-purpose bonds (SPBs) this year to bolster the government’s firepower in supporting the economy as it struggles to recover from the coronavirus outbreak. They are also being urged to speed up the issuance of the early quotas they have already been allocated.

The announcement was made after a meeting of the State Council, the cabinet, on Tuesday to roll out more policies to support jobs and growth as the world’s second-largest economy heads for the first contraction in quarterly gross domestic product since 1992. It followed a meeting of the Politburo on Friday that approved an increase in the national quota of SPBs along with a bigger fiscal deficit and the issuance of special treasury bonds for the first time since 2007.

“To cope with the severe impact of the current domestic and foreign epidemics on our economy, we must further increase the adjustment of fiscal and monetary policies,” Premier Li Keqiang said in a statement (link in Chinese) on the government’s website after the meeting. “The series of policy adjustments we took after Spring Festival were mainly to ensure supply and help enterprises, while the aim of this round of policy adjustments is to focus more on expanding domestic demand, helping to resume production and ensuring employment.”

The State Council didn’t quantify the increase in the overall quota or specify how much more will be allocated early to provincial-level governments. The Ministry of Finance has already given the green light to the sale of 1.29 trillion yuan ($182 billion) of SPBs, the maximum allowed under the law until the National People’s Congress (NPC) approves the quota for the full year. The delay in holding the annual meeting of the legislature is complicating efforts to raise the funds, which analysts now expect could amount to as much as 4 trillion yuan for the whole year, almost double the 2.15 trillion yuan SPB quota in 2019.

The State Council didn’t specify how the government will get around the legalities of issuing more bonds without the approval of the NPC. The legislature was supposed to meet for two weeks starting March 5 but the gathering was postponed due to the coronavirus outbreak and a new date has yet to be announced.

“On top of this year’s local government bond quota already made available, more will be expeditiously allocated in advance as per due procedures,” according to an English language statement on the government website after the meeting. “Such funding will be directed to where the projects are. It will prioritize regions with key projects, low risks and the prospect of quickly boosting effective investment and will be channelled to expediting those projects and livelihood programs.”

The State Council called on local governments to make every effort to issue the early allocation of SPBs by the end of the second quarter. “It is essential to make well-calibrated arrangements in advance to keep the projects under construction going, and launch some new projects in light of real needs,” Premier Li said, according to the statement.

SPBs were introduced in 2015 as part of efforts to clean up local government finances and make their debt more transparent. The annual quotas have grown significantly as the government has increasingly relied on state-backed infrastructure spending to support economic growth. Annual debt quotas were originally issued after final approval by the NPC at its annual session in March, but the legislature’s standing committee passed a bill in December 2018 allowing the Ministry of Finance to disburse up to 60% of the previous year’s total allocation in advance of NPC approval in an effort to push more spending into the first quarter of the year and help local governments better plan their budgets. The ministry made an early allocation of the 2020 SPB quota totaling 1.29 trillion yuan, the maximum allowed under the rules.

In the first two months of the year, provincial-level governments, the only ones allowed to issue SPBs, sold 949.8 billion yuan of the debt, almost triple the amount issued in the same period in 2019, government figures show. By March 20, they had issued a further 70 billion yuan, taking the total to 1.02 trillion yuan, an official from the finance ministry said (link in Chinese) in late March, leaving 270 billion yuan of the early quota to use up.

In order to ensure maximum impact for the bonds in bolstering overall infrastructure investment, some policies governing the use of proceeds have been relaxed. In the latest move, the Ministry of Finance in March raised the proportion of SPB money that can be used for special projects to 25% from 20%, Caixin has learned from local finance departments and researchers close to the finance ministry.