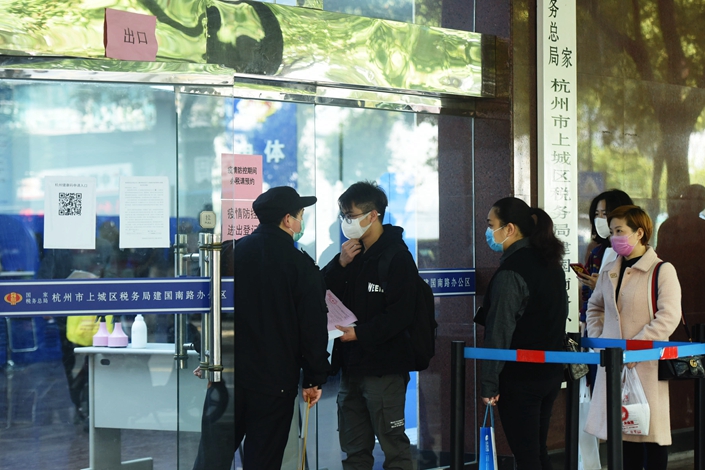 China’s economic and social order is gradually getting back to normal as the country returns to work and production. However, as the popular Chinese saying goes, “Sickness comes with the speed of an avalanche but goes like slowly reeling silk.” The East Asian nation’s economy faces second-wave shocks from the still-raging epidemic overseas.

Governments at all levels in China should leave no stone unturned in helping businesses and ordinary citizens make it through this tough time, and both central and regional authorities have announced many policies aimed at doing just that. When they are implemented and built upon, we must ensure that they address the needs of people, not just material concerns.

The main reason why China needs rescue packages that put people first has to do with the nature of the coronavirus’s impact on the economy and the characteristics of China’s current development trajectory. The Covid-19 epidemic has wrought more economic damage than the 2008 global financial crisis, but this damage stems from social distancing measures that have harmed supply chains, endangered cash flows, and disrupted other kinds of activity.

If the outbreak ends before it overwhelms the capacity of economies to adapt, then policies will be able to cope and the impact will be a one-off. But if it persists in the long term, then policies will not be able to deal with the structural problems in the economy that the virus will exacerbate. That would lead to a more generalized recession.

In addition, China is transitioning from a mainly manufacturing-based economy to a services-oriented one. The services sector — especially the catering, accommodation, and travel industries — have been the biggest casualties of the epidemic so far.

At the start of the outbreak, some spoke of a stimulus policy akin to the 4 trillion-yuan ($564 billion) package China rolled out after the financial crisis. The notion of an infrastructure-building spree to offset the economic damage has also returned to favor. But China’s economy has long passed the point where such a 2008-style buildout would be effective. Perhaps there is more space and demand for “new infrastructure” — which includes things like 5G, artificial intelligence, and the internet of things — but they are still far from the scale of traditional infrastructure and cannot prop up the economy by themselves.

Any rescue package must prioritize the need to shore up the cashflows of distressed businesses and people on mid-to-low incomes, and not simply become a simple stimulus policy or countercyclical intervention. In the first phase, government assistance to businesses should maintain liquidity while laying out stage-by-stage reductions to social insurance, handing out subsidies to prevent job losses, and providing higher rates of return on unemployment insurance payments.

Currently, the policy focus has shifted to financial support like offering more loans and rebates and extending repayments of the principal plus interest on existing loans. On March 31, the State Council — China’s cabinet — expanded financial support for micro, small, and midsized businesses, something that will certainly be of great help to many companies, workers, and families.

In implementing a string of rescue policies, we must bring funds into special budgets, plan for their use, and work together to ensure the money goes where people go. We must be publicly transparent, making sure that policies not only resolve our current problems, but also long-term issues.

In particular, we must increase efforts to plug the shortcomings in the Chinese economy that hinder its high-quality development and continue to increase investment in long-neglected human aspects of our economy like education, medical care, and professional training. In the city of Wuhan and the surrounding province of Hubei, where the Covid-19 outbreak has been most severe, we must roll out special, more powerful rescue policies. Considering the current difficulties with local government financing, we think the central government should cover most of the fiscal responsibility for this.

There has been much debate in China recently about which policy tools to use. Some suggest offering businesses more reductions in taxes and fees, others say we should hand out “consumption vouchers” to residents, and still more advocate direct cash payments to citizens. The participants in this debate have shown commendable zeal and brought useful ideas into government policymaking at all levels.

However, some suggestions have veered into absolutist thinking instead of showing a willingness to be flexible about the relative advantages of different policy tools. It is true that we need to weigh each option carefully when government finances are so tight. But each policy has different uses, is targeted at different groups, and will take effect over different periods.

Reducing taxes and fees will help businesses operate on a stronger basis, but it won’t do much more than that. Then there’s the fact that the epidemic will dramatically slash many companies’ revenue and lead to bankruptcies, meaning the reductions could become a kind of empty bank cheque.

Consumption vouchers have rapid effects in the short-term but offer little in the way of long-term solutions. And while cash transfers are the simplest and most convenient measure of all, some people might deposit them as savings instead of spending them. For this reason, governments must issue some kind of combined voucher.

The overwhelming target of rescue policies is to stabilize employment. As Premier Li Keqiang recently said, “Only if employment stabilizes this year will the ups and downs of economic growth become less serious.”

Yet some kind of bankruptcy wave is surely still unavoidable. Governments at all levels must pay attention to how much money the jobless have in their pockets and guarantee the adequate distribution of unemployment insurance and temporary living subsidies.

At the very least, they must provide unemployed people enough money to live on and strengthen access to training programs to increase our human capital. The current system of social aid provides some support, but it suffers from narrow coverage. In addition to people living below the government-defined poverty line and those eligible for welfare payments, there are vast numbers of people living in precarity whom the state must incorporate into the system.

It must be admitted that the sudden outbreak of Covid-19 has revealed some of the shortcomings of China’s governance system and the consequences of the less-than-smooth progress of systemic reform. In the last few years, the central government has cut through red tape, improved the business environment, and clearly defined the principle of competitive neutrality. However, the vast majority of micro, small, and midsized businesses are still just scraping by on meager profits and few assets to fall back on. Many of them now face ruin amid the epidemic.

That’s why we’re so adamant that the rescue strategy must be people-based. This notion must become the starting point for further reforms in the mid- to long-term. Only by accelerating and deepening reforms to the social insurance system, the household registration system, and state-owned enterprises — things that have been on the agenda for a long time already — as well as by promoting greater urbanization can we revive the confidence of micro, small, and midsized businesses and encourage ordinary people to start investing in them again.

On the global level, nobody yet knows how the Covid-19 pandemic will turn out. Governments, businesses and individuals must all prepare for the virus to stick around for some time to come. Many countries have already taken action to support their economies on both the macro and micro levels, a key step in coordinating the global response to the virus.

China has certain advantages compared with other countries, but it can also learn from them. In particular, we must think clearly about what policies abroad we can and cannot learn from — such as the U.S.’s cash transfer plan — understanding the lag between China and advanced countries in terms of the development of the market economy and social governance system, and accurately concluding what we’ve done right and what we’ve done wrong in combatting the epidemic.

A few insightful people have pointed out that we must guard against the kind of planned-economy thinking that often follows government disaster relief. That fear is not baseless considering the current atmosphere in China. Only by upholding market reforms can we pull off a rescue act that puts people at its center.