Editorial: Covid-19 Pandemic Might Drag On. China Should Prepare, and Prepare to Lead 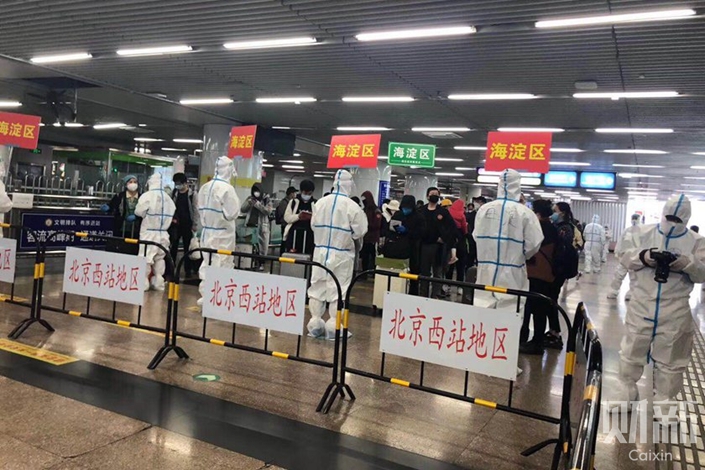 Last Wednesday, some 76 days after the start of an unprecedented citywide lockdown, authorities in the central Chinese city of Wuhan began easing restrictions on outbound travel, marking a symbolic event in China’s battle against its deadly Covid-19 epidemic.

The same day, China’s Politburo Standing Committee — a body consisting of the country’s top leadership — demanded that people “make proper ideological and work preparations for responding to changes in the external environment in the relatively long term.” The committee also stressed the need to further disease control efforts and economic and social development.

Many public health experts think that there is little chance of the pandemic ending in the short term. Indeed, some say it is likely that the impact of the disease may come in several cycles spanning years. Because future prospects are hard to predict, China should pivot away from its current “short, sharp shock” approach to disease control and move toward a bitterer and more protracted war against the virus.

The hardship of that long-term battle lies firstly in the continuing threat of so-called imported Covid-19 cases and asymptomatic infections. In addition, the pandemic has already taken a huge toll on Chinese society and the economy, one that will be difficult to recover from in the near term.

Further sharpening the uncertainty is the fact that the domestic impact coincides with the risk of an international economic recession. While China has started to address whether its disease-control model can switch between a wartime and emergency footing and adapt to the demand to restore order to productive life, the difficulties remain onerous. Clearly, we can only get back to work once we’ve properly contained the outbreak, but we must also recognize the inherent conflict between strict disease control and social and economic vitality.

At present, we must guard against two kinds of extreme thinking. One is complacency. We mustn’t let down our guard when it comes to disease control, especially in regions like Hubei, the central province where the worst of China’s outbreak took place and where the risk of a second wave of infections is comparatively high.

But we must also avoid the other extreme, namely retaining an iron grip on quarantine measures and the movement of people. In low-risk areas, we should create more convenient conditions for businesses to restart production, instead of weighing them down with excessive bureaucracy. Effective disease control, economic resilience, and social vivacity will be the hallmarks of our long-term fight against the coronavirus.

As a fundamental idea, a general plan to curb imported cases while guarding against a rebound in domestic infections must be backed up by specifics. The biggest risk of a rebound currently comes from people who have contracted the disease abroad entering China. Last week, a spate of new Covid-19 cases in the northeastern province of Heilongjiang underscored the importance of disease control in China’s border cities.

The same risk applies to potentially infected people traveling across city or provincial jurisdictions. Domestically, we must remain particularly on alert for asymptomatic infections. Even though a repeat of a serious outbreak like Wuhan’s is unlikely, we mustn’t downplay the local risks.

We must continue to draw up differentiated prevention and control measures according to low-, medium-, and high-level risks. That means we must tailor measures to local conditions and adjust them over time. If our work up to now has been geared toward curbing the spread of the outbreak, then our job from now on is to get society and the economy up and running again.

It is right not to arbitrarily require people leaving Wuhan to supply any additional paperwork than people in the rest of Hubei. If the number of infections doesn’t rebound, then all manner of restrictions will later be lifted, accelerating the process of getting back to work. On this question, we still think that the government ought to play a service-based and supporting role instead of a merely supervisory one.

Every part of the country must respect not only the judgment of medical experts regarding the epidemic, but also the desires of businesses. We must recognize that business owners are hungrier than most to get back to work, but also need to give all-round consideration to the risk of disease. Their opinions are worth listening to.

Until now, governments at both the central and local levels have issued a flurry of policies to support businesses, industries and groups hit hard by the epidemic. In implementing these policies, we must pay particular attention to the impact of the outbreak on society’s most vulnerable and guarantee the basic livelihoods of those in difficulty. The largest affected group is rural farmers, who are some of Chinese society’s most voiceless and most easily ignored.

Globally, the pandemic continues to spread. Although Europe and the United States may be about to turn the corner, the standard of disease prevention in developing countries is concerning. The International Monetary Fund predicts that the world economy will plummet into negative growth this year in the worst such downturn since the Great Depression.

Looking at the overall trend, no country has yet pulled itself out of this situation. However, experts said last week that China, which was first hit by the pandemic, is also among the quickest to recover. The country’s government has commendably responded with a staggered macroeconomic policy that foregrounds the role of China, Japan, and South Korea as the core links in East Asian supply chains.

Globalization has made the world closely interconnected. As one IT industry insider recently told Caixin, “if we can’t get webcams now, the entire supply chain will be cut off.” This is a realistic reason why we need global coordination on the pandemic.

As a major power that managed to control its outbreak early, China should fly the flag for international cooperation. The world has borne witness to the Chinese government’s sincerity in the fields of scientific knowledge-sharing, medical support, and material aid and Chinese scientists have maintained close cooperation with their overseas counterparts throughout. However, some countries remain suspicious of the Chinese government’s conduct during the initial stages of the epidemic. China’s best response would be to keep doing the right things.

We often say that China has a resilient economy with abundant potential and enough room to be flexible. These advantages will surely come to the fore as the country gets back to work. However, they will not last forever and must not be whimsically frittered away. Instead, they must be worked into the cornerstone of the country’s governance system.

Recently, the top leadership issued suggestions on how to improve market mechanisms for the distribution of essential resources. We believe the overall thrust of these suggestions is correct, and look forward to reading how they will be implemented.

One important question under discussion by market players is whether the Covid-19 pandemic will spark the “de-Sinicization” of global supply chains, or draw countries even closer to China. The answer doesn’t hinge on needless squabbles, but on whether China can fight an effective long-term battle with the disease while also deepening supply-side reform.