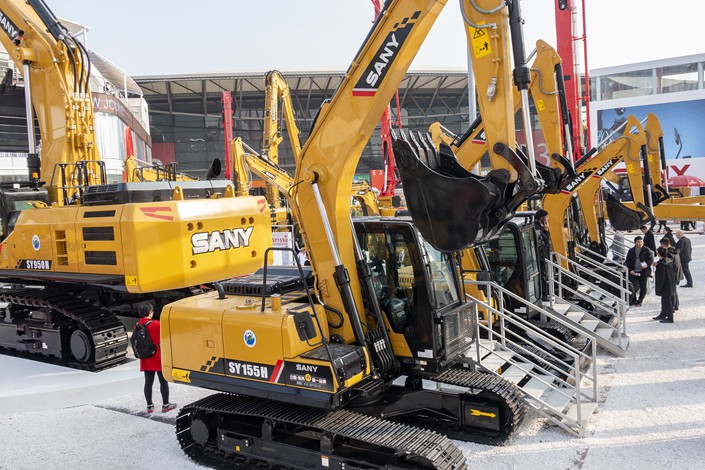 Excavator sales are one of the indicators analysts use to gauge the state of investment in infrastructure and property.

As the epicenter of the coronavirus pandemic moves outside China, multiple major construction equipment makers have raised the prices of their excavators amid rebounding domestic demand and the rising cost of imported components.

Sany Heavy Industry Co. Ltd. on Saturday said its smaller excavators will become 10% more expensive and the prices of its medium and large excavators will go up by 5%, according to (link in Chinese) industry group the China Construction Machinery Association (CCMA). Sany confirmed the information with Caixin.

The Shanghai-listed company is not the only heavy-equipment manufacturer to take this step, with its peers including Xuzhou Construction Machinery Group Co. Ltd. (link in Chinese) also raising their excavator prices recently.

“The overseas epidemic situation has been increasingly serious, global industrial chains have been heavily impacted, and the overall cost of production has risen sharply,” Sany said in a statement.

The excavator industry relies on imports from Japan and Germany for some core components, the prices of which have grown in recent weeks due to global supply chain disruption, a person at a major Chinese manufacturer told Caixin.

In March, China’s 25 major excavator producers sold 49,408 units of the dirt-moving machines, mostly inside China, according to CCMA data (link in Chinese). That was the most monthly sales since 2006, according to data compiler CEIC.

Excavator sales are one of the indicators analysts use to gauge the state of investment in infrastructure and property, which contributes a big part to the Chinese economy.

China has been boosting infrastructure spending to bolster its faltering economy, as the coronavirus outbreak largely put a hold on many sectors at the start of the year. In the first two months, several key economic indicators plunged by double-digit percentages for the first time since records began. Government-driven infrastructure investment plunged a sharp 30% year-on-year.

To give the country’s economy a leg-up, the central government has urged local authorities to speed up the issuance of special-purpose bonds, which are used to raise money for public works, including infrastructure projects.

Some 1.1 trillion yuan ($155.8 billion) of these bonds were sold in the first quarter this year, up more than 50% year-on-year, according to data (link in Chinese) from the Ministry of Finance. Around 70% were to be used for infrastructure spending, more than double the percentage in the same period last year, according to a recent research note by Essence Securities Co. Ltd.