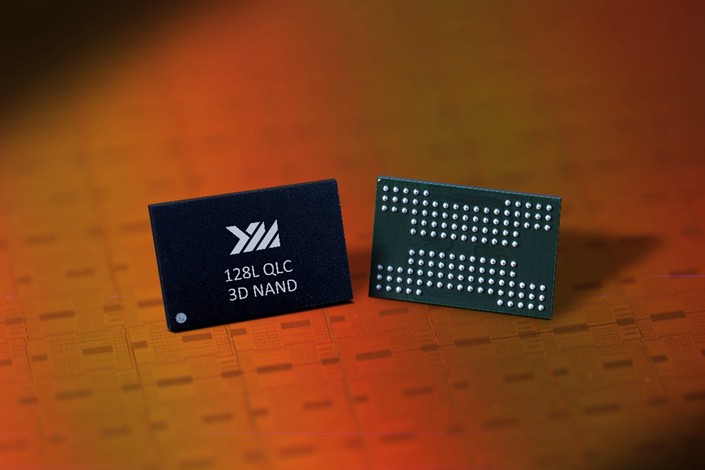 The company, based in the Covid-19 stricken city of Wuhan, said its new chip, the X2-6070, has passed sample verification with several partners, and could start mass production by end of this year or in the first half of 2021. The rollout makes it China’s first NAND chip using 128-layer technology, where the number of layers determines the density of data storage.

The new chips will come in two specifications, one featuring 1.33 terabytes of storage and the other 512 gigabytes, according to a company announcement dated on Sunday. Yangtze Memory hopes the 1.33 TB product will initially be used in high-capacity USB drives, flash memory cards and solid-state hard drives, and eventually be expanded into enterprise-level servers and data centers, said senior vice president Grace Gong.

Since its founding just four years ago, Yangtze Memory has been playing catch-up with more established global players like South Korea’s Samsung and SK Hynix, as well as U.S. chip giant Micron Technology. It is currently about a generation behind many of its global peers, but is closing the gap. SK Hynix and Micron both began mass production for 128-layer 3D NAND around the middle of last year, while Samsung also announced a 132-layer product during the year.

“As a newcomer to flash memory, Yangzte Memory has been able to leap from 32 layers to 64 layers to 128 layers in just three years,” Gong said.

Registered in July 2016 and backed by Chinese chip aspirant Tsinghua Unigroup as well as several local and national government-supported tech funds, Yangtze Memory plans to invest $24 billion over three phases with an aim to become China’s first homegrown 3D NAND champion. TF Securities estimated Yangtze Memory could have about 5% of the global NAND market by next year, which would make it the world’s seventh largest manufacturer.

China is investing billions of dollars in a bid to build such champions to lessen its heavy dependence on imported chips that power everything from smartphones to other high-end devices like computers and self-driving cars.

Yangtze’s latest chip unveiling came earlier than industry expectations, despite broader business disruptions caused by Covid-19 that were particularly intense in Wuhan, the outbreak’s epicenter. CEO Yang Shining revealed last month that even after the city was put under an unprecedented lockdown, Yangtze Memory continued operating throughout the outbreak and was even able to keep shipping its products to Shanghai with local government assistance.

Last month, research house Gartner forecast that weaker demand for smartphones, cars and other devices would reduce global chip sector revenue by $55 billion this year, resulting in a 0.9% decline in annual sales to $415.4 billion. But it forecast NAND revenues would rise 40% due to a shortage dating back to last year.